“My God, I think there have been more books on Marilyn Monroe than on World War II, and there’s a great similarity.”

So said Billy Wilder, who made two classic films with Monroe – and although the great director was prone to exaggerate, he had the battle scars to prove his point. Marilyn Monroe: The Classic Performances is the latest in an ongoing series from the prolific Chris Wade – a musician and filmmaker in his own right, with an admirable DIY ethic – whose past subjects include Marlene Dietrich, Sophia Loren and Madonna. END_OF_DOCUMENT_TOKEN_TO_BE_REPLACED

In 1954, Marilyn Monroe was rehearsing ‘Do It Again’ as part of her show for U.S. troops in Korea, when the officer in charge of her tour deemed the Gershwin standard “too suggestive,” and insisted she change the title to ‘Kiss Me Again.’ “People had a habit of looking at me as if I were some kind of mirror instead of as a person,” she remarked in her memoir, My Story. “They didn’t see me, they saw their own lewd thoughts.” Her comment inspired the title (and epigraph) for a new book, Some Kind of Mirror: Creating Marilyn Monroe by Amanda Konkle, assistant professor of literature and film studies at Georgia Southern University. END_OF_DOCUMENT_TOKEN_TO_BE_REPLACED 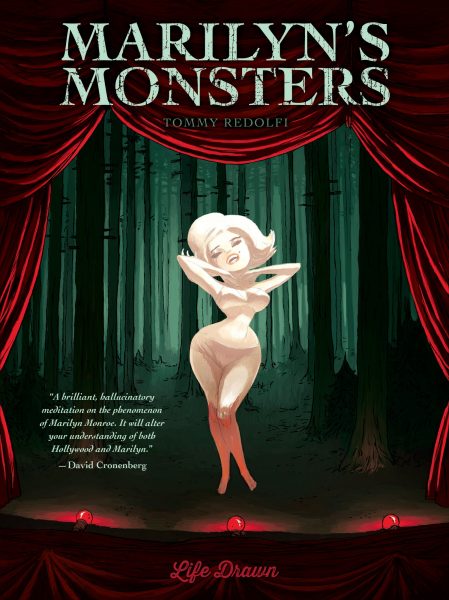 Marilyn Monroe has long been an inspiration to artists and writers. Among the many books devoted to her life and image are a number of comics and graphic novels. Kathryn Hyatt’s Marilyn: The Story of a Woman (1996) and Dana Gachman’s recent contribution to the Tribute series both opt for fairly conventional, if sympathetic narratives. It is from outside the USA that more imaginative retellings have emerged, such as Sergio Toppi’s 16-page comic, plus two full-length books: Jean-Francois Charles’ Shooting Star (2006) and Jose Correa’s Dreams of a Butterfly (2012.)

Tommy Redolfi’s Holy Wood was first published in France in 2016, and is now available in English as Marilyn’s Monsters, published by Life Drawn, a literary imprint from comic book publisher Humanoids. The French-born Redolfi now lives in Los Angeles, and has made several films as well as other graphic novels, including a 2007 tome about one of Marilyn’s idols, Mae West. Marilyn’s Monsters comes with an endorsement from cult filmmaker David Cronenberg: “A brilliant, hallucinatory meditation on the phenomenon of Marilyn Monroe. It will alter your understanding of both Hollywood and Marilyn.” END_OF_DOCUMENT_TOKEN_TO_BE_REPLACED

On June 1st – exactly ninety-two years after Norma Jeane Mortenson was born in the charity ward of Los Angeles General Hospital – her 1954 movie, There’s No Business Like Show Business, was screened at the Duke of York’s Cinema in Brighton, and will be shown at selected Picturehouse venues throughout June. The first musical made in CinemaScope (a pioneering widescreen technology developed by Twentieth Century Fox to combat the threat of television), it was also one of the last Technicolour musicals made under the studio system model of Hollywood’s golden age.  END_OF_DOCUMENT_TOKEN_TO_BE_REPLACED

In the wake of last fall’s revelations about sexual harassment in Hollywood, some were quick to point out that this was not a new phenomenon. Actress Joan Collins claimed that Marilyn Monroe had warned her about the ‘wolves’ who preyed on young starlets. Mira Sorvino and Ashley Judd, who played dual roles in a TV movie about the legendary star, revealed that they were later blackballed for resisting unwanted advances. And a producer on the 2011 biopic, My Week With Marilyn, recalled how disgraced movie mogul Harvey Weinstein loitered on the set while Michelle Williams filmed a nude swimming scene.

Just as Monroe’s glamorous image has come to symbolise Hollywood’s golden age, she has also been linked to its darker side in a way that risks over-simplification. For not only was she one of the first to speak out about sexual abuse, she also battled for equal rights and fair pay, which women are still fighting today in Tinseltown and beyond. Michelle Morgan, author of Marilyn Monroe: Private and Undisclosed, paints a fuller picture in her new book, The Girl: Marilyn Monroe, The Seven Year Itch and the Birth of an Unlikely Feminist. END_OF_DOCUMENT_TOKEN_TO_BE_REPLACED