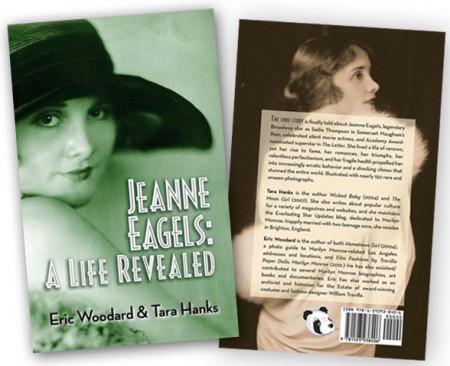 “Jeanne Eagels: A Life Revealed offers a startling look at the actress and her times … packed with detail and drama, and does bring Jeanne Eagels into 21st century focus as an ambitious, driven woman who often fought the system, but could not defeat her own demons.” – Liz Smith, New York Social Diary

“Their research, to this reader, sparkles and shines …. the kind of meat one likes with this rich meal of a book.” – Stephen Michael Shearer, author of Gloria Swanson: The Ultimate Star

“It’s as if F. Scott Fitzgerald penned her life’s story … Eric Woodard and Tara Hanks have expended an exceptional effort in presenting Jeanne Eagels, through the record of her life and her accomplishments, and through the memories of those who knew her.” – David Marshall James

“One of the most beautiful and fascinating of the great stage stars … this book is revelatory, restoring her to her rightful place as a major actress.” – Steffan B. Aletti

“You come away with a feeling that you’ve just studied a portrait of the subject as painted by a master artist.” – George Larkin