This photo was taken in Brighton just two winters ago, but it already feels like a distant memory. Founded in 1910, the Duke of York’s is the oldest operating cinema in Britain, and I’ve been a customer, on and off, for the last quarter-century. The last film I saw there, back in February, was (ironically) Parasite. After four months in lockdown the Duke’s reopened in July, but by October its parent company Cineworld had announced that all theatres would close indefinitely. Now this grand old building is boarded up, a sorry sight – and it’s just one of many venues facing an uncertain future. I’ve really missed the cinema, though streaming has offered an alternative of sorts. As an old friend told me recently, we all need a little glamour in our lives – and so I hope 2021 is kinder to the arts than this year has been. END_OF_DOCUMENT_TOKEN_TO_BE_REPLACED

A beautiful, dark-haired woman flees from a car wreck and wakes up in a stranger’s apartment, suffering from amnesia. When asked her name, she looks at an old movie poster on the wall, and focuses on its star: “Rita.” This pivotal moment from Mulholland Dr. (2001) adorns the cover of a new book about director David Lynch, as it was that film which sparked the interest of its two authors. END_OF_DOCUMENT_TOKEN_TO_BE_REPLACED 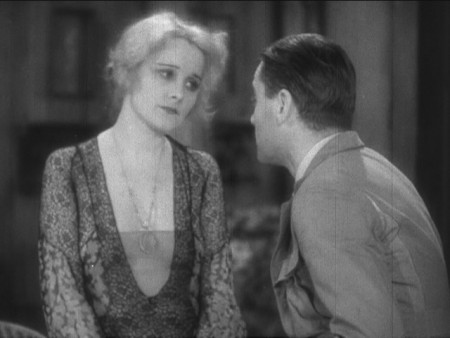 Jeanne Eagels confronts her lover, played by Herbert Marshall, in ‘The Letter’ (1929)

A viewing of Bette Davis’ The Letter remake led one blogger back to Jeanne Eagels’ original performance as the murderess Leslie Crosbie, over at Classic Hollywood:

I re-watched it to see if there was anything noirish about it and wasn’t disappointed. Jeanne’s performance is powerful, the French director Jean De Limur also had scenes that wouldn’t disappoint noir fans. Jeanne Eagels descending the stairs to meet with her murdered lover’s Chinese mistress is pure noir cinematography. I must say this version is my favorite version of W. Somerset Maugham’s The Letter.

Although a work-print has been available for some time, a fully restored version of The Letter (1929) was released on DVD in 2011.

Born into a grand English theatrical family, Ida Lupino found fame in the film noir genre, starring in They Drive By Night and High Sierra with Humphrey Bogart, and with Jack Palance in The Big Knife. Fiery yet delicate, she was one of the most gifted actresses in Hollywood. But her story does not end there. Multi-talented, she also wrote scripts and composed music. She became one of the first female directors, concentrating on drama, realism and social commentary. Though she is now something of a feminist icon, Lupino was a woman of her time and downplayed her achievements. As the film industry declined throughout the 1950s, she moved into television. It’s hard to explain why this pioneering artist is not more celebrated, with many of her greatest films still not available on DVD.

To see a video montage of her work, click here

Veteran Hollywood actor Richard Widmark has died aged 93. A former teacher, he found fame playing the bad guy in Kiss Of Death, and went on to appear in classics of the ‘film noir’ genre such as Pickup On South Street, Judgement At Nuremberg, and Don’t Bother To Knock with Marilyn Monroe. END_OF_DOCUMENT_TOKEN_TO_BE_REPLACED