Augustus George Andrews was born in London on April 10, 1868. He was educated at Harrow, one of Britain’s leading public schools. He worked for the publishing house owned by his father, William Joseph Arliss Andrews, before leaving at eighteen to pursue a life on the stage. After a long apprenticeship in provincial theatre, George Arliss established himself as a supporting actor in London’s West End.

In 1899, Arliss married actress Florence ‘Flo’ Montgomery Smith, who became his frequent leading lady. On her advice, he sailed to New York in 1901 with a troupe led by Mrs Patrick Campbell. He went on to join another company led by a female entrepreneur, Mrs Fiske. In 1908, the forty year-old Arliss finally achieved stardom in The Devil. Three years later, he was cast in what would become his most celebrated role – Disraeli – a portrait of the nineteenth century British Prime Minister that had been tailored for Arliss, enjoying an extraordinary five-year run on Broadway and beyond.

After two months on tour, actress Margery Maude was leaving to appear in another production. Arliss was excluded from the decision, except in his choice of replacement. He was less concerned with acting ability and beauty than the weight of the actress, because in one scene he would have to carry her across the stage. After stating at her audition that she weighed 117 pounds, Jeanne Eagels was asked to jump into the actor’s arms to prove it.

During rehearsals, Jeanne expressed strong opinions on how her role was to be played. While this infuriated the seasoned thespian, Arliss also saw a spark of genius in the twenty-six year-old actress and took her ideas seriously. For her part, Eagels found Arliss too methodical – even fussy – although she came to respect his devotion to the craft.

The Professor’s Love Story opened at the Knickerbocker Theatre on February 26. Jeanne would be pulling double duty over the following weeks: filming in New Jersey by day, and treading the boards on Broadway at night. The play closed on April 7. By then, Jeanne had been cast in Arliss’ revival of Disraeli, due to open on April 9. She and Arliss had performed the final act on March 30, during an Anti-Vivisection Benefit held at the Knickerbocker.

Arliss’ signature piece re-enacted Benjamin Disraeli’s attempt to gain control of the Suez Canal through finance. Jeanne was to play Lady Clarissa Pevensey, replacing Elsie Leslie in the original production. Lady Clarissa was one of several fictional characters created to support the leading man, and critics found Jeanne “delightful” in her aristocratic role. Disraeli’s Broadway run ended in the third week of May. This must have been a great relief to Jeanne, who was already working on another film.

The final Arliss-Eagels collaboration was co-written by Arliss and inspired by the life of Alexander Hamilton, Secretary of the Treasury during George Washington’s first Administration. Jeanne was cast as Maria Reynolds, Hamilton’s erstwhile mistress, while Florence Arliss played Mrs. Hamilton. Mrs. Reynolds’ husband, a former Commissary officer of the American Revolution, blackmailed Hamilton over the affair. Hamilton opened in Atlantic City’s Apollo Theatre on September 6, transferring to the Knickerbocker Theatre eleven days later. The play closed in New York after eighty performances and proceeded to tour until April 1918.

George Arliss had nothing but praise for his co-star. “Three distinct parts, each played with unerring judgement and artistry!” he said. “She has the vital sense of time. Hers was the talent of making a role a character, epitomizing biography and stepping on to the stage as a person, not a part.” Like Arliss, Eagels would become indelibly associated with one role in particular: that of Sadie Thompson in Rain. 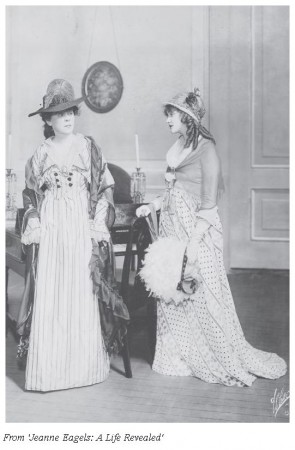 Arliss made his movie debut with a silent adaptation of The Devil in 1921, followed by Disraeli, with Louise Huff as Clarissa. He scored another Broadway success as the Rajah of Rukh in The Green Goddess, which also transferred to the screen. His final stage roles were in John Galsworthy’s Old English (1924), and as Shylock in a 1928 revival of Shakespeare’s The Merchant of Venice.

In 1929, Arliss remade Disraeli as a talking picture, with Florence Arliss reprising her role as Lady Beaconsfield, and a young Joan Bennett as Clarissa. Arliss was given unprecedented artistic control for an actor in the studio era. Working closely with Darryl F. Zanuck – first at Warner Brothers, and later at Zanuck’s newly-formed 20th Century Pictures – Arliss was permitted to choose his director and co-stars, and rewrite scripts. In Alexander Hamilton (1931), June Collyer played Maria Reynolds, the role created by Jeanne Eagels. In 1932, Arliss helped launch the career of an actress often compared to Eagels, when he insisted that newcomer Bette Davis be cast in The Man Who Played God.

The Arlisses starred in Cecil B. DeMille’s 1938 radio production of Disraeli before travelling to London in April 1939. The outbreak of World War II prevented the couple from returning to America, and in 1941, Arliss was prosecuted under a new British law for failing to report his bank accounts in the US and Canada. He remained in London throughout the Blitz years, before settling in Pangbourne, Berkshire.

George Arliss died, aged seventy-seven, of a bronchial ailment in Maida Hill, London, on February 5, 1946. He is buried in the All Saints churchyard at Harrow Weald. His wife, Florence, passed away in 1950.