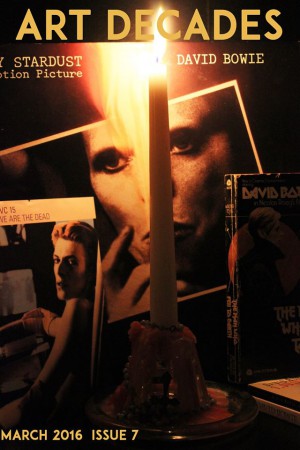 Ever since the death of David Bowie in January, there has been an outpouring of public grief. Not corporate-led, but a genuine groundswell of feeling from generations of fans to whom Bowie was not just an idol, but an inspiration.

‘Art Decade‘ was, of course, an instrumental track from his 1977 album, Low – first in the Berlin Trilogy. It’s not surprising, then, that the cover of Art Decades: Volume 7 shows a glimpse of editor Jeremy Richey’s personal collection. ‘I took this particular photo using only the solitary candle (a nod to one of the most striking images from Bowie’s final album) as the sole light source,’ he comments. ‘The photo also contains the actual copy of the very first Bowie album I bought almost 30 years ago in my mid-teens, as well as nods to a Bowie/Kentucky connection, his interest in the occult and his most underrated album (see if you can spot the clues.)’

Inside, Bryce Wilson looks back at Bowie’s 2002 album, Heathen, and Steve Langton and Michael A. Gonzales share memories of growing up with his music. Emily Clare Bryant and Anthony Crowley contribute Bowie-themed poetry; artist Giles Glasscock draws on Bowie’s many visual guises, while filmmaker Niremberg maps his influences, and the musicians he inspired. There are also two photo shoots, based on ‘Lady Stardust’ (by Whitley Brandenburg) and ‘Teenage Wildlife’ (by Kelley and Jeremy Richey.) Sadly, Bowie isn’t the only rock legend we’ve lost lately, as Heather Drain reminds us in her tribute to Lemmy.

Elsewhere, Jeremy interviews Peter Guralnick, acclaimed biographer of Robert Johnson, Elvis Presley, Sam Cooke, and most recently Sam Phillips, head of Sun Records. I was interested to learn that Peter also writes fiction. Post-punk icon Andi Sex-Gang, ‘scream queen’ Erin Russ, and Kentucky performance artist Rob Hampton are also profiled. There are reviews of Tinto Brass’ Paprika on Blu-Ray, and a look back at the films of the Wachowskis. An extract from Marcelline Block and Barry Nevin’s latest book, French Cinema and the Great War, and ‘Can’t Fall Down’, a short story about New York nightlife by screenwriter Les Bohem, are also featured.

Finally, my review of Madonna’s Rebel Heart – from the album leak to the tumultuous tour – is spread over eight pages. It was a labour of love for me, and after seeing the lavish layout, I felt I’d been given the star treatment! As always, Art Decades: Volume 7 is available from Amazon (at £12.53 in the UK, or $18 in the US.) And if you’d like to make a direct subscription, click here.