Leslie Howard Steiner was born in Forest Hill, South London, on April 3, 1893. His mother, Lillian Blumberg, came from an upper middle-class family who initially disapproved of her choice of husband, the Hungarian Ferdinand Steiner. The Steiners briefly moved to Vienna, returning to London when the rift was healed. They had four more children, and changed their name to the less Germanic ‘Stainer’ at the outbreak of World War I.

Leslie was first educated from home, then at Alleyn’s School in Dulwich. An average student, he was encouraged by his mother in his love of writing and theatre. But his father insisted he take a conventional job, and he worked as a bank clerk before enlisting in the British Army. However, his service came to an end when he suffered shellshock in 1916. That year he married Ruth Evelyn Martin, and they later had two children.

He began acting on the London stage, and touring, in popular plays like Peg O’ My Heart, Charley’s Aunt and East is West, before crossing the Atlantic to try his luck on Broadway. In 1920 he founded British Comedy Films, producing and acting in several shorts. His early successes on the New York stage included A.A. Milne’s The Truth About Blayds and The Romantic Age (1922); and Outward Bound (1924.)

In 1925, he appeared in A.H. Wood’s production of The Green Hat, adapted from Michael Arlen’s bestselling novel and starring Katherine Cornell. Howard’s next play was also produced by Woods, and would make him a star. Her Cardboard Lover was based on Jacques Deval’s romantic comedy about Simone Lagorce, a Parisian boutique owner unhappily involved with a married man. Desperate to end the affair, Simone hires Andre, an impoverished young gambler, to act as a buffer between herself and her former paramour, and finds herself falling in love with him.

With Jeanne Eagels in ‘Her Cardboard Lover’ (1927)

On March 21, Her Cardboard Lover opened at the Empire Theatre, with Jeanne Eagels as Simone. “After a shaky start, Miss Eagels swept it away magnificently, playing several scenes with an almost fey charm and delicacy and plunging into the romp of the comedy with true comic spirit,” Alexander Woollcott observed in his column for the New York World. “Only to experience, when she responded to the booming calls at the end of the penultimate act, the pang of hearing that unruly audience yell ‘Howard, Howard’ …”

Another critic, Percy Hammond, reported that “the star, with apparent pleasure at her leading man’s popularity, stepped to the footlights and said, ‘I thank you on behalf of my cardboard lover.’”

But in general, the press was no kinder than the audience. While some appreciated Jeanne’s venture into light comedy, most singled out Howard’s performance as the one to watch, and he became the target of her pent-up fury. She ordered the stage manager to move his dressing room across the theatre. When their paths did cross, she ignored him. Even onstage, Leslie wasn’t safe. 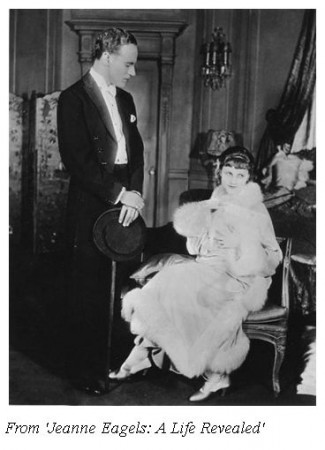 On July 18, the producers announced that Her Cardboard Lover would close in twelve days and reopen in Chicago in late September. Rumours had been circulating for a month that Howard wanted to quit the show, but management denied this, saying he would join the supporting cast on tour. Burns Mantle’s August 7 column suggested that Leslie would no longer have to endure the slings and arrows of his former leading lady, as the actor was currently mounting his own play, Murray Hill, and had plans to open in John Galsworthy’s Escape come November.

Howard had said goodbye to Jeanne but not Andre. Her Cardboard Lover moved to London in 1928, where he recreated his ‘smash success’ with Tallulah Bankhead. They were alleged to have become lovers, and despite his long marriage, Leslie was widely regarded as a ladies’ man. Meanwhile, Jeanne Eagels began a nationwide tour of Her Cardboard Lover in October, with another Englishman, Anthony Bushell, replacing Howard.

His next West End play, Berkeley Square – about a young American transported to London to meet his ancestors at the time of the American Revolution – was another hit, later transferring to Broadway. In a 1930 adaptation of Outward Bound, he made the transition from stage to screen, establishing himself as a romantic lead opposite Norma Shearer in A Free Soul (1931) and Smilin’ Through (1932); and as an adventure hero in The Scarlet Pimpernel (1934), while the 1935 adaptation of Berkeley Square earned him an Oscar nomination. 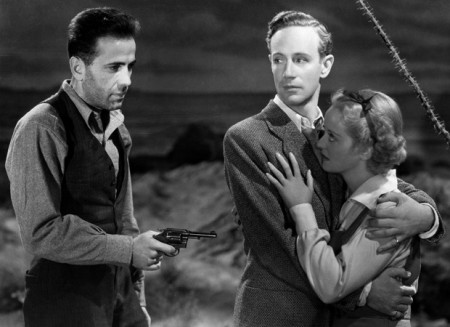 With Humphrey Bogart and Bette Davis in ‘The Petrified Forest’ (1936)

In 1936, Leslie insisted that Humphrey Bogart, his co-star in The Petrified Forest, be allowed to recreate the role on the screen. Howard’s final Broadway appearance, in Hamlet, was overshadowed by a rival production starring John Gielgud. He acted in some important British films, including the 1934 adaptation of W. Somerset Maugham’s novel, Of Human Bondage, co-starring Bette Davis; and as Professor Henry Higgins in the 1938 version of George Bernard Shaw’s Pygmalion. In 1939, Leslie starred opposite Ingrid Bergman in her Hollywood debut, Intermezzo; and also played his most famous role, as Ashley Wilkes in Gone With the Wind. 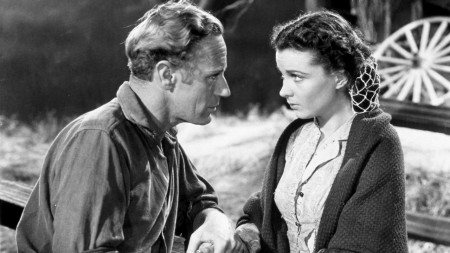 As World War II broke out, Howard returned to England. He wrote, produced, directed and starred in a number of morale-boosting films, including the 1940 documentary short, Common Heritage; and the war-themed Pimpernel Smith (1941), The First of the Few (1942), and The Gentler Sex (1943.) He also contributed to Powell and Pressburger’s 49th Parallel (1941) and Noel Coward’s In Which We Serve (1942.)

Leslie Howard died, aged fifty, on June 1, 1943, while flying home from Portugal. The aircraft was shot down by a Luftwaffe over the Bay of Biscay, killing seventeen people. No bodies were recovered, but a monument to the victims was later built in Spain, close to where the tragedy occurred.