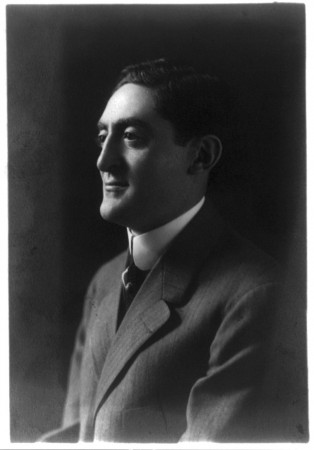 Samuel Henry Harris was born in New York City on February 3, 1872. His early jobs ranged from selling cough drops to keeping the Irish storyteller and vaudevillian, John W. Kelly, out of saloon bars during a troubled stint at Miner’s Bowery Theatre. He also worked as a boxing promoter, managing prize-fighter Terry McGovern. By the age of twenty-two, Harris owned six racehorses.

In 1904, he went into partnership with the multi-talented showman, George M. Cohan. Beginning with Little Johnny Jones, they produced a string of popular Broadway musicals at the Candler Theatre, renamed the Cohan and Harris Theatre in 1916.

In 1919, the Actors Equity Association joined the American Federation of Labour in calling for a strike, demanding recognition as a labour union. By mid-August, twenty-one New York theatres had closed their doors. The strike was settled in September, with the managers signing a five-year contract recognising Equity, and promising improved conditions.

The end of the strike also marked a split between Cohan and Harris, who had taken the actors’ side. Harris was known for fairness to actors and writers amid the generally harsh treatment prevailing in the industry. He kept the theatre, renamed again after himself, and forged another powerful alliance with songwriter Irving Berlin. Their first revue opened at the newly-built Music Box Theatre in 1921.

That August, Billboard announced that Jeanne Eagels was to star in a new Sam Harris production. This did not materialise, however, and it would take Harris almost a year to find a suitable property for her.

On May 26, 1922, Harris announced that she would star in A Gentleman’s Mother, a play by Martin Brown. Jeanne was cast as Polly Pearl, owner of a coastal tavern, who as a young woman had been trapped in a loveless marriage, and forced to give up her baby son. But their paths will cross again years later when he is one of two soldiers who arrive at the tavern.

Rehearsals began on June 12, and A Gentleman’s Mother premiered a fortnight later at the Apollo Theatre in Atlantic City. Billboard’s critic implied that Jeanne had worked wonders with inferior material. After Atlantic City, Mother moved to Connecticut, inaugurating the Stamford Theatre’s ninth season on July 9. A large contingency of Manhattan playgoers travelled up especially for the opening; however, the ill-fated production would fold before reaching New York.

“During my search, Sam Harris asked to see me, and after the hearing the names of the actresses I had considered, told me that he had Miss Jeanne Eagels under contract,” Williams told the New York Evening Telegram in 1923. “The end of my search was obvious—Mr. Harris could contribute the actress, and I the play. In abidance with a cable arrangement with Maugham, I did have to stipulate that I should cast the play, choose my own scenic artist, and determined in every detail the treatment of the text. This I did down to the smallest detail. Carte blanche was given me by Mr. Harris, and his able staff was of great assistance.”

While Harris did indeed procure Jeanne, she had not been the first or even second choice for the role. Marjorie Rambeau, a leading lady on Broadway and in silent films, had already rejected it. “Maybe it was better that things turned out as they did,” she reflected later. “I doubt if my performance as Sadie Thompson could have touched that of the magnificent Jeanne Eagels.”

Jeanne Eagels and the cast of ‘Rain’

Rain opened at the Maxine Elliott Theatre in November. “‘I always did believe that audiences made stars!’ stated Sam Harris,” Billboard reported, “as he gave instructions for all electric signs, billing and advertising be changed, giving Eagels the full honours of stardom with her name above and before the title in all capital letters.”

Harris even named one of his horses Sadie Thompson, after Rain’s heroine. After more than 300 performances, he grudgingly allowed Jeanne a brief respite. On August 30, 1923, Variety noted Jeanne’s original request of three full weeks, and the counter-offer of no shows on Saturday, giving her, and the rest of Rain’s cast, a full weekend off. Ultimately, though, Jeanne made Harris pay. When she resumed her two Saturday performances, she would be paid $1,000 weekly, increasing her wage by $400; and she would also receive a percentage of the gross.

Another scene from ‘Rain’

Following an extended Broadway run and a nationwide tour, Rain finally closed in November 1926. Having repeatedly expressed her desire to escape typecasting, it seems strange that Jeanne would have even considered playing Roxie Hart in Chicago. On November 30, newspapers reported that she was currently in rehearsal with Sam Forrest, her director from Rain. The play was scheduled to open in Washington DC the following week. By then, however, Forrest had left the project and George Abbott took his place.

On December 12, Jeanne withdrew from the project. It later emerged that she was dissatisfied with the original cast, and had every one of them replaced. She then attempted to do the same thing with the second cast. Harris ended up talking her out of the role and replaced her with Francine Larrimore.

“On the night of the opening, Eagels was in an aisle seat on the second row, attired in a striking white coat,” George Brinton Best wrote in the Boston Post. “When Miss Larrimore made her first entrance, Miss Eagels arose, sniffed, and strode up the aisle and out into the theatre lobby. There she upbraided Mr. Harris for half an hour and then went home.” 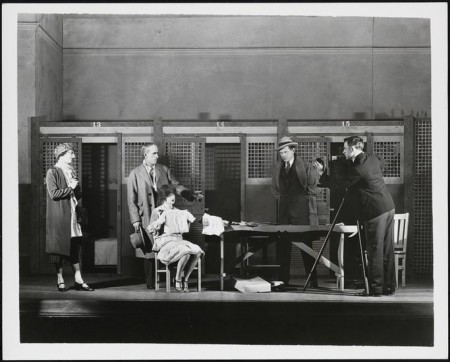 The cast of ‘Chicago’

In late 1927, Jeanne spent over two hours in Harris’s office, finally agreeing to reconcile for a new show. While Chicago was another smash hit for Harris, Eagels had conquered Hollywood, and was now touring in Her Cardboard Lover. But in March 1928, she would be fired after a week’s absence from the stage, and a bitter dispute with Equity resulted in an eighteen-month ban from the legitimate theatre.

“I think the order is very drastic,” Harris said in Jeanne’s defence. “Eighteen months is a long time. I have a contract with Miss Eagels which starts eleven months before the suspension is ended and I expect to work with her under that contract. It is a question of law isn’t it?”

By September 1929, when the ban lapsed, Jeanne was under contract to Paramount Pictures, and was planning a Broadway comeback with Harris. But her delicate health was failing, and on October 3rd, she died.

“Miss Eagels was the greatest actress in America,” Harris told reporters. “She had versatility and that’s something our other stars do not have. During all the time she worked for me I never knew her to give anything other than a fine performance. When the curtain rose she was one thousand percent. Two weeks before she died she was right here in this office and said to me: ‘Don’t ever worry about me, Sam Harris. I’ll never do anything to hurt you.’ Her death robs me of a friend and the American theatre of one of its most brilliant performers.”

In the late 1920s, Harris brought the Marx Brothers from vaudeville to Broadway in Cocoanuts and Animal Crackers. As the Great Depression took hold, ticket sales dipped. Harris’ 1935 revival of Rain, starring Tallulah Bankhead, flopped. But he also enjoyed success with Dinner at Eight (1932), Stage Door (1936) and The Man Who Came to Dinner (1939), all penned by his favourite dramatist, George S. Kaufman; and the original 1937 production of John Steinbeck’s Of Mice and Men.

“Everyone in the theatre adored him,” playwright Moss Hart wrote of Harris, describing him as “the most tranquil human being I have ever known … a great gentleman of the theatre and, so far as I am concerned, its last aristocrat.” His final show, Lady in the Dark, starred Gertrude Lawrence, with music by Kurt Weill and Ira Gershwin.

Sam H. Harris died of pneumonia on July 9, 1941, and is buried at Woodlawn Cemetery in the Bronx, alongside his former business partner, George M. Cohan.