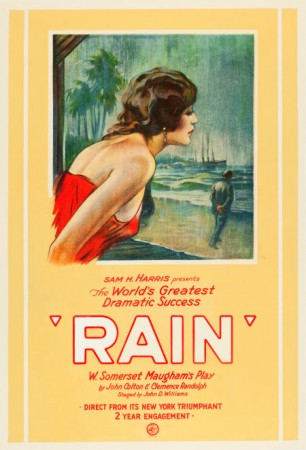 John Colton was born in Minneapolis on December 31, 1887. He spent his first fourteen years in Japan, where his English father was a diplomat. This early experience of colonial life in the Far East would inspire his writing.
After returning to the US, Colton became a drama critic for the Minneapolis Daily News in 1911.

In 1916, Colton moved to New York to write for Every Week magazine. Shortly afterwards, he was called to serve with the National Guard during the ‘Punitive Expedition’, and spent nine months on the Mexican border under General Pershing’s command. When America entered World War I in 1917, Colton’s poor eyesight disqualified him from active service.

By 1919, Colton was writing plots for motion pictures, starting with two shorts: The She Wolf and The Girl of Hell’s Agony, both Westerns, starring nightclub hostess Texas Guinan. In All Dolled Up (1921), Gladys Walton played a flapper who comes to the aid of Florence Turner, the ‘Vitagraph Girl.’

Colton’s first Broadway play, Drifting, was co-written with D.H. Andrews. Produced by W.A. Brady, it ran for sixty-three performances at the Playhouse Theatre in early 1922, starring Brady’s daughter, Alice as an American girl smuggling opium in China, with a supporting cast including Robert Warwick and a young Humphrey Bogart in his own Broadway debut. Drifting was filmed at Universal in 1923, with Priscilla Dean in the lead, alongside Wallace Beery and Anna May Wong. In 1929, it was remade with Mary Nolan as The Girl From China.

‘Miss Thompson’, W. Somerset Maugham’s short story about an American prostitute cast adrift on a storm-tossed South Sea island, caused a sensation when it was published in Smart Set magazine in 1921. Colton told the Brooklyn Daily Eagle in October 1926 that he had been staying at the same hotel as Maugham, and asked if he had anything for Colton to read. Maugham handed him the galleys of “Miss Thompson,” sent for proofing by Smart Set. The next morning, Colton asked if Maugham had considered turning his story into a play. As Maugham confirmed to Ward Morehouse in 1965, “I didn’t see a play in the story at all, but (John) Colton did. I told him go ahead with it if he so desired.”

H.L. Mencken, co-publisher of Smart Set, has claimed that the first draft of Rain was written by Clemence Randolph, daughter of the painter, ‘Sheriff Bob’ Chanler, with Colton – described by Mencken as a mere “Broadway jobber” – applying the finishing touches. However, producer John D. Williams’ recollection differed slightly from Mencken’s. “When Colton [not Randolph] had written half of the first act—on yellow sheets in lead pencil—he showed it to me, and it was then I contracted to buy the play,” he told the New York Evening Telegram in 1923. “As written by Mr. Colton and Miss Randolph, the magical touch of these two young dramatists had quickened Mr. Maugham’s plot and characters into a vivid and dramatic stage representation.”

As Colton admitted to the Los Angeles Times in 1926, “The New York producers were afraid of Rain. It was a departure and the box office angle could not be overlooked. One day Jeanne Eagels, under contract to [Sam] Harris, unearthed the manuscript from a pile on the producer’s desk. She read the play and announced that Rain was to be her next vehicle. Harris laughed, other producers told her to stick to her own type—the ingénue of the moment. It had been planned that a sort of Peg o’ My Heart affair should be her next vehicle.”

“The play was shabby from travel,” Eagels agreed, in a 1927 interview for Collier’s magazine. “Every office boy in every producing house had tossed it about. Nobody seemed to want it.” But Jeanne did, of course. “The instant Sadie Thompson appeared in my reading of Rain I recognized her. Dinner-time came and went. I sat in my room, held by the script until the very last word. The next day I hurled myself into Sam Harris’ office and demanded the play. Sadie Thompson was mine. I’d lived her in my dreams a thousand times. She was real, somebody I knew. Somebody I could be.”

In Colton and Randolph’s Rain, Sadie never admits to being a prostitute, despite the accusations of a fanatical preacher. Miss Thompson is provided with a bona fide love interest in a U.S. soldier stationed on the island. Perhaps the dramatists felt that a romance with a fellow American would make Sadie more palatable to audiences than a string of liaisons with island natives.

A week before Rain was due to open at Philadelphia’s Garrick Theatre, the theatrical section of the Evening Public Ledger contained a very small advertisement touting the premiere of Sam Harris’ latest production. On October 7, 1922, a much larger ad was published that gave the play’s title and Eagels’ name equal prominence. Critics were initially unexcited by the production, dismissing it as merely “novel” and complaining about the monotony of the rain that fell throughout the play.

“Rain was put on after the usual hectic period when author and star are pitted against those determined to change everything—even the title,” John Colton said in 1926. “They wanted to call it ‘Red Light Sadie’ and when I heard that, I went out and got drunk for three days. Who wouldn’t? And they wanted to put in a bedroom scene. But Miss Eagels believed in the play as it was written, and wouldn’t permit any changes.”

According to producer John D. Williams, however, changes were made at Eagels’ behest. “In story conferences she was never a mere listener,” Williams told the New York Evening Telegram in 1923. “A good example is the second act of Rain. As it was written originally, after her great conflict with the missionary, Davidson, he said to her, ‘All right, Sadie Thompson, you are doomed.’ And that was the curtain. It was a negative, but it seemed pretty effective to me. Jeanne wasn’t satisfied. We had to worry about it a long time. Then we wrote in her scene where she throws back the challenge to him with her ‘All right, Reverend Davidson.’ It was one of the most effective scenes in the play, and it made a tremendous curtain for the act. It was her keen sense of theatre which told her that our original lines were not as good as they could be written.” 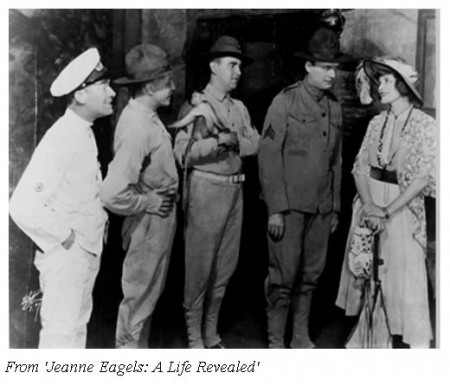 The cast of ‘Rain’

Rain opened on November 7 at the 900-seat Maxine Elliott Theatre on West 39th Street. “Another flawless performance . . . is that of Jeanne Eagels in Rain, the merciless tragedy that John Colton and Clemence Randolph have made of Somerset Maugham’s masterly story, ‘Miss Thompson’,” Dorothy Parker wrote in a review for Ainslee’s Magazine. “Rain is, in short, a fine play, though if you go to the theatre to get all cheered up, it is only fair to mention that it is a cruel and bitter one. But you should see it, if you never see anything else.”

After 608 performances, Rain closed in mid-1924, and was revived later that year. Eagels then embarked on a nationwide tour, before bringing Rain back to New York in late 1926. “Camille is what they called ‘actor-proof’ until they saw Bernhardt,” John Colton wrote to Jeanne. “And Rain, to my sorrow and frustration, seems only to be able to tickle the ears of the groundlings unless you play it. It’s too bad. You made it too great. It can be no one else’s.”

In 1923, Colton adapted The Exciters, a play by Martin Brown that had once been offered to Jeanne, for the big screen. His next great success came in 1926, when The Shanghai Gesture opened on Broadway. Colton’s play told the story of an American girl lured into a life of vice in Shanghai.

In 1929, Sam Harris was hoping to cast Jeanne Eagels in another Colton play, The Sainted Wench, about a promiscuous woman married to a pious student. However, Jeanne died on October 3rd. Colton moved to Hollywood, where he regaled friends like Irving Thalberg and John Gilbert with tales of the homosexual subculture he knew intimately, and shared his home with lesbian writer Mercedes de Acosta, who was infatuated with Greta Garbo. 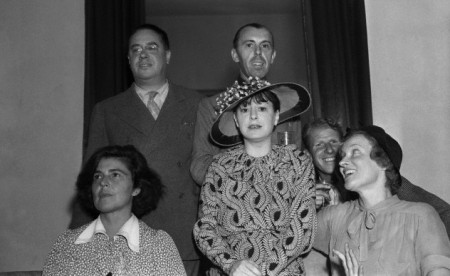 Rain returned to the big screen in 1932, with Joan Crawford; and was revived on Broadway with Tallulah Bankhead in 1935. A stage musical, Sadie Thompson, was produced in 1945, while Rita Hayworth played Sadie in a 1953 movie. Diane Cilento and Carroll Baker would play the role in subsequent television adaptations, but no actress could match Eagels’ impact.

In 1935, Colton wrote two horror films for Universal; Werewolf of London, and The Invisible Ray. In 1941, The Shanghai Gesture was filmed by Josef Von Sternberg. Although hampered by censorship, it is considered an early classic of film noir. Another Colton play, Under Capricorn, would be filmed by Alfred Hitchcock in 1949.

On August 14th, 1945, John Colton had his first stroke. He spent the next year in Gainsville, Texas, recuperating and working on a new play. On December 26, 1946, Colton suffered a second stroke and died, aged fifty-eight, with his long-term friend, actress Madame Barry-Orlova, at his bedside.