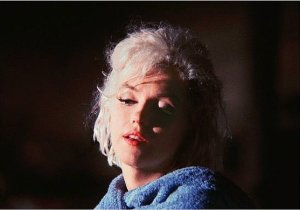 Lawrence Schiller was one of only three photographers granted access to the shooting of the much-vaunted ‘pool scene’ in Marilyn Monroe’s final, incomplete movie, Something’s Got to Give. Fifty years later, he has collected his pictures – including some never seen before – with a personal commentary, in a new, deluxe book, published by Taschen. END_OF_DOCUMENT_TOKEN_TO_BE_REPLACED

Photographer and artist Mary Ann Lynch, who has been capturing offbeat Marilyn sightings worldwide since 1992, attended the recent launch of Larry Schiller’s Marilyn & Me : A Memoir in Words and Photographs, at New York’s Steven Kasher Gallery.

Here are some of Mary Ann’s exclusive images, with personal commentary, taken during the event.

We can also look forward to hearing more from Mary Ann Lynch, who promises: “There’ll be more to come on Lawrence Schiller and his career extraordinaire, epitomized by his tribute to Marilyn, the story of their unexpected, unlikely professional relationship during her last two tumultuous years. It was a relationship that would change both their lives at the time…and his forever.”

Photographs from Lawrence Schiller’s “Marilyn & Me”

Schiller’s extraordinary color poolside photograph of Marilyn in June 1962, on the set of “Something’s Got To Give,” her last and unfinished movie. Marilyn died August 5, 1962. In 2011 Schiller decided to undertake this ambitious project, a memoir in words and photographs, to appear during the 50th anniversary of her passing. He succeeded with class and gusto, bringing out two separate versions of the memoir and mounting a photographic exhibition moving about Europe and the United States.  END_OF_DOCUMENT_TOKEN_TO_BE_REPLACED