Donald Zec, the British journalist who covered show-business for the Daily Mirror over four decades, has died at the grand old age of 102.

He was born Donald Zecanovsky in London in 1919, one of eleven children. His parents were Jewish immigrants from Odessa in Ukraine, and his father, a tailor whose garments were sold at Harrods department store, shortened the family name to Zec.

Donald left school at 14, and was later hired as a messenger boy for the Evening Standard. He contributed to the ‘Londoner’s Diary’ column, but was still not a bona fide reporter.

In 1938, he was given a three-day trial at the Daily Mirror, “at the end of which no decision was forthcoming, [and] I stayed for forty years”. However, as War World II broke out in 1939, he was called up to the London Irish Rifles. He married childhood sweetheart Frances Krivine in 1940, and they had a son, Paul.

Donald returned to the Mirror when the war ended, and only brother, Philip Zec, joined him there as a political cartoonist. In 1952, Donald was appointed the newspaper’s film writer. He first saw, and was highly impressed by Marilyn Monroe in the torrid Niagara (1953.) “There was a boldness to her sexuality yet an innocence too,” he wrote. “She was a highly tactile female and the most fleeting physical contact, like a simple hand squeeze, was high on the generating current of intimacy.”

He extolled his interviewees as “the greatest array of Hollywood stars ever, which has never been replicated. In one week, I would see Gary Cooper, Spencer Tracy, Marilyn Monroe, Marlon Brando and Humphrey Bogart, the thoroughbreds of Hollywood at the time.” But for Donald, Marilyn was “the most intriguing star of all.”

In March 1956, Donald joined her on a flight from Los Angeles to Phoenix, Arizona, where she was to film the rodeo scenes for Bus Stop (see here.) “Being strapped beside her in a Constellation was no hardship,” he recalled. “When a tray of food was put before her she rejected it saying: ‘I have to watch my figure.’ My response – ‘You eat, Marilyn, I’ll watch your figure’ – induced a playful slap on my arm.” When one of the engines caught fire, he was contemplating how he might file his scoop if the aircraft managed to land safely. Eventually she scribbled a note for him: ‘Here lies Marilyn Monroe, 38-23-36.’ 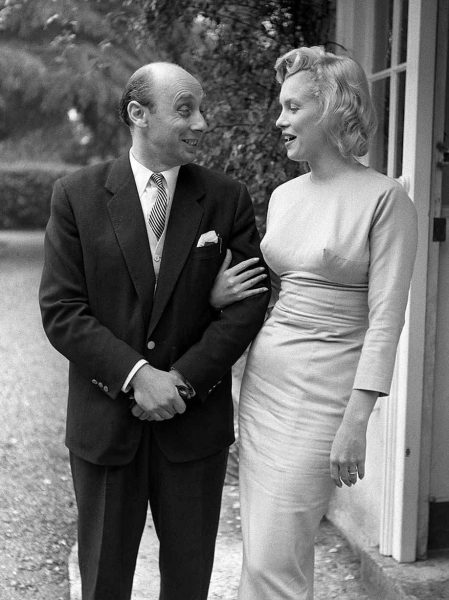 Donald would meet Marilyn again in July, as she arrived in England to film The Prince and the Showgirl. They were pictured laughing together during a press conference at Parkside House in Egham, Surrey, where Marilyn would stay throughout the four-month shoot. While some members of the British press found her standoffish, Zec remained a vocal supporter.

In The Prince, the Showgirl and Me, a book based on diary entries at the time – later filmed as My Week With Marilyn – author Colin Clark (formerly an assistant director) called Donald a “little creep” who jumped at Marilyn from behind the bushes, and then sneaked into the house and wrapped his arms around her waist. “Zec was telling everyone who would listen that Marilyn was a personal friend of his,” Clark wrote.

But in 1997 the Sunday Times was forced to retract its review of Clark’s book: “The review also said that Miss Monroe and Mr Zec were ‘total strangers’. We now accept that this was wholly untrue.” In its first print run, the paperback edition included a slip of paper noting this factual ‘error.’ Ironically, Clark’s own version of events – including his wild claim of a week-long dalliance with Marilyn – is now considered somewhat unreliable. 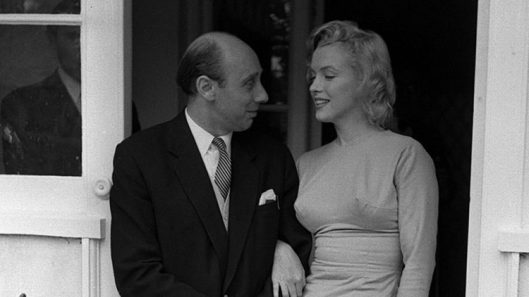 In his own account of Marilyn’s arrival, Donald wrote here, “She laughed. She clung to my arm … I said she looked fine, with a sideways glance at her dress. ‘Fits a bit tight,’ I commented. ‘It fits,’ she laughed.” She then introduced him to her new husband, playwright Arthur Miller, who said she was “the most unique person I have ever met.” Marilyn then added, “All I can say is I’ve never been happier in my life.”

During another press call at London’s Savoy Hotel, another reporter asked Marilyn what it was like being married to such a quiet man. “Miller’s eyes narrowed in a cold smile,” Donald recalled. “‘I’m not so quiet as all that,’ he said. Miller stood up. Marilyn went over to him, looked up into his eyes. Then she turned her blue eyes on the crowd, parted her pink lips in a low husky ‘Thank you.'”

Donald would later share with his niece, Patricia Kershaw, an amusing anecdote that the actress had told him. “She said that while she was dating Arthur Miller they called in at his parents house and she needed to go to the loo. She was so embarrassed in case they heard her peeing she turned the taps full on. Arthur’s dad turned to his son and said, ‘that friend of yours pees like a horse’!”

After returning to the U.S., an anxious Marilyn would call Donald at his London home at 3:30 am, announcing herself as ‘Marilyn Monroe Miller’.” Awoken from sleep, he admitted to a “rapid readjustment of reflexes. ‘Of course you haven’t disturbed me!’ seemed a minor deceit.” They were last photographed together in Los Angeles in 1960, on the set of her penultimate movie, Let’s Make Love.

“The more insecure she became, the more the ghost of her mother intruded and made her doubt her own sanity,” Donald reflected. “As Arthur Miller wrote, ‘Beneath her insouciance and wit, death was her companion everywhere.’ Her single resource, other than her talent, was her sexuality. Hers was the most delicious arrangement of living flesh on the planet.” In 2012, on the 50th anniversary of her death, Donald wrote in the Mirror, “The truly great design their own immortality. Marilyn achieved hers with a spirit-lifting style, sealed with a luscious kiss on the cheek of eternity.” 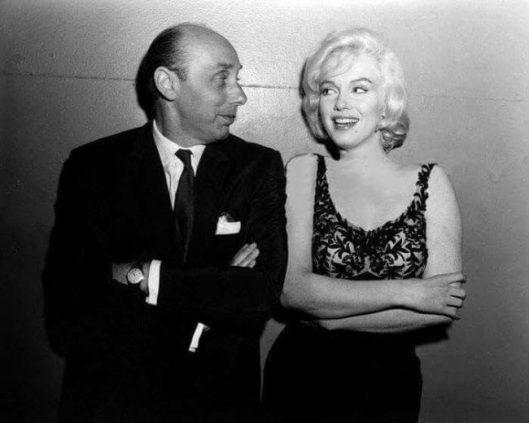 As a new generation of rock stars replaced Hollywood scions in the vanguard of modern celebrity, Donald was one of the first reporters to profile The Beatles. After suffering a heart attack in 1972, he retired from the Mirror, and would follow up his first book, This Show Business (1959), with two further memoirs, Some Enchanted Egos (1972), and Put the Knife in Gently (2003); plus biographies of Sophia Loren, Lee Marvin, Elizabeth Taylor, Barbara Streisand, the Queen Mother, and his brother Philip Zec. Donald was also ghostwriter for the Bond movie producer Albert ‘Cubby’ Broccoli’s autobiography, and even turned his hand to fiction, with novels drawn from his wartime experiences and long career in the entertainment industry.

In 1989, he returned to the Mirror to write an obituary for Sir Laurence Olivier, with whom Marilyn had once sparred on – and off – the set in The Prince and the Showgirl. A gifted violinist, Donald took piano lessons in later life to send ‘musical love letters to Frances.’ After her death in 2006, Donald took up painting and became an accomplished artist.

“If you didn’t know how he’d earned his living you’d guess teaching philosophy at Oxford, not making Marilyn laugh in Beverly Hills,” fellow writer Howard Jacobson said after Donald’s 100th birthday party in 2019 (see here.) “I can’t decide which I covet most, the age he has reached while still accumulating accomplishments, or the fact that Marilyn Monroe rang him in his bed.” Journalist Roy Greenslade, meanwhile, tweeted his praise for “the wittiest show-business writer in Britain.”

On September 6, 2021, Donald’s nephew Rob Cowan (a radio presenter for Classic FM) announced that he had “died in the early hours of this morning, 1:45 to be exact, having asked for ice cream some 2:45 hours earlier. Only Donald! No-one could have wished for a more loving or supportive uncle.”

“He was an incredible man who had a great zest for life,” said Donald’s son Paul, now 81. “Within minutes of meeting people he’d have them laughing. He was wonderful, bright and funny right up to the end. Dad was young in spirit and annoyed about his old age. But even in his 90s, he made those around him feel young.”

Author Michelle Morgan posted a tribute on Instagram: “Good night and thank you, dear Donald Zec,” she wrote. “Mr. Zec was one of Marilyn’s greatest champions and interviewed her many times. He is mentioned a lot in When Marilyn Met the Queen and I’ve read all of his articles about her, and corresponded with him several times over the years. What an inspiration he was. What a legend. I’m so sad that he won’t be able to see my book. I like to think that he and Marilyn are exchanging some witty banter in heaven as we speak.”

With thanks to The Mirror, The Telegraph, The Times, The Guardian, and A Passion for Marilyn