On June 1st – exactly ninety-two years after Norma Jeane Mortenson was born in the charity ward of Los Angeles General Hospital – her 1954 movie, There’s No Business Like Show Business, was screened at the Duke of York’s Cinema in Brighton, and will be shown at selected Picturehouse venues throughout June. The first musical made in CinemaScope (a pioneering widescreen technology developed by Twentieth Century Fox to combat the threat of television), it was also one of the last Technicolour musicals made under the studio system model of Hollywood’s golden age.

A tribute to the great songwriter Irving Berlin, There’s No Business Like Show Business builds a loose plot around his music, largely favouring showtunes over his more intimate numbers. Using a fictional troupe, ‘The Five Donahues’, writers Lamar Trotti and Henry and Phoebe Ephron sketch a vague history of American popular song, from Vaudeville to Broadway. Historic events from the Roaring Twenties and Great Depression to World War II are mentioned in passing. By the time women have ditched their long skirts, however, period detail is mostly forgotten, as costumer Travilla follows his muse down a path of glorious fantasy.

Ray, in a rare film role as eldest son Steve, was a hugely successful singer and pre-Elvis teen idol. In retrospect, the story arc in which he gives up show business for the priesthood reads almost like code for Ray’s homosexuality, a closely guarded secret at the time. As Katy, Mitzi Gaynor resembles a younger, prettier version of Merman, and the pair became close friends. Donald O’Connor, cast as lovable rogue Tim, had recently starred opposite Gene Kelly in Singin’ in the Rain. Hollywood veteran Walter Lang, who had been directing films since 1926, was placed at the helm.

In early 1954, Marilyn Monroe was Fox’s biggest star but had been suspended after turning down another musical, The Girl In Pink Tights. During her absence, she married her long-time boyfriend, baseball star Joe DiMaggio, and entertained US troops in Korea. On her return to Los Angeles, she collected a Photoplay award as ‘Most Popular Actress of 1953’, and came to terms with Fox, accepting a part in There’s No Business Like Show Business on condition that the film she really wanted to make – The Seven Year Itch – would be produced at her home studio. 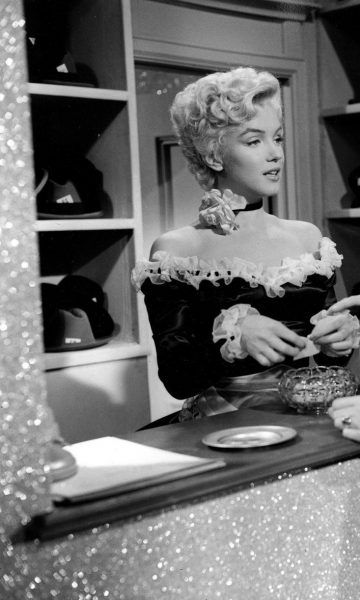 In her first scene as Vicky Parker, she is working as a hat-check girl in a nightclub. Dressed in a skimpy maid’s outfit, Vicky converses with her down-at-heel manager (Frank McHugh) in a rather affected accent, informing him that she wishes to be known as Victoria Hoffman, and will be performing a scene from Chekhov’s The Cherry Orchard at her next audition. Although comical, one can’t help but feel that joke is on Marilyn, with the studio slyly mocking her own aspirations.

All those lofty ideas are forgotten when Vicky is asked to replace that evening’s act. ‘After You Get What You Want (You Don’t Want It)’ a No 2 hit for Van & Schenck in 1920, was more recently revived by Kathy Brier in the Twenties-set TV series, Boardwalk Empire. In Monroe’s version (now considered definitive), this jaunty tune becomes slow and sensuous. Although taking the role had been a compromise, she exerted control over her musical numbers, working with her own choreographer (Jack Cole) and musical arranger (Hal Schaefer.)

Her gown is cut almost to the hip, with a ‘nude’ lining and white crystal beading. Travilla’s dress, which was sold for $83,200 at Julien’s Auctions in 2016, seems to anticipate the even more risqué Jean Louis gown that Monroe would wear while singing ‘Happy Birthday’ to President Kennedy in 1962. Befitting a nightclub performance, her raunchy routine owes more to burlesque than Cole’s elegant choreography for ‘Diamonds Are a Girl’s Best Friend’, her signature number from Gentlemen Prefer Blondes (1953.)

In her 2012 essay, ‘A Rumbling of Things Unknown’, cultural critic Jacqueline Rose praises Marilyn’s “brilliant” rendition, “where, to an audience of gawking, mainly male spectators, she lays out the illusion of desire: ‘After you get what you want you don’t want it.’ You have to watch it … to see how her performance pushes the message of Irving Berlin’s song right over the top.”

That night, Vicky catches the eye of producer Lew Harris (Richard Eastham), and when we next see her, she is on the brink of stardom. First performed by Ethel Waters on Broadway, ‘Heat Wave’ made its screen debut in Alexander’s Ragtime Band (1938), starring Ethel Merman. As Molly, Merman hopes to reprise the number in Show Business, until Vicky persuades Tim (O’Connor) to let her perform it instead.

Travilla’s ‘Heat Wave’ costume surpasses itself in extravagance, with a black beaded scarf barely covering Monroe’s bust, precariously held up by a pink chiffon scarf. A voluminous, open skirt reveals matching black briefs, and Travilla was obliged to add a slither of fabric to cover Marilyn’s belly button. Her hair is pulled back in a black scarf and topped with a giant hat, covered in silk flowers. Actress Susan Strasberg, visiting the set, described her appearance as “larger than life, an all-American blond Chiquita banana commercial, only beautiful.”

Others were not so enamoured with the design, including Joe DiMaggio, who allegedly refused to be photographed with his wife. Only a few months later, another racy film scene (from The Seven Year Itch) would lead the couple to the divorce court. In retrospect, ‘After You Get What You Want (You Don’t Want It)’ sounds like an ironic commentary on their ill-fated marriage.

This prudish reaction to Monroe’s screen persona was shared by some critics, with the New York Times judging her ‘Heat Wave’ number “embarrassing to behold,” while Ed Sullivan proclaimed it “one of the most flagrant violations of good taste” he had ever seen. Two years later, Elvis Presley would provoke outrage on national television with his hip-thrusting routine, making ‘Heat Wave’ seem tame by comparison. Seen today, it is only mildly risqué, and what elevates it above pure hokum is the defiant smirk on Marilyn’s face. 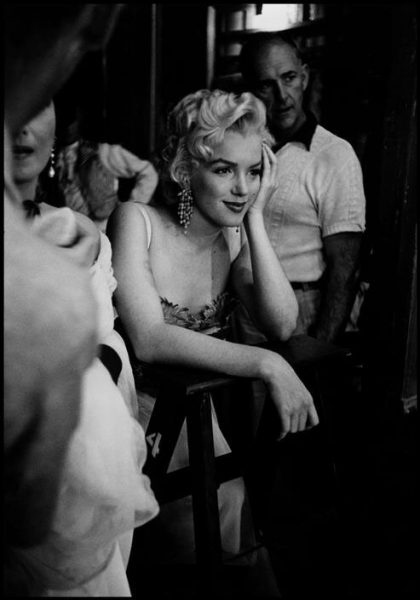 Molly Donahue henceforth describes her as “that girl who steals everyone’s material,” and is nonplussed when she begins dating her son. While most of Monroe’s leading men were not conventionally handsome, she and O’Connor seem more like brother and sister. For most of their love song, ‘A Man Chases a Girl (Until She Catches Him)’, Marilyn is not even present, singing a few lines from the ether while O’Connor dances with a gaggle of nymphs.

When Vicky is offered her own show, Merman cattily predicts it will comprise of “something borrowed, and something blue.” Nonetheless, the younger Donahues appear in Vicky’s next big number, ‘Lazy’, doing most of the hard work while she croons another Berlin tune. A hit for Blossom Seeley in 1924, it is transformed into one of Monroe’s loveliest recordings, and its languorous aesthetic suits her perfectly. While her footwork isn’t on a par with her co-stars, she is hypnotically graceful in high heels and tight black capris, given a splash of colour with a green sash tied around her waist.

In a reflection of Marilyn’s offscreen marital woes, Vicky’s dedication to her career drives a wedge between her and Tim, who drowns his sorrows before disappearing altogether. In one of the film’s genuinely moving scenes, a fur coat-clad Vicky shelters from the rain in a shop doorway and is crushed when Molly snubs her offer to share a taxi. This gives us a fleeting glimpse of Marilyn’s dramatic talents, which are otherwise under-used.

While Terrance searches for Tim, the women share a dressing room, and Katy finally brings Vicky and Molly together – although not before Mrs Donahue accuses the star of cheating on Tim with Harris. “Lew did everything for me. You know that,” Vicky protests. “Maybe he did have some ideas. That doesn’t mean that I shared them. There was never anyone for me but Tim.” This show of female unity was not reflected on the set, as the no-nonsense Merman found Monroe self-absorbed, while Marilyn felt excluded from Ethel and Mitzi’s banter. Nonetheless, the story proceeds towards a traditional happy ending, with Tim reappearing in sailor’s uniform as Merman sings the title song, and the family reuniting onstage (with Vicky joining them.)

Because Marilyn was already under contract to RCA, her songs did not appear on the cast soundtrack album but were released as a solo EP alongside another Berlin composition, ‘You’d Be Surprised’ (an abbreviated version had been performed by Dan Dailey onscreen.) Whatever the film’s shortcomings, Marilyn’s recordings showcase her vocal stylings at their peak. Donald O’Connor considered it his best screen role, while Mitzi Gaynor (the only surviving cast member) would recall that Monroe “wasn’t around all the time. She was busy creating Marilyn Monroe. If you see that picture now, though, and really pay attention to it, you realize that Marilyn steals the whole damn picture.”