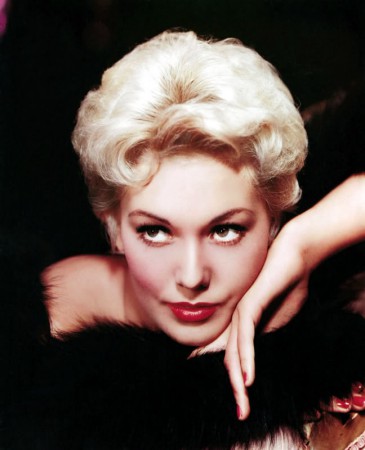 Marilyn Pauline Novak was born in Chicago on February 13, 1933. Her father was a history teacher who also worked as a railroad dispatcher, and her mother was employed in a factory. Both parents were of Czech descent, and had an elder daughter, Arlene.

After graduating from high school, Novak attended Wright Junior College, and won a scholarship to Chicago’s School of the Art Institute. She was also working as a model, and during the summer before her art studies were due to begin, Novak went on a cross-country tour promoting a refrigerator brand at trade shows.

After arriving in Los Angeles, she won a walk-on part in The French Line, a Jane Russell movie. According to biographer Peter Harry Brown, Novak was spotted on the set by Columbia’s Maxwell Arnow, and signed to a long-term contract. Hollywood already had its Marilyn, so she reluctantly changed her name.

Kim Novak was quickly built up as a successor to Columbia’s reigning glamour queen, Rita Hayworth. Her first great success was as a small-town beauty in Picnic (1955), Joshua Logan’s adaptation of a William Inge play, which earned her a Golden Globe award as Most Promising Newcomer. She then starred in Otto Preminger’s The Man With the Golden Arm, starring Frank Sinatra as a heroin-addicted musician. 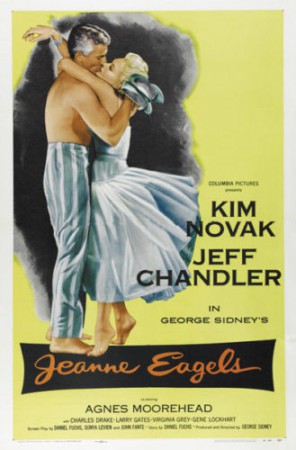 In June 1956, columnist Dorothy Kilgallen reported that Rita Hayworth would star in The Jeanne Eagels Story, an upcoming film about the stage actress, as part of a ‘kiss-and-make-up deal’ with Columbia. Hayworth had recreated Eagels’ most celebrated role in Miss Sadie Thompson. But in December, Louella Parsons reported that Novak, who had hoped to spend the holiday season with her family in Chicago, would “appear the day after Christmas to do her first scene in Jeanne Eagels. It will be a hot hoochy-koochy number in the briefest costume Kim ever wore.” 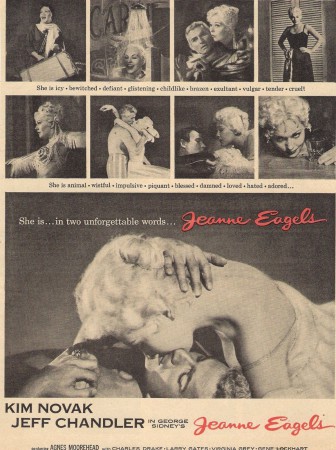 Kim bore a slight physical resemblance to Eagels, though her hair and make-up were more reminiscent of Jean Harlow. Costumer Jean Louis created a vast wardrobe for Novak, entailing forty-five costume changes. According to author Larry Kleno, Kim “devoted her full energies to the exacting task of presenting Jeanne. She read everything she could find on her, learning, for instance, that ‘Eagels was irrational and sensitive and all the things I sort of am, and she used to eat pickles at school like me’ … Her dressing room walls were covered with photos of the real Jeanne, and she employed an accordionist for several weeks to play ‘Poor Butterfly’ during the film’s sad scenes.”

The American Weekly covered the production in its July 28, 1957 issue. “Before each day’s shooting, Kim sat with her director, plump, placid, pipe-smoking George Sidney. He would tell her what kind of girl Jeanne Eagels was. He would take a pull on his briar and say: ‘You came up out of Kansas City. You’re a tough trouper. You’ve been in carnivals and in stock. You’ve done all the difficult things in show business. On the outside you’re a kind of callous kid. Underneath you’re easily hurt.’” 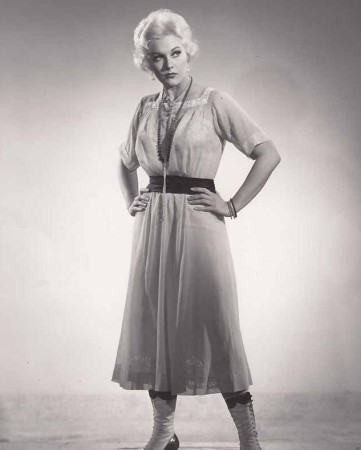 However, while Jeanne Eagels (1957) utilised the basic facts of the star’s life story, the end result was distorted beyond recognition. Based on Eddie Doherty’s controversial biography, The Rain Girl, it was intended to showcase Novak’s potential as a serious actress, but achieved the opposite. Released that August, Jeanne Eagels did irreparable damage to the memory of a Broadway legend, and proved a critical failure.

While some critics thought Kim woefully miscast, others praised her acting. The real problem was not her performance, but the lurid script and its melodramatic treatment. Relatives of Jeanne Eagels filed suit in the Los Angeles Superior Court, seeking damages of $950,000 from both George Sidney and Columbia for depicting Jeanne “as a dissolute and immoral person.” However, Columbia’s defense (that you can’t defame the dead) was upheld. 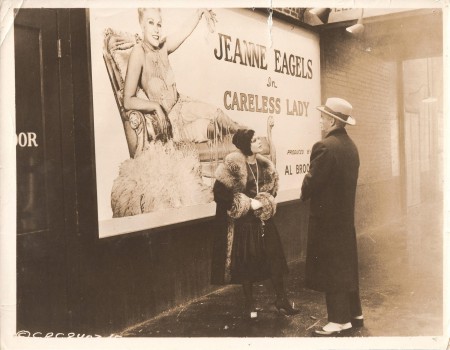 With Jeff Chandler as ‘Sal Satori’,a character based on producer Maurice Dubinsky

That year, Kim became romantically involved with black entertainer Sammy Davis Jr. After their romance was exposed in the press, Columbia boss Harry Cohn – fearful that a racist backlash would ruin the career of his biggest star – forced the couple to part.

Kim was reunited with Sinatra in the musical, Pal Joey, also starring Rita Hayworth. In 1958, Alfred Hitchcock cast Novak in a dual role, opposite James Stewart in Vertigo. Although poorly received initially, Vertigo’s reputation has soared. In 2012, Sight & Sound magazine’s critics named it the greatest film of all time, usurping Citizen Kane after fifty years in the top spot. Next, Kim starred as a modern-day witch in Bell, Book and Candle (1958); Middle of the Night (1959), based on Paddy Chayevsky’s play; and with Kirk Douglas in Strangers When Me Meet (1960.) 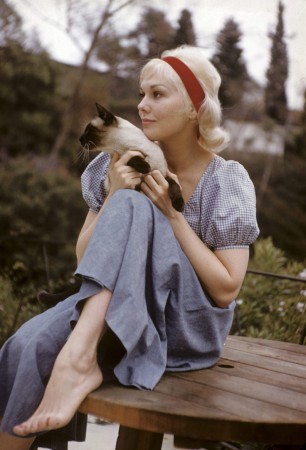 In 1960, Kim was engaged to director Richard Quine. The wedding was later called off, but they collaborated again on The Notorious Landlady (1962.) With her Columbia contract at an end, she was now a free agent. During filming, she bought a home by the sea in Big Sur, California, which became her lifelong refuge from Hollywood.

In 1964, Kim starred in a remake of W. Somerset Maugham’s Of Human Bondage. This was followed by Billy Wilder’s Kiss Me Stupid, which was condemned by the Legion of Decency, but has since been reappraised as a daring sex comedy. In 1965, she married British actor Richard Johnson, her co-star in The Amorous Adventures of Moll Flanders. They divorced less than a year later.

After her Bel Air home was lost in a mudslide, Kim decided to leave Hollywood behind. From then on, she lived full-time in Big Sur, returning to her first love – painting – and writing poetry and lyrics for folk songs, recorded by Harry Belafonte and others. She continued making films, such as Robert Aldrich’s The Legend of Lylah Clare (1968), but after attending the premiere, was devastated to learn that her lines had been dubbed. During the 1970s she worked in both film and television. In 1976 she married veterinarian Robert Malloy. 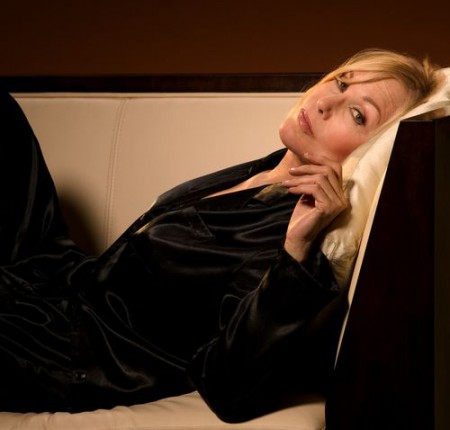 In Just a Gigolo (1979), Kim bridged the gap between old stardom and new, represented by co-stars Marlene Dietrich and David Bowie; and she was part of another all-star cast in The Mirror Crack’d (1980), based on an Agatha Christie mystery, alongside Elizabeth Taylor, Tony Curtis and Rock Hudson. In 1986, Kim played a recurring role in TV soap opera, Falcon Crest. While filming Liebestraum (1991) she clashed with director Mike Figgis, prompting her retirement from acting.

Six years later, a memoir in progress was destroyed during a fire at her home in Big Sur. Unlike many of Hollywood’s ‘love goddesses’, however, Kim Novak has thrived away from the spotlight, living quietly with her husband of forty years, raising horses, exhibiting her art, and making occasional appearances at film festivals.