Beatrice Colin lives in Glasgow, and is the author of one of my favourite novels in recent years: The Luminous Life of Lilly Aphrodite (2008), which tells the fantastic tale of how a young waif endures the hardships of World War I and later becomes a movie siren in the decadent milieu of 1920s Berlin.

When I read in The Mirror last Saturday that Dr Colin had written an episodic radio play about the notorious Barrow Gang’s crime spree during America’s Great Depression, I knew I had to listen in. Like many, I first became interested in the case after seeing the iconic (and inaccurate) 1967 movie, Bonnie and Clyde. More recently, I read Go Down Together (2009), historian Jeff Guinn’s compelling factual account of the couple and their misadventures.

Originally broadcast as a series of five short episodes, The True Story of Bonnie Parker can also be heard in a 75-minute omnibus version. As the title suggests, the story focuses primarily on Bonnie Parker, who was 19, separated from her jailbird husband and working as a waitress in Cement City, Dallas, in 1930, when she first met another young hoodlum, Clyde Barrow. In an early diary, she had expressed frustration with her life and a craving for glamour. 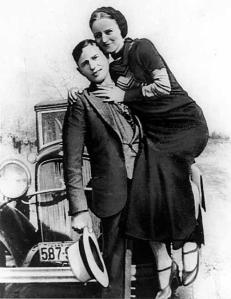 Bonnie is an appealing literary subject, as she was a sometime poet herself. Only a few of her compositions survive, however. The prophetic ‘Trail’s End’ is quoted at the beginning and end of this play. Though lesser-known, and not included in the play, ‘Suicide Sal’ – probably written during a stint in prison – shows that Bonnie was no stranger to the seamier side of life. In Colin’s play, Bonnie is given to quoting Shakespeare – and while this may be an embellishment, it reflects the drama of her life perfectly.

The play depicts Bonnie as a romantic, blind-sided by her love for trigger-happy Clyde. And in some ways she was an innocent. She never killed anyone, though she helped Clyde in other ways.  Far from the gleeful miscreants of legend, the Barrow Gang were never very successful. Compared to the other career criminals of the early 1930s – from John Dillinger to Al Capone – they were amateurs.

They were joined by Clyde’s brother, Buck, and his wife Blanche. With so much attention on the young lovers, the rest of the gang have been overlooked. But Blanche was the only member who survived. Her memoir, My Life With Bonnie and Clyde, was published in 2004, sixteen years after her death.

The early 1930s was a time of tremendous poverty, and for many who longed for a better life, Bonnie and Clyde’s storm of armed robberies didn’t seem like such a bad idea. Their rationalisation, ‘We rob banks, not people’, is still relevant almost a century later, in the aftermath of economic meltdown and a string of financial scandals.

Bonnie and Clyde’s popularity made them a target for the FBI. Photographs of the gang, left behind when they fled a hideout in Joplin, Missouri, showed Bonnie indulging in gunplay, and posing with a cigar in her mouth. Attractive as she was, these images shocked ordinary Americans, who thought her behaviour unfeminine.

Parker’s final months were painfully difficult, as she had badly burned her leg in a car accident, but refused to leave Clyde and go to hospital. After two years at large, the couple were captured and shot dead in their car in Louisiana by lawmen in 1934.

The True Story of Bonnie Parker is produced and directed by Gaynor Macfarlane, with Melody Grove and Fin Denn Hertog in the lead roles. It is well-acted, with a soundtrack of plaintive bluegrass and radio hits like ‘Smoke Gets in Your Eyes’. The play is not only a fine introduction to the fabled outlaws, but also a showcase for Colin’s lush prose, highlighted by her ghostly narrator’s descriptions of the rural American landscape.

The True Story of Bonnie Parker is available on BBC i-Player until Sunday, September 8th.