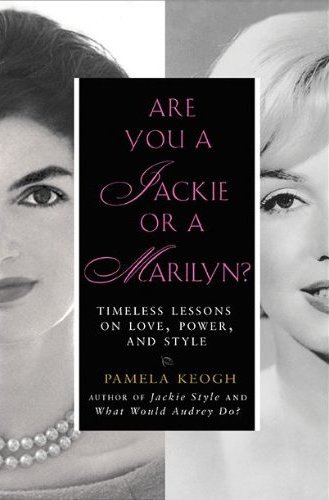 ‘Are you a Jackie or a Marilyn?’ is the question posed in ‘Maidenform’, Season 2, Episode 6 of AMC’s Mad Men. First broadcast in 2008, and set in 1961, the storyline concerns on a proposed advertising campaign for Playtex brassieres. On a drunken night out, the ad-men divide the female characters into two categories: ‘Jackies’ after America’s First Lady, Jacqueline Bouvier Kennedy (later Onassis); and ‘Marilyns’, after Marilyn Monroe.

This episode was the inspiration behind Pamela Keogh’s new book, Are You a Jackie or a Marilyn? Timeless Lessons on Love, Power and Style. Keogh has previously covered other icons of the past, including Elvis Presley and Audrey Hepburn. She has also written about Kennedy in Jackie Style (2001), but this is her first full-length work on Monroe.

Why, then, Jackie and Marilyn? Why not Audrey and Liz, or Grace and Doris? There are plenty of iconic ladies to choose from. However, Jackie and Marilyn do seem to represent polar opposites of mid-20th century womanhood. On the book cover, showing half of each woman’s face, they almost mirror each other: Marilyn representing light, and Jackie dark. (Or is it the other way around?)

Whereas Jackie and Grace were both debutantes; Marilyn and Liz were sex symbols; and Doris, like Monroe, was a gifted comedienne, it can be stated that MM and JKO came from different worlds. Jackie was a stockbroker’s daughter who married a future president; whereas Marilyn, like Cinderella, rose from rags to riches.

In uncertain times, nostalgia reassures. Are You a Jackie or a Marilyn? is a light, escapist read, focussing on enduring images of womanhood. Jackie and Marilyn were icons in an age before the internet and reality TV, and this gives them an air of mystery. This is a proudly girlie tome, written in a chatty, magazine column style, with a pink-black colour scheme and line drawings from Megan Hess (whose illustrations will be recognised by fans of Sex and the City author Candace Bushnell.)

At first glance, the Jackie/Marilyn formula is a classic good/bad girl dichotomy. And of course, the two women are indelibly linked, it would seem, by their relationships with John F. Kennedy. But Keogh does not consider Marilyn’s liaison with JFK to have been a long one, pointing out that very few of their alleged trysts can be confirmed.

Whatever the nature of their involvement, Jackie does not seem to have resented Marilyn – although her absence from the Madison Square gala of 1962, when Monroe charmed the president with a seductive ‘Happy Birthday’, was interpreted by some as a snub.

The book begins with a quiz (also published at Vanity Fair.) Each chapter covers a different aspect of the women: style, beauty, values, intellect.  I enjoyed the chapters which compared their preferences in fashion, diet, and fitness, and suggested what trends they might follow today. Also of interest were their reading lists.

Fans of Monroe will know that she was far from a ‘dumb blonde’ and that her love of learning was genuine, not affected. She became one of the first actresses to establish her own production company. Jackie founded the John F. Kennedy Memorial Library and worked as a journalist and editor.

Despite appearances, JKO and MM had quite a lot in common: they both faced tragedy in their lives; they both followed paths of self-improvement; and, of course, they both attracted strong, powerful men. And the differences between them are not exactly as one might expect: Jackie was hardly the uptight housewife of legend, but an accomplished flirt, while Marilyn, for all her brazen sex appeal, was a born romantic. Jackie, though financially shrewd, was a profligate shopper; whereas Marilyn was disinterested in money, and she gave away her most valuable jewellery to friends.

Among the minor letdowns in this book, for me, were a few factual errors regarding Marilyn. Some of the quotations attributed to her here cannot be verified. For example, ‘Ever notice that “What the Hell” is always the right decision?’ was not said by Marilyn herself, but by a fictional character, loosely based on the actress, in the 1985 film, Insignificance. And when Keogh describes a photograph of Marilyn in a kitchen with Gina Lollobrigida, she mistakes the picture for another taken with Simone Signoret.

Some of Keogh’s observations about Marilyn were strikingly perceptive: for example, Marilyn didn’t like gossip because she had so often been a victim of malicious rumours. This is backed up by many of her friends, who said that she was never gratuitously unkind.

However, I disagreed with Keogh’s assertion that ‘the Marilyn’ personality isn’t as maternal as ‘the Jackie’. Of course, as Marilyn herself died childless, it’s impossible to know for sure. Some friends, like Susan Strasberg, thought that Monroe might have struggled with the responsibility of raising a child.

But others have pointed to her intense love of children, particularly her stepchildren. Marilyn’s repeated miscarriages were among her greatest disappointments, and towards the end of her life, she was considering adoption.

However, this is not a biography, and Keogh’s opinions refer more to general personality traits, found in many different women, than to Marilyn or Jackie as individuals.

Where this book is most effective is in moving beyond reductive stereotypes  and celebrating both women for all that they were. Both had their faults – Jackie could be bossy, and Marilyn was often disorganised – but this makes them more human.

Interestingly, the Jackie/Marilyn campaign in Mad Men is eventually shelved. It was conceived at a time when women were becoming more assertive, and rejecting the labels of the past. Are You a Jackie or a Marilyn?, while never taking itself too seriously, shows that while these two iconic women are part of a bygone age, they also helped to pave the way for the next generation – and that, more than their entangled love lives, is why they still fascinate us today.