McCarthy was born in Seattle, Washington in 1914, to a wealthy Irish-Catholic father. Kevin’s sister, Mary McCarthy, would later find fame as the author of Memories of a Catholic Girlhood (1957) and a controversial novel, The Group (1963.) They also had two brothers, Preston and Sheridan, and a distant cousin, Eugene McCarthy, later became a Democratic senator.

In 1918, McCarthy’s parents both died of Spanish flu, and he and his siblings were separated, raised by relatives and at a series of boarding schools. According to Mary, all of the McCarthy children endured physical and emotional abuse.

Kevin first became interested in theatre while studying in Minnesota. He married actress Augusta Dabney (‘Gussie’) in 1941, and they had three children, James, Lillah and Mary. One of McCarthy’s closest friends was actor Montgomery Clift. They met in 1942 while working together in a play, and their long relationship is detailed in Patricia Bosworth’s biography of Clift. 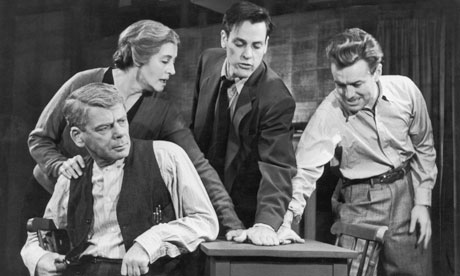 In 1949, Kevin played Biff Loman in the London production of Arthur Miller’s Death of a Salesman, reprising his role in the Hollywood movie two years later. His Oscar-nominated performance was followed by dramas including Drive a Crooked Road (1954), Stranger on Horseback (1955) and An Annapolis Story (1955). 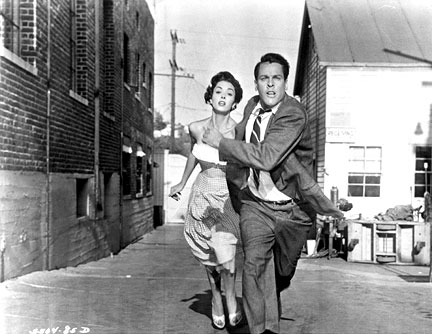 But it was not until 1956 until McCarthy found stardom, in Don Siegel’s Invasion of the Body-Snatchers, set in a nameless California town where residents were being replaced by emotionless alien clones grown in oversized seed pods. This cult classic has often been described as a vindication of red-baiting, and it was even suggested that McCarthy was cast because he shared the surname of notorious US senator Joe McCarthy (no relation.)

However, Kevin’s view of the movie was rather different. ‘There was no assignment of political points of view when we were making the film,’ he told the Bangor Daily News in 1997. ‘People began to think of McCarthyism later. I thought it was really about the onset of a kind of life where the corporate people are trying to tell you how to live, what to do, how to behave. And you become puppets to these merchants that are somehow turning individuals into victims. It seemed to me to be about conforming, the need to control life so it would be more tolerable.’

At 41, Kevin McCarthy had probably left it too late to conquer Hollywood, and most of his film appearances were in minor parts and low-budget movies. However, his talent and charisma were such that he shone even in the most insignificant parts, and his reputation as a ‘character actor’ endured throughout his long, prolific career.

‘However mundane the material,’ Brian Baxter commented in The Guardian last week, it was usually enhanced by (McCarthy’s) lazy charm and natural elegance, his intriguing baritone voice and unconventional good looks.’

McCarthy first met Marilyn Monroe at around this time, at the Actor’s Studio in New York, and he and Augusta got to know Marilyn better after she married Arthur Miller.

In 1983, McCarthy spoke to another of Monroe’s biographers, Anthony Summers, recalling how he had not recognised her one day at the Actor’s Studio, as they sat side by side, watching a badly-acted scene from Chekhov’s Three Sisters. ‘This tousled piece of humanity was sitting on my right, looking like nothing. Then, fifteen minutes later, after I’d interrupted the scene with some fairly rude comments, I looked again. I realised that a breathing, palpitating Marilyn Monroe had developed out of that nothing … I remember looking and thinking, “My God, it’s her” – she’d just come to life.’

Kevin was with Montgomery Clift at the time of his near-fatal car crash in 1956. Clift’s good looks were ruined, leaving him deeply depressed, and putting his friendship with the McCarthys under strain. Their plans to film Tennessee Williams’ You Touched Me! were never realised.

The McCarthys often visited the Millers at their apartment on East 57th Street, Manhattan. Kevin remembers seeing Marilyn ‘in high heels, without stockings, wobbling about in a short black dress. She had gashes in her legs where she’d made a mess of shaving them. She had a strange manner – sweet, poignant, a little distrait.’

Montgomery Clift was also close to both Marilyn and Arthur, and played the role of cowboy Perce Howland in Miller’s first screenplay, The Misfits, alongside Marilyn Monroe and Clark Gable. McCarthy was offered a supporting role, as Raymond Tabor, ex-husband of Monroe’s character, Roslyn.

Marilyn with Montgomery Clift and Kevin McCarthy at a press party for The Misfits, 1960 (Photo by Don Dondero)

Miller sensed a common bond between Monroe and McCarthy. ‘I think it’s important to talk about her being an orphan,’ he said later. ‘There’s something in all orphans, something missing. They want to be liked, to be loved by nearly everybody. I remember I once had a talk with Kevin McCarthy about this. Kevin and Mary lost their parents when they were children. They knew their parents, but they had to grow up without them. Kevin’s a fine actor, good-looking, and he always wanted the big leading parts, but something on him kept him from getting them. I tried to analyse it and I told him, “Kevin, in every part you do you turn on this thing and get all charming with whomever you’re playing opposite. That’s why you’re limited.” And he said he couldn’t help it. That was just his way. Marilyn would do that. The difference, of course, is that Kevin is an intellectual and knows what he’s doing, but he can’t help himself any more than she could.’

One of Monroe’s first, most respected biographers, Fred Lawrence Guiles, wrote that ‘Marilyn asked that Kevin McCarthy be cast (in The Misfits) … He was by then an old friend and she wanted to be surrounded by people who loved her.’

‘They wanted me to come out for it,’  McCarthy told the Columbus Dispatch in 2003, ‘but I was too vain. I said the part was too small. I finally said I would do it if they paid me a hundred dollars a word. They said they would. Turns out it was 29 words. I should have asked for more.’

McCarthy’s presence on the set was a comfort to Montgomery Clift, but despite the gathering of old friends, the 1960 production was fraught from the outset. McCarthy’s only scene occurs early in the story, outside the courthouse in Reno, Nevada, as the Tabors’ divorce is finalised.

With Paula Strasberg and Arthur Miller

‘We only had one scene together,’ he recalled in a 1994 interview with the Boston Globe. ‘(Marilyn) was not in very good shape at the time. She showed up late on the set and kept stumbling over her lines. Pretty soon [director John] Huston was complaining that he couldn’t hear her anyway. Neither could the sound guy. “Did she say her lines, Kevin?” he kept asking me. “Did you hear her say the lines?” Hell, I wasn’t sure myself. She had that throaty, breathless voice, you know.

‘Finally, after six or seven takes, I was afraid I had already given my best performance and had nothing left to give. I suggested to Huston that he reverse the camera and shoot over my shoulder, make sure he got Marilyn in this time. He agreed and stuck a microphone under my necktie. They ran a wire down my pant leg — meaning I could no longer move freely, only pivot — and told Marilyn to speak into my chest. The camera rolled. One take. Bang. Huston jumped up and said, “Perfect, that’s a wrap. Print that one.”

‘That was my scene in The Misfits. Huston never turned the camera back around on me again.’ 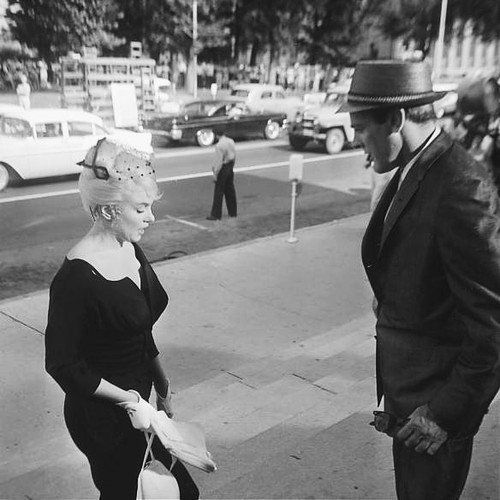 Despite this tortuous process, McCarthy spoke warmly of Marilyn’s performance to Fred Lawrence Guiles. ‘She had considerable anxiety,’ he acknowledged, ‘but like a wise child she used it.’

Miller’s script drew heavily on the personal lives of its stars, and the courthouse scene may be a reflection on Monroe’s prior, turbulent marriage to Joe DiMaggio (or, at least, Miller’s own perception of it.) Ironically, the Millers would divorce soon after filming ended, and Kevin’s twenty-year marriage to Augusta Dabney (later famous for her role as Isabelle Alden in TV’s long-running soap, Loving) was dissolved in 1961.

McCarthy was also a distinguished stage actor, starring in plays by Chekhov and O’Neill on Broadway. In 1978 McCarthy toured in a one-man show, Give ‘Em Hell, Harry!, about President Harry S. Truman.  He described this experience, wryly, as ‘kind of a stunt. When you’re trying to talk to General MacArthur, and he’s not talking back to you, you really have to concentrate.’

McCarthy married Kate Crane in 1979, and they had two more children. They survive him, along with his three children by Augusta Dabney (who died in 2008), a stepdaughter, three grandchildren, and his brother, Preston McCarthy.

1 thought on “‘That Orphan Charm’: Marilyn and Kevin McCarthy”