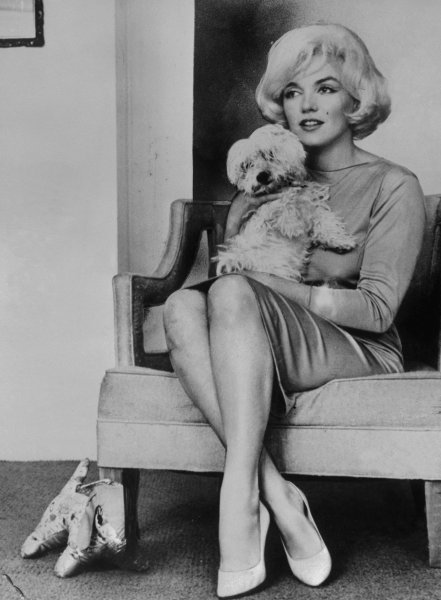 Andrew O’Hagan was born in Scotland in 1968, and lives in London. His first book, The Missing (1995), was televised on Channel 4. O’Hagan has since published four novels, including Our Fathers (1999), which seems to draw on his own fatherless childhood; and Celebrity (2003), based on the life of Lena Zavaroni, a former child star who died after a long battle with anorexia.  As well as contributing essays and reviews for a variety of publications, in 2008 O’Hagan edited A Night Out With Robert Burns, now stocked in schools across Scotland. He has also worked as a goodwill ambassador for UNICEF since 2001.

O’Hagan first wrote about Marilyn Monroe after visiting the Christie’s Auction of her estate in 1999. A subsequent article for the London Review of Books, St Marilyn: the Canonisation of Monroe, explored the star’s enduring popularity and the odd fascination engendered by even her most humble possessions. As O’Hagan recently admitted in an interview with The Times, his own love of Marilyn began during boyhood, when he first encountered “the image of this woman, so unearthly, so classic, connected very oddly with some native sense I had of artistic potential … I had been a shy child before, but after I fell in love with Marilyn I started opening up.”

Among the items on auction in 1999 was a tag, and license for ‘Maf’, Marilyn’s pet dog in the final years of her life. When a related set of six polaroids sold for $220,000, O’Hagan realised that ‘Maf’ was becoming a micro-celebrity in his own right. A cross-bred Scots terrier/Maltese poodle, ‘Maf’ was christened ‘Mafia’ by Marilyn, a tongue-in-cheek reference to her friend, Frank Sinatra who was rumoured to have underworld connections. His name was then shortened to ‘Maf’, or ‘Maf Honey’.

Over the next decade, O’Hagan researched Maf’s origins, and was delighted to learn that “the littlest of dogs” was born in the Scottish highlands, and spent time with the artist Vanessa Bell in Sussex before being purchased by the dog-breeding mother of actress Natalie Wood and shipped to Los Angeles, where he was acquired by Sinatra as a gift for Marilyn, then recovering from her split with Arthur Miller. (At least, that’s how the story goes – but then, as with Monroe herself, Maf’s life is a mythmaker’s dream.)

The device of using animals as characters, and narrators, in fiction is a longstanding tradition. In an article for The Guardian, O’Hagan writes, “there are times when it might take an animal’s perspective to restore, in literary terms, a character pitifully drained of their humour and humanity, even a person as drained as Marilyn Monroe.”

In the half-century since her death, Monroe has been the subject of countless books, some enlightening, many exploitative.  What may initially seem to be a rather frivolous, gimmicky addition to the Monroe genre – her dog’s story – actually works very well.

Monroe had few close relationships and, despite her fame, thought of herself as an outsider. However, her fondness for animals is well-known, as she once told a friend, “Dogs never bite me. Just humans.” Marilyn felt at ease with animals in the same way she did with children and the elderly, because they wanted only companionship and gave love unconditionally. Animal lovers will easily relate to the bond that grows between Marilyn and Maf.

The novel is written from Maf’s perspective, and in his voice. In O’Hagan’s hands, Maf is both a socialist and bon viveur, with a lively mind and hankering for adventure. His strong opinions about people and situations guide the reader on a picaresque journey to America in the early 1960s, the Camelot era, when hope briefly triumphed over cynicism. Maf’s loyalty to those he loves, especially Marilyn, is staunch, and he soon captures the reader’s affections. In a somewhat wayward narrative peppered with lists, footnotes and dialogue, O’Hagan’s curiosity leads the way.

Some readers may find this conceit too far-fetched, but it actually seems quite appropriate for an icon like Monroe, who once mused, “I always had too much fantasy to be a housewife. I guess I am a fantasy.” Never pretentious or condescending, O’Hagan’s narrative exudes a sense of fun all too rarely found in today’s literary fiction.  “People have no head for miracles,” Maf explains in the novel’s opening pages. “They are pressed into shape by the force of reality, a curse if you ask me…(dogs) have none of that fatal human weakness for making large distinctions between what is real and what it is imagined.”

The reader sees the world from Maf’s perspective, often literally at ankle level. He has an eye for detail, from the decor of Marilyn’s haunts to the shoes worn by her friends and acquaintances. Like most dogs, Maf has a keen sense of smell and can trace his mistress by the lingering aroma of her favourite perfume, Chanel No. 5.

Other than Marilyn, Maf is fond of the servants in his various homes; Lena in New York, Mrs Murray in Los Angeles. Marilyn’s young fan, Charlie, is possibly based on James Haspiel, one of the ‘Monroe Six’, a gang of teenagers who Marilyn befriended. But as ‘Charlie’ is an ambitious young man in publishing, it’s likely that there is something of O’Hagan in him as well. It’s hard to imagine many celebrities today allowing their fans into their lives – this partly reflects Marilyn’s warm, genuine nature, but also, in some ways, a more relaxed era.

There are also some charming ‘guest appearances’ by Carson McCullers and Ella Fitzgerald, and a touching conversation with President Kennedy – who, like Maf, notices “the way she listened, even as he wished to ask her about success.” O’Hagan takes a broad view of Marilyn’s experiences but avoids undue speculation. “Those, like me, who like myths more than facts, will enjoy the notion of the Marilyn and the president together,” Maf concedes. “Yet they were only in each other’s company a few times … enjoying a fondness that history would consecrate into something larger than life.”

An extended episode depicts Marilyn and Maf’s attendance at a literary party, and makes for lively satire, especially if you’re familiar with the writers and artists involved. The high-point of this interlude comes when Maf bites Lillian Hellman’s ankle after she insults his hero, Leon Trotsky. By contrast, Marilyn observes the unseemly behaviour of Manhattan’s intellectual elite with fond amusement.

Marilyn, as described by O’Hagan (via Maf), is not the bombshell of legend but “an artist to her fingertips…a strange and unhappy creature, but at the same she had more comedy to her than anybody I would ever know. More comedy and more art.” O’Hagan intersperses quotations from interviews with Monroe into the fictitious dialogue with some conviction, and it’s striking that on the rare occasion where Monroe repeats a line from one of her movies in ordinary conversation, she is playing at “being her”, masking her true self.

This disguise is most often necessary in the company of other celebrities, particularly Frank Sinatra, with whom Marilyn had an on-off romance. Behind his own veneer of slick charm, Ol’ Blue Eyes, as portrayed by O’Hagan, comes across as an egotistical bully. In a later chapter, covering an ill-fated weekend at Sinatra’s Cal-Neva Lodge, O’Hagan shows Sinatra losing his temper after Kennedy declines to join the party. The scene begins as savage, dark farce, then descends into bitter pathos as Sinatra turns his rage on his sweetheart: “Marilyn might have spent her life searching for someone with the imagination to love her,” Maf reflects, “and now she was faced with the ruination of all these hopes, Sinatra looking at her with pure hatred, saying, ‘You’re so damn stupid, Norma Jeane. You know that?'”

Another harrowing chapter depicts an analytic session with Marilyn’s therapist, Marianne Kris. A dedicated and apparently rather intransigent Freudian, Dr Kris urges an unwilling Marilyn to discuss her father, whom she had never really known. Marilyn later slips into depression and is hospitalised, with only Maf for company. “I loved being her guardian,” Maf admits, “but I wasn’t much good … I absorbed her dark mood.”

The post-war America of O’Hagan’s imagination is defined by diversity, if not equality. Segregation and racism were still rife, but the Civil Rights movement was at last gaining ground. Maf, himself an immigrant, first lives in the chaotic household of Natalie Wood and her Russian parents, and spends a blissful evening at a Texan drive-in cinema with some teenage dog-sitters. Even Marilyn, once Norma Jeane, is constantly reinventing herself. This sense of a country and people held together by their belief, however tenuous, that anything is possible, is echoed by Maf’s conversations with other dogs on walks in Central Park, all distinct characters, with stories to tell.

In the last months of her life, Marilyn moved back to her birthplace, Los Angeles. She bought a modest bungalow in the suburbs and busied herself decorating it in the Spanish style she loved. There was also a brief, joyous trip to Mexico, where Maf meets the actor Cantinflas.

However, when Monroe began work on a new film, her demons returned. At the end of her life, Marilyn seemed to oscillate between hope and despair. O’Hagan chooses not to dabble with the conspiracy theories that surround the subject of Marilyn’s death. Her loneliness is palpable though, and very human. One of the most touching moments occurs when Marilyn acts in a scene from Eugene O’Neill’s play, Anna Christie, with Maf describing how his ‘fated companion’ enraptured an audience of sceptical drama students.

Readers hoping for a ‘Marilyn novel’ per se may be disappointed, as O’Hagan’s novel is surprisingly ambitious and multi-layered. It is the latest in a long line of Monroe-inspired fictions, including Joyce Carol Oates’ Blonde and my own novel, The Mmm Girl. While O’Hagan does not, finally, solve the riddle of why Monroe keeps ‘running into people’s unconscious’, he does give us a tantalising glimpse at what it must have been like to know her, and this is a delightful, and deeply poignant experience.

Reviews have been, so far, mostly positive, with a few dissenting voices. The Irish novelist, John Banville, writes that “the author is plainly in thrall to his subject and his narrative, so measured and sceptical elsewhere, rises to the level of rhapsody when he is writing about her. Yet, for all the loving concentration he lavishes on her, she remains an elusive presence.” Sarah Churchwell, author of a ‘meta-biography’, The Many Lives of Marilyn Monroe, comments, “O’Hagan does Marilyn the justice of making her kind, humorous and sharp-witted,” yet adds a cautionary note: “But if there was one thing Marilyn recognised, it was a dubious compliment. Arthur Miller once offered Marilyn a ‘valentine’ in the shape of a story about her called The Misfits. She divorced him soon after.” 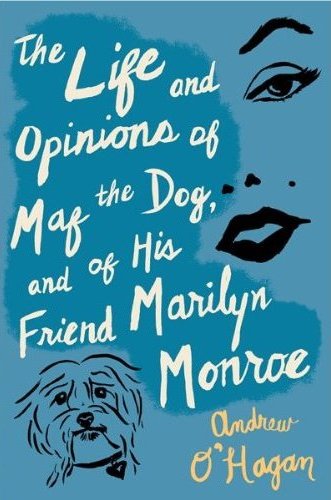 The Life and Opinions of Maf the Dog and of His Friend Marilyn Monroe is available now in hardback and a special paperback export edition, which currently sells at a bargain price of £6.50 on Amazon’s British website. It will subsequently be published in the US in December, with a different, and in my opinion slightly better cover design. For readers who can’t wait that long, however, the British hardback can be ordered now from the Book Depository, with free shipping worldwide.

14 thoughts on “Maf the Dog, and Marilyn”