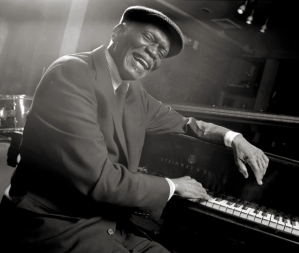 Hank Jones, one of the world’s greatest jazz pianists, has died in Manhattan aged 91. Born in Mississippi in 1918, he grew up in Pontiac, Michigan. Jones was raised in a large, musical family. Though his father, a Baptist deacon, disapproved of jazz, Hank began performing locally at the age of thirteen.

In 1943, Jones moved to New York. From 1947-51, he toured the globe with the Jazz at the Philarmonic orchestra, accompanying Ella Fitzgerald. He later worked with legendary ‘big band’ conductors like Artie Shaw and Benny Goodman, and joined CBS Studios as a staff pianist in 1959, a position he held for seventeen years.

Jones stands at the edge in ‘A Great Day in Harlem’, an iconic group photo of jazz luminaries published in Life magazine in 1958. He seemed content to let others take the spotlight, and brought out the best in the soloists he accompanied – including everyone from John Coltrane and Charlie Parker, to Frank Sinatra.

Though less famous than other pianists like Oscar Peterson or George Shearing, Hank was highly respected in the music business. Staying true to his religious upbringing, Jones remained teetotal all his life and never used profanity in his speech.

After leaving CBS in 1974, Jones’ career continued to flourish. He conducted a Broadway show, Ain’t Misbehavin’, based on the music of Fats Waller. He has appeared on over a hundred albums, including recent solo work For My Father (2005), and accompanying singer Diana Krall on ‘Dream a Little Dream of Me’ for We All Love Ella, a Fitzgerald tribute, in 2007.

On May 19, 1962, Hank Jones accompanied Marilyn Monroe when she sang ‘Happy Birthday’ to President John F. Kennedy as the finale to a gala in his honour held at Madison Square Garden. Monroe’s sensuous rendition is now viewed as a high watermark in modern American history. ‘She was very nervous and upset,’ Jones told NPR in 2005. ‘And, I guess, who wouldn’t be nervous… singing to the president?’

Other musicians who played with Marilyn that evening tell a similar story.  ‘She was very friendly, very friendly, very quiet,’ said trombonist Robbie Robinson. ‘She was a nice gal.’ Describing the rehearsal process, he added, ‘We were there from seven in the morning until about nine at night. She didn’t get one take. Because she was so shy. And so what they did, they said, OK, let’s lay one down with just the orchestra. The next day she came in by herself, and dubbed her song over the tape of the orchestra, with no trouble. She just was really shy, you know…’

Record producer Phil Ramone has recalled, ‘An armory had been transformed into a massive theater for the president’s birthday celebration and I was handed the terrifying job of doing something with Marilyn Monroe’s appearance, which turned out to be the most fun I’d ever had. She was so sweet. She looked sensational. And I looked like a deer in headlights. She comes out and sings that song like it’s never been sung before or since, and all we have is some crummy 16mm film footage of it.’