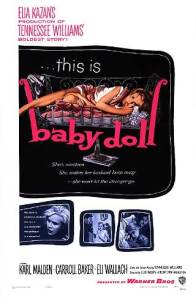 This article can also be read on the Immortal Marilyn website

‘In her movies,’ Marie Clayton wrote in Unseen Archives, her 2005 pictorial biography of Marilyn Monroe, ‘she projected a unique and fascinating persona — a child-woman who was both innocent and full of sexuality, someone men desired, but women found unthreatening. In real life,’ Clayton adds, ‘she was a beautiful and complex woman with deep insecurities, who just wanted to be loved.’

The phrase ‘child-woman’ is frequently used to describe Monroe, and depending on the author, its meaning can be both positive and negative. This little-understood term is at the root of popular mythology surrounding Monroe. In her essay, The Lure Of The Child-Woman, Anita Saran traces this archetype back to the Greek goddess, Persephone, the young daughter of Demeter, who was picking flowers in a wood when Hades kidnapped her and made her his Queen of the Underworld.

In her 1986 book Marilyn: Norma Jeane, Gloria Steinem offered a feminist perspective on the ‘child-woman’ phenomenon. ‘For women,’ she commented, ‘Monroe embodies kinds of fear that were just as basic as the hope she offered men: the fear of a sexual competitor who could take away men on whom women’s identities and even livelihoods might depend; the fear of having to meet her impossible standard of always giving – and asking nothing in return; the nagging fear that we might share her feminine fate of being vulnerable, unserious, constantly in danger of becoming a victim.’

Monroe’s own childhood was troubled. She never knew her father, and her mother spent many years in a psychiatric hospital. The young Norma Jeane moved between family, friends and foster carers, finding an escape from life’s uncertainties in the movies of Hollywood’s ‘golden era’, the 1930s. In her 1954 memoir, My Story, Monroe admitted to having been sexually molested by a lodger in a boarding house.

As she approached adolescence, Marilyn became aware of her physical allure and the sense of power it gave her. ‘Suddenly, everything opened up,’ she recalled. ‘Even the girls paid a little attention to me because they thought, “Hmmm, she’s to be dealt with!”’

At just sixteen, Norma Jeane was married to the ‘boy next door’, mechanic Jim Dougherty, thus becoming a ‘child-bride’.  Dougherty remembered Marilyn as a curious mixture of emotional maturity, far beyond her years, and childlike innocence – she became distressed whenever Jim was away from her, and played with dolls while waiting for him to return.

‘Daddy’, Marilyn’s pet name for Jim and her next two husbands, was commonly used by American women at the time to describe their lovers. But like many other wartime couples, the Doughertys drifted apart. 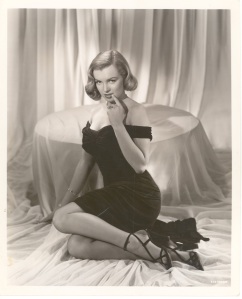 Marilyn forged a career for herself as an actress, winning the breakthrough role of Angela Phinlay in The Asphalt Jungle (1950.) Angela is the mistress of a much older man, played by Louis Calhern, and to placate the censors, she was euphemistically referred to as his ‘niece’. However, there is no mistaking the subtext in Marilyn’s performance, suggesting childish naïveté and blatant sex appeal simultaneously.

Monroe’s subsequent roles played on this ‘childlike’ quality, but with rather less subtlety – she had a natural gift for comedy, and was increasingly cast as a ‘dumb blonde’, which brought her stardom but also some frustration at being stereotyped. Given the lightweight material, it is a testament to Marilyn’s talent that she made characters like Lorelei Lee and ‘The Girl Upstairs’ witty and sympathetic.

In 1951, Marilyn had an intense affair with Elia Kazan, a prestigious director in Hollywood and on Broadway. Kazan introduced Marilyn to her future husband, playwright Arthur Miller. Monroe later wrote to her psychiatrist, Dr Ralph Greenson, ‘Remember I told you Kazan said I was the gayest girl he ever knew and believe me, has known many. But he loved me for one year and rocked me to sleep one night when I was in great anguish.’

By 1955, Marilyn was living in New York and studying with Lee Strasberg at the Actor’s Studio. She had abandoned her exploitative Hollywood bosses and established her own production company with photographer Milton Greene. She was also in love with Arthur Miller, who had recently fallen out with his friend, Kazan, during the ‘red-baiting’ trials when Elia had become an informant, while Arthur refused on principle. 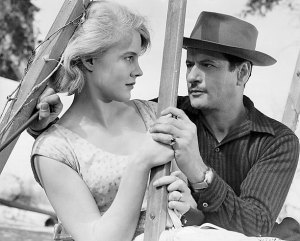 Williams’ story is farcical, bordering on the grotesque. It deals with the decline of the old South, in all its gentility and bigotry, and like all the characters, Baby Doll represents humanity in flux. She is chronically immature and dependent, yet longs to break free from her loveless marriage. ‘Sometimes, big shot, you don’t seem to think l’m very intelligent,’ she rebukes Archie Lee in a funny, if slightly pathetic aside. ‘l’ve been to school in my life…and l’m a magazine reader.’

Marilyn Monroe was said to be Williams’ first choice as leading lady, and later spoke of her admiringly as a ‘golden girl’ and a ‘comedienne’.  But Kazan, the director, chose a younger, lesser-known actress instead. Carroll Baker was a Broadway actress and a member of the Actor’s Studio, where she would meet Marilyn, surrounded as usual by men:

‘She turned to say hello to me,’ Carroll wrote breathlessly in her 1986 memoir, Baby Doll, ‘and presented me with that same seductive quality of ‘come-on’! I suddenly felt drawn to her and leaned in a bit closer than necessary to accept her outstretched hand. Her hand was lusciously warm and plump, and I found myself clinging to it that added moment. Maybe I imagined it, but I thought I smelled the fruity aroma of sex.’ 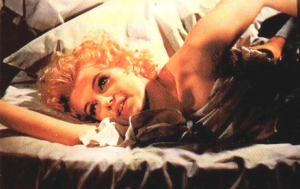 Perhaps Kazan was wary of hiring an old flame, especially now that Marilyn was involved with Arthur. Or he may not have wanted to work with Marilyn because she had a reputation for being ‘difficult’. At nearly thirty, Marilyn was perhaps a little too old to play Baby Doll, despite her ‘child-woman’ persona. She would soon win the lead in Hollywood’s adaptation of William Inge’s play, Bus Stop, earning critical praise as the showgirl Cherie, a Southerner like Baby Doll but sadder and wiser.

However, Baby Doll was controversial from the outset. Condemned by Time magazine as ‘the dirtiest American-made motion picture that had ever been legally exhibited’, it was picketed by the Catholic Legion Of Decency, and they succeeded in having the film withdrawn from most American theatres. Baby Doll was also banned in several other countries, including Sweden. It is now regarded as something of a cult classic, paving the way for an even more scandalous movie, Lolita (1962.) 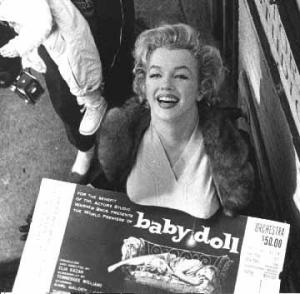 The loss of Baby Doll seemed not to faze Marilyn, who acted as ‘usherette’ at a preview and later attended the premiere. She remained friendly with Kazan, and occasionally met Tennessee Williams socially. Ironically, Williams’ emotive, lyrical style was much closer to Marilyn’s own persona than the detached, moralistic plays of Arthur Miller.

Monroe later performed a scene from Williams’ most famous play, A Streetcar Named Desire, at the Actor’s Studio, commenting to her reporter friend, W.J. Weatherby, ‘I’d like to play that on Broadway when I’m older. I like the last line so much. She says – I forget the exact words – something about she’s always had to depend on strangers for kindness. I know what she meant. Friends and relatives can let you down. You can depend on them too much. But don’t depend on strangers too much, honey. Some strangers gave me a hard time when I was a kid.’

After Marilyn’s death, Carroll would win another role Monroe had coveted, that of another sex symbol in Harlow(1965). In her autobiography, Baker recalled her final meeting with Marilyn in 1962. ‘Remember when Twentieth Century-Fox fired Marilyn?’ she wrote. ‘She told Life magazine that ‘that was not where she lived’. Sure, but I knew better. I knew that was right where she lived! Remember how she changed after that? Remember how she looked? Remember how she and Pat Newcomb used to sit at La Scala’s every night, and poor Marilyn looked so tired and unkempt and despondent? Remember the night at their table where I told Marilyn, ‘You don’t need Twentieth. You’re Marilyn Monroe! Go to Europe. Start a new life and a new career. Why, they’ll pave the road with flowers!’ I’ll never forget her answer: ‘I’m alone, Carroll. I can’t go alone.’‘

In the final years of her life, Marilyn regularly visited a psychiatrist. She read and admired Dr Sigmund Freud and was encouraged to re-examine her traumatic childhood. One of Freud’s associates, Dr Fritz Wittel, had an affair with Irma Karczeswka, who he called ‘the child-woman’. Feminists have criticised Freud as a chauvinist, and it could be argued that Freudian analysis aggravated Marilyn’s own feelings of waiflike helplessness.

However, the ‘child-woman’ symbolism surrounding Marilyn also has a more positive connotation. ‘To  understand Marilyn best,’ Arthur Miller said, ‘you have to see her around children. They love her – her whole approach to life has their simplicity and directness.’ Marilyn’s innocent quality has often been mistaken for naïveté, but despite her lack of formal education, she was not ignorant.

‘Winona the child-woman’, a strong and brave chief’s daughter, is a legendary heroine in Sioux Indian folklore. More recently, the Buddhist nun Tenzin Palmo, wrote in her book, Reflections on a Mountain Lake, about ‘a childlike quality of the mind really means a mind which is fresh, which sees things as if for the first time.’

Perhaps, then, it could be said that Marilyn Monroe, and Baby Doll, represent key aspects of the ‘child-woman’ in our modern Western culture. And this phenomenon need not be confined to women. Childlike innocence in an adult, male or female, is often denigrated, just as Marilyn’s frank sexuality was construed by some as ‘dirty’.

But Marilyn’s ‘innocence’ was not defined by any lack of experience, rather it endured despite some very harsh knocks and maybe that is why Monroe remains an inspiring figure to many fans, despite all the retrospective mud that has been thrown at her.

6 thoughts on “Marilyn and ‘Baby Doll’”