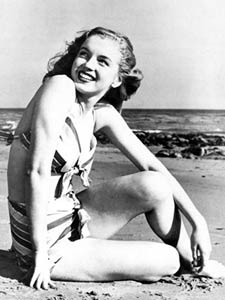 Photographer Joseph Jasgur has died aged 89. Jasgur worked with Marilyn Monroe in 1946. She was then a 19 year-old aspiring model, still known as Norma Jeane Dougherty. Jasgur remembered her as ‘a shy girl, nothing like a typical model…with two sets of clothes – one she had on, and one in the laundry.’

In 1991, Jasgur published a picture book, The Birth Of Marilyn, documenting their collaboration. In the accompanying text, Jasgur claimed that Marilyn had eleven toes – an allegation based on one photograph in which there was a ridge of sand next to one of her feet. However, countless other shots of Marilyn show that this is incorrect.

Like many photographers who worked with Monroe, Jasgur is now celebrated mainly for his association with her – though he had a successful career in his own right, photographing Bogart and Bacall, Jane Russell, Betty Grable and Ronald Reagan.

Friends of Jasgur have said that Marilyn ‘shunned’ him after she found fame. However, it is unclear how close they really were. While Jasgur would always be haunted by the memory of Marilyn, it seems that on her part, theirs was a passing acquaintance.