The World and the Woman, the 1916 silent film starring Jeanne Eagels, will be screened today – preceded by a fragment from an early Louise Brooks comedy – at 4:30 pm in New York’s Museum of Modern Art (MoMA) as part of their ‘To Save and Project‘ series, curated by Dave Kehr and now in its fifteenth season, as Daniel Eagan reports for Film Journal. (And thanks to the Thanhouser Studio restoration project, you can also watch it here.) END_OF_DOCUMENT_TOKEN_TO_BE_REPLACED

Liz Smith, the veteran gossip columnist known as the ‘doyenne of dish’, has died aged 94. END_OF_DOCUMENT_TOKEN_TO_BE_REPLACED 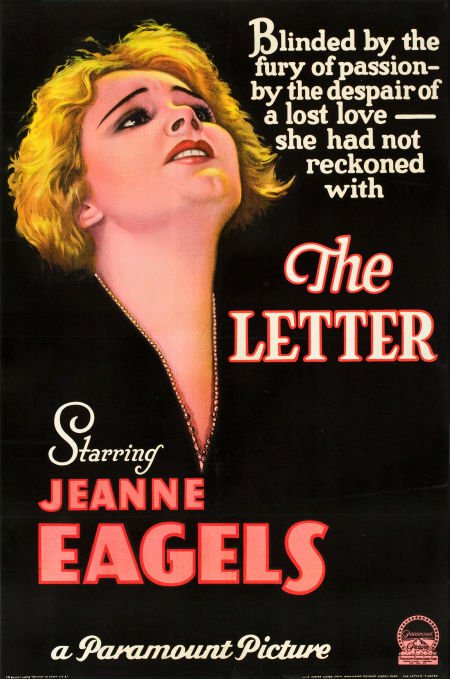 Mick LaSalle, film critic for the San Francisco Chronicle and a champion of Pre-Code cinema, has often praised the few surviving film performances of Jeanne Eagels, who made her name in the theatre. Perhaps the best-known is her first ‘talkie’, The Letter, later remade with Bette Davis. Many viewers today are impressed by the raw power of Jeanne’s acting. In his regular ‘Dear Mick’ column, LaSalle answers an Oakland reader’s question: ‘Do you think that it’s possible to compare the quality of acting between generations?‘

Great acting has a truth, on its own terms, that may inevitably be influenced by its period in history, but which is grounded within the actor — it’s the actor’s truth … A perfect example of this is Jeanne Eagels in The Letter (1929). It’s a wild, mannered, crazy-over-the-top performance, with echoes of an earlier stage tradition. But you can’t take your eyes off her, because she is putting it all on the line and holding nothing back. You finish that movie, and it’s like Jeanne Eagels has just hit you in the face.

You can read more about her remarkable talent in Jeanne Eagels: A Life Revealed.

As I write, the hardcover edition of Jeanne Eagels: A Life Revealed is currently available for just £10.13 on Amazon UK – which is less than half the original price, and over £6 cheaper than the paperback. For readers abroad, it’s now £13.81 from the Book Depository (with free shipping to most countries.) I don’t know how long this bargain offer will last, so if you haven’t bought a copy yet, get it while you can!

It’s hard to believe that two years have passed since Jeanne Eagels: A Life Revealed was published. I feel immensely proud to have been part of bringing her unjustly neglected legacy back to the spotlight, and will be eternally grateful to my writing partner, Eric M. Woodard, for giving me that opportunity. END_OF_DOCUMENT_TOKEN_TO_BE_REPLACED