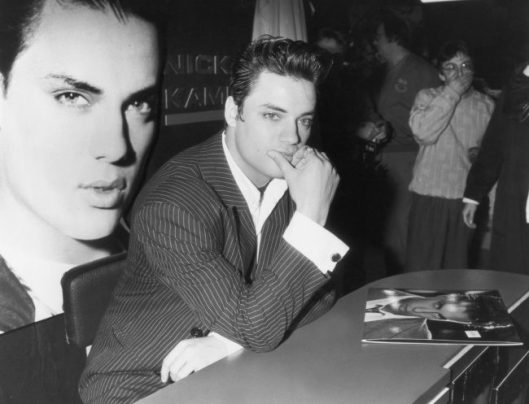 “If you didn’t have a crush on Nick Kamen in the 80s, you probably weren’t there.” – Matt Lucas

Ivor Neville Kamen was born in Epping in 1962, second-youngest in a family of eight, and grew up in the post-war ‘new town’ of Harlow, Essex. Known as Nick, he was of mixed Burmese, Irish, Dutch and English heritage, or as his younger brother Barry would say, “a total product of colonialism.” Nick grew up listening to his older brothers’ records: Otis Redding, Elvis Costello, The Everly Brothers, Gregory Isaacs, Bob Marley, Marvin Gaye, and Nat King Cole (his mother’s favourite.) One brother, Chester Kamen, was a guitarist who worked with Bryan Ferry. “Yeah – we were a good Catholic family,” Nick would reflect, “except we weren’t that good actually! It was impossible to keep an eye on all of us I suppose …”

At school, he recalled, “I was always thinking about something else – singing and sports.” Asked if he had a lot of girlfriends, he replied that “my brother had more.” At eighteen, he moved to London. “I came looking for work – quite literally tramping the streets looking,” he said. “I did anything – working in clubs, shops again and the odd modelling job, just trying to make a living – and always, always knowing it was to get me enough money to make demo tapes, to do my music properly.” 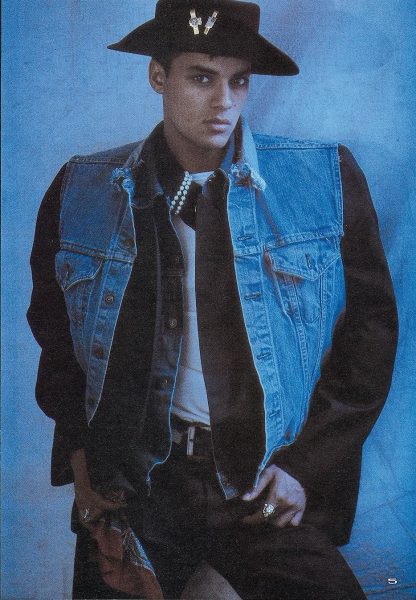 Aspiring artist Barry soon joined him in London, and the pair were recruited by Ray Petri of style collective Buffalo, a major influence on music and fashion throughout the 1980s. In January 1984, Nick made the cover of The Face, embodying the Buffalo look. After ten months in New York with his modelling agency, Nick decided to focus on music – until 1985, when he was offered the chance to star in a television commercial for Levi’s jeans. “It was perfect – I needed money bad, so I did it,” he said. “How was I to know what was going to happen?”

Launderette, to give the iconic clip its title, was the brainchild of advertising executive John Hegarty. Devised to relaunch the Levi’s 501 – ‘the original jean’ – the film was set in a small-town American laundromat of the late 1950s or early ‘60s. As Nick strips down to his boxer shorts and puts his 501s in the washing machine, ‘I Heard It Through the Grapevine,’ the 1968 hit by his hero Marvin Gaye, begins to play. (Gaye had died just two years before the commercial was made. The single was reissued in the wake of the Levi’s ad, reaching No. 8 in the U.K. charts.)

Like a cross between Elvis Presley and James Dean, Nick was the perfect choice of model. Sales of Levi’s soared and he became an overnight celebrity. “I actually did the ad for real!” he said. “The week before, on a Sunday morning in London – I went along to a launderette and took my jeans off. The director was in the corner pretending to do his washing and watching people’s reactions and the film crew were outside filming it which was pretty difficult because the windows were all steamed up. And everyone just sort of looked embarrassed and giggled … They didn’t stare at me or anything, just sort of looked up as if to say, ‘Who’s that idiot?’ Mind you, I think people are used to seeing pretty crazy things these days …”

Nick’s first love was music, and in the wake of his newfound success, he brokered a deal with Sire Records, the New York label headed by Seymour Stein, with an impressive roster including Talking Heads and Madonna. “And the record company didn’t even know I was the same guy in the ad,” Nick insisted. He began spending more time in New York with his girlfriend, model Talisa Soto.

“The first time I spoke with [Madonna] I was in a record company office in New York and she came on the phone,” Nick told reporter John Blake. “She said she was going to write me a song. She was so easy to talk to. And all I could say was: ‘Fantastic, get it over here.’ It was only afterwards, when I put the phone down, that it hit me who I had been talking to.” 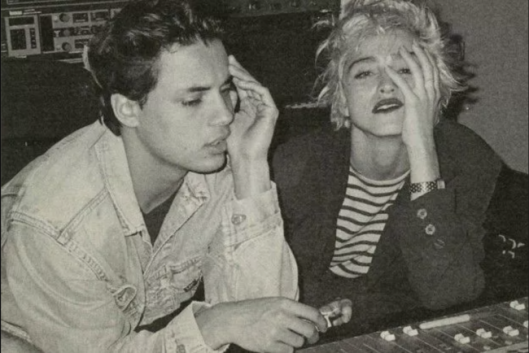 “I said, ‘wow, this guy’s got everything,’” Madonna gushed about her new protegé in a BBC radio interview. “He [Seymour Stein] sent me a tape of four of his songs and the Levi commercial and a demo video that he [Kamen] had done. You know, he’s got so much charm and charisma and there’s something there in the eyes … I called Seymour up and said ‘how about if I produce the record because if I don’t … they might change the character of it … and I want it to be really good’ … and he said, ‘I would’ve asked you but, I mean, I didn’t think you’d have the time,’ but I figured it was only one song so it would only take about a week if we really organised ourselves.”

‘Each Time You Break My Heart’ was written by Madonna and Steve Bray for her third album, True Blue (you can hear her demo here.) Madonna also came from a large immigrant family and had been raised as a Catholic in Detroit, birthplace of the Motown sound which Nick adored. Her mother died of cancer when she was just five years old, while he had lost his father at fifteen. She invited him to Los Angeles for five days and they recorded the song, with Madonna singing backing vocals. (She had wanted to produce his album, but was busy filming Who’s That Girl at the time.)

“She’s not giggly but she is quick and she is up all the time,” Nick said. “It’s easy for people to get too serious in the studio, but Madonna never does. We are making music, not carrying out brain surgery.” Asked if they were attracted to each other, he replied, “It was so intense in the studio trying to get the track finished that the idea of seducing her didn’t even cross my mind.”

‘Each Time You Break My Heart’ was released in November 1986, reaching No. 5 on the Official U.K. Chart. The back cover featured a black-and-white photograph taken in the studio. Although a hit across Europe, the single failed to make the Billboard Top 100 in the U.S. However, a remix by British DJ Shep Pettibone – who would go on to produce Madonna’s ‘Vogue’ and Erotica – reached No. 5 on the Dance Club Songs chart.

With his soft, whispery voice, Nick Kamen sounded almost like a male Madonna. The stylish video for ‘Each Time You Break My Heart’ was helmed by Jean-Baptiste Mondino, director of Madonna’s ‘Open Your Heart,’ and child model Felix Howard – another Buffalo alumni – co-starred in both clips.

“While ‘Each Time You Break My Heart’ might harbor that 50s-era pastiche Madonna was fond of using on True Blue (as well as the same pastiche that appeared in Kamen’s illustrious Levi’s commercial),” Genna Rivieccio notes on her Culled Culture blog, “there is nothing ‘chaste’ about the seedy aesthetic Mondino provides for the visual of Kamen as ‘nightclub’ singer in the vague style of campiness that Isabella Rossellini provides in Blue Velvet.”

Although there was no question of romance between Nick and Madonna – then married to Sean Penn – that didn’t stop U.K. tabloid The Sun from publishing a cover story headlined ‘MADONNA’S LEVI LOVE!’ “It’s all lies,” a furious Nick told Smash Hits. “It’s all complete bollitas, as they say in Spain … I admire her. I always admired her because she’s a worker and she’s brilliant at what she does. I mean, I wasn’t even in awe of her because she’s just so straight, you know? And being with her in America, doing the song just felt right – why not?”

His eponymous debut album included a cover of The Four Tops’ ‘Loving You is Sweeter Than Ever,’ which reached No. 16 in the U.K. chart. His second album, Loving You (1988), was helmed by Madonna’s co-producer Pat Leonard, with the singer once again performing backup on ‘Tell Me,’ but it didn’t match the success of their earlier collaboration. Meanwhile, his brother Chester would play guitar on Madonna’s next album, Like a Prayer (1989.)

‘I Promised Myself’ headed up Nick’s third album, Move Until We Fly (1990.) His fourth and final album, Whatever, Whenever followed in 1992. He would go on to date model Tatjana Patitiz and television presenter Amanda De Cadanet, but by the early 2000s, he had tired of the spotlight. (A deluxe edition of his debut album, and a 6CD box-set, The Complete Collection, are available from Cherry Red Records.)

Nick’s closest sibling, model and artist Barry Kamen, died aged 52 in 2015. Shortly afterwards, Nick was diagnosed with bone marrow cancer. During his long illness he earned the family nickname of ‘Lazarus’. On 4th May 2021, Nick Kamen died aged 59 at the Notting Hill home he shared with his partner of fifteen years, Lucinda Cary, and her daughter. Among the many celebrities to pay tribute were Steve Bray, who described Nick as a “beautiful soul,” while Madonna posted on Instagram: “It’s heartbreaking to know you are gone. You were always such a kind, sweet human and you suffered too much. Hope you are happier wherever you are, Nick Kamen.”