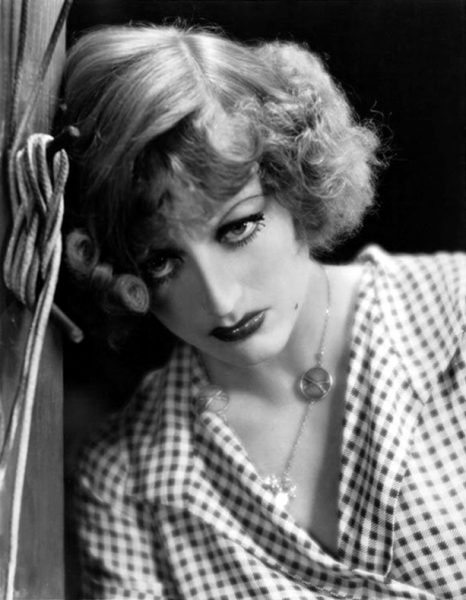 While it is generally agreed that no actress surpassed Jeanne Eagels’ performance as Sadie Thompson in Rain, many have tried. Among them was none other than Joan Crawford, in a 1932 talkie which was widely panned on release (and later, by Crawford herself.) While at first her Sadie may seem close to parody, a more striking portrayal soon emerges, as Imogen Sara Smith writes in ‘Two-Faced Woman’, an article for The Chiseler. (Smith also notes that the original play was alluded to in another pre-code classic, Scarface, “when Tony Camonte takes his boys to improve their minds at the theatre.”)

There is nothing fundamentally implausible about the play’s premise, in which the domineering missionary Alfred Davidson converts Sadie, a loose woman with a shady past, and then succumbs to his own lust for her. But as written, and more importantly as played in the 1932 film, the story comes across as something much stranger and more disturbing.

The problem is that Davidson, as played by Walter Huston, is so hateful, so gratingly smug, spiteful, and bullying, that it’s impossible to believe he could convert anyone. Every one of the sympathetic characters sees through him immediately and despises him. He mercilessly persecutes Sadie, coercing the local governor into deporting her back to San Francisco, where she is wanted for a crime she says she did not commit. Sadie lashes out at him furiously—and then abruptly, as though her brain has just snapped, she falls under his spell, reciting the Lord’s Prayer in a robotic, hypnotized voice. Crawford plays the converted Sadie as brainwashed, doped, pathetically clinging to the man who insists that she must be punished, even unjustly, in order to be saved. When she gazes upward with blurry eyes and intones, ‘I must be punished,’ it becomes shockingly clear that this relationship has nothing to with religion; Crawford is playing Sadie as a masochist who gains a sense of worth through submission to a man who breaks her spirit, then grants her fulsome praise and loving approval once she is his slave. This is not a case of spiritual fervor as a substitute for sex; on the contrary. Sadie is a sometime prostitute for whom sex is just a fact of life; she is emotionally enslaved to Davidson because she believes he is a ‘holy man’ who can cleanse her of sin, whose love for her is pure, and this bondage is only broken when he reveals himself to be just like other men.

She is much more successful in this radical transformation than she is in playing Sadie Thompson as she first appears—a vulgar, earthy, good-hearted good-time gal. It’s a part Joan Blondell could have played with perfect ease and natural sympathy, while conveying the kind of secret shame and regret that might lead a woman like Sadie to be vulnerable to a soul-saver. Crawford is anything but easy in the role; her slangy, red-hot-mama act is as caricatured as her look, with so much makeup caked on her face that it’s almost a clown mask. The artificiality is not entirely wrong, since Sadie has clearly developed this persona as her way of getting by, and her forced gaiety and defiant brassiness are put on like her cheap bangles and black fishnets. She’s all nervous energy, constantly fidgeting and fiddling with her clothes and fretting about the constant pounding rain.

Director Lewis Milestone combats the staginess of a filmed play with lyrical, scene-setting shots of raindrops falling on sand and palm fronds and water; and with fluid camera movements that circle around the characters. But it is Crawford’s performance of Sadie’s conversion that makes the movie more than just an artfully crafted but flawed and heavy-handed message drama.