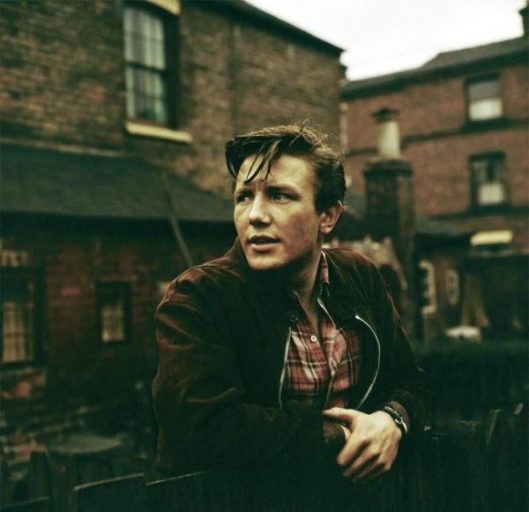 Albert Finney was born in Salford in 1936. His father, Albert Sr., was a bookmaker. He attended Salford Grammar School and won a scholarship to the Royal Academy of Dramatic Art (RADA). After graduating in 1956, he worked in the theatre, and was an understudy to Sir Laurence Olivier.

He made his screen debut with a small role in Tony Richardson’s 1960 adaptation of The Entertainer, another Osborne play which had revived Olivier’s career. It was produced by Woodfall Films, a company founded by Osborne and Richardson. Next up, he played the restless factory worker Arthur Seaton in Woodfall’s seminal ‘kitchen sink drama’, Saturday Night and Sunday Morning. Based on a novel by Nottingham-born author Alan Sillitoe and directed by Karel Reisz, it turned Finney into a breakout star.

Although he wasn’t the first ‘Angry Young Man’, Albert’s rough charisma had a seismic impact, spearing a ‘New Wave’ in British cinema. Among his many unforgettable lines: “I’m me and nobody else. Whatever people say I am, that’s what I’m not because they don’t know a bloody thing about me!” (Another oft-quoted sentiment: “Don’t let the bastards grind you down, that’s what I’ve learned … What I want is a good time. All the rest is propaganda.”)

Hollywood soon came calling, but Albert turned down a multi-picture deal with Sam Spiegel, thereby losing Laurence of Arabia to Peter O’Toole. He remained loyal to the stage, playing the lead in Osborne’s Luther in 1961, but also found time to embody the eponymous playboy in Tom Jones, a rollicking romp based on Henry Fielding’s classic novel, and helmed by Tony Richardson. Released in 1963, the film showed Finney’s light-hearted side and expressed the free-wheeling mood of an era just begun.

Finney enjoyed the good things in life – food, wine, women and fine cigars – but eschewed the self-destructive excesses of his ‘hellraising’ peers, Oliver Reed and Richard Harris. Behind the scenes of the 1967 caper, Two for the Road, he wooed movie legend Audrey Hepburn; and he would later marry that icon of French cinema, Anouk Aimée.

In 1968, he directed himself in Charlie Bubbles, scripted by fellow Salford alumni Shelagh Delaney. Charlie is a successful writer trapped in Swinging London’s gilded cage. On a whim, he heads home to Manchester with his American girlfriend (Liza Minnelli), but finds the tenements where he grew up now demolished. He then visits his ex-wife (Billie Whitelaw) in Derbyshire, and takes their young son to a football match; but is once again an outsider, exchanging small-talk with an old schoolfriend in a private box. The story ends with our hero floating away in a surreal flourish.

During the 1970s, Finney supported his old mentor, Sir Laurence Olivier, in the early days of the National Theatre on London’s Southbank. One of his most intriguing projects was Gumshoe (1971), directed by newcomer Stephen Frears, with Albert playing a Liverpool bingo caller who dreams of being a private eye. He also starred in a musical version of Scrooge, and gave crowd-pleasing turns as Poirot in Murder On the Orient Express and Daddy Warbucks in Annie.

Finney would recreate some of his greatest stage triumphs onscreen, such as The Dresser (1983), and Orphans (1987.) He also appeared in American films such as Miller’s Crossing (1990), and Erin Brockovich (2000.)  In 2002, he played an ailing Winston Churchill in the award-winning TV drama, The Gathering Storm. His final screen role was in Skyfall (2012.) Although nominated for an Oscar on five occasions, he never won and was unruffled.

He disliked giving interviews and rarely courted publicity, preferring life in the grand tradition of a ‘strolling player’ (also the title of an excellent 2017 biography by Gabriel Hershman, who admits, “I couldn’t find one person who had a truly bad word to say about Albert.”) Paul Greengrass, director of The Bourne Ultimatum (2007), recalls his “infectious sense of humour.”

Known for his generosity and egalitarian spirit, Finney treated his co-workers with respect and refused a knighthood, which he saw as perpetuating snobbery. After beating kidney cancer in 2011, Albert died on February 7, 2019, aged 82. He is survived by his third wife, Penelope Delmage, and son Simon Finney, now 60.

Arguably the most gifted English actor of his generation, Albert Finney was also, his biographer writes, “a consummate charmer and a convivial friend” – or as John Cleese tweeted today, a first-class “mensch.”