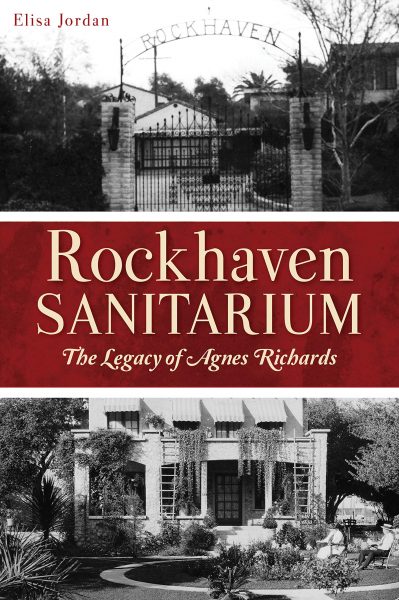 Nestled among the hills and mountain ranges just beyond Los Angeles, Crescenta Valley was home to the indigenous Tongva people for thousands of years. During the Spanish colonial period it became part of the San Gabriel Mission. By the late 1800s, its warm, dry climate was attracting both tourists and health seekers, and after his wife’s death from tuberculosis, Dr. Benjamin Briggs moved there to build a sanitarium for those suffering from lung ailments. His success encouraged others to follow suit, including Merritt Kimball who founded a sanitarium for psychiatric patients. Perhaps the most unique of these pioneering establishments was Rockhaven, a sanctuary for vulnerable women opened by Agnes Richards in the 1920s.

The building still stands today, although it has been closed for over a decade. In 2013, while researching the life of Marilyn Monroe – one of many celebrated figures with connections to Rockhaven – the California historian and journalist Elisa Jordan visited the place where Monroe’s mother lived for more than a decade, and was struck by its “sense of tranquillity.” Her ongoing involvement with this local landmark has now inspired a new book, Rockhaven Sanitarium: The Legacy of Agnes Richards. Elisa also runs LA Woman Tours, exploring the Hollywood haunts of legendary stars from Jean Harlow to Jim Morrison, and other events from the city’s fabled past (in partnership with Scott Michaels’ Dearly Departed Tours.)

Agnes Lepinski was born in Germany in 1881. Her family emigrated to Nebraska when she was young, but she would later claim to have only been educated in Europe, perhaps to avoid widespread anti-German feeling after the First World War. She married David Traviss in 1904, but he died in a car crash two years later, leaving Agnes to raise their son Clarence alone. She worked at Nebraska State Hospital before being promoted to attendant at Independence State Hospital in Iowa, marrying fellow attendant James Richards in 1917.

When the U.S. entered World War I, Agnes volunteered for the Red Cross, receiving specialist training in what is now termed Post-Traumatic Stress Disorder. After completing her nursing degree in 1922, she moved to California, working as head nurse at Patton State Hospital and Los Angeles General Hospital. She bought property in Crescenta Valley and in 1923, Rockhaven Sanitarium was opened, initially with just six incumbents living in a stone house. It was later expanded and would ultimately stretch to fifteen buildings, housing more than 100 women. Although male doctors treated the residents, the in-house staff were all female – and residents were not called patients or inmates, but ‘ladies’.

In its early days, Rockhaven was opposed by a local residents’ association. Referred to the Public Welfare Committee on false charges of allowing men and women to run wild all night, Agnes took Mrs. Oscar Johnson to court for slander, and won. By 1930 Agnes was divorced, and would become an increasingly prominent figure in local civic life, while her third marriage brought lasting happiness.

After the city of Glendale declared eminent domain to widen the road and demolished the entire façade in 1964, Agnes filed for damages, and a new wall and gate was built. Granddaughter Patricia Traviss took over the management of Rockhaven, but Agnes continued working there until a month before her death in 1967. 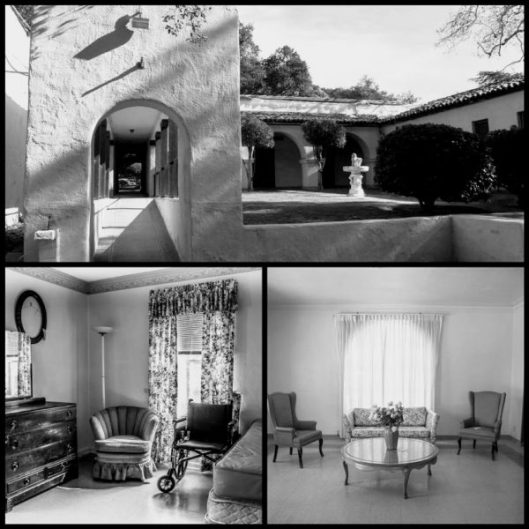 The state asylums where Agnes had been trained were bleak and forbidding: from the prison-like Victorian structures to the poor living conditions, including forced labour and physical violence. Patients were referred to as ‘inmates’, and tales of malnutrition and even torture were not uncommon. Grounds for admission ranged from serious mental illness to more dubious factors like bereavement, epilepsy, paralysis or destitution. In an era when women had fewer civil rights than men, they were often committed by their husbands for postpartum depression, menopausal symptoms, or marital ‘non-compliance’ – as a viable alternative to divorce. These unfortunate women were placed in high risk of violence and sexual abuse from male staff and inmates.

Rockhaven’s intimate setting was a deliberate move away from these dehumanising structures. The employees took care of maintenance and the residents were not forced to work. Instead, they were encouraged to take up gardening or arts and crafts projects. They regularly ventured out for lunches and beauty treatments. Friends and family members would join them for Sunday night dinners, and holidays like Christmas, Easter and St. Valentine’s Day were all celebrated. The annual Mother’s Day tea was a highlight. Live entertainment was provided, and groups of local children frequently came by to sing for the ladies.

While Rockhaven was a private sanitarium, these personal touches were gradually incorporated into the public sector as medical professionals realised the importance of treating patients as individuals, and not cutting them off from the world. By the 1960s, sweeping changes in the field, and improvements in antidepressant drugs, meant that more patients were being treated at home. Rockhaven’s intake was now largely composed of elderly women, either suffering from dementia or too frail to take care of themselves. 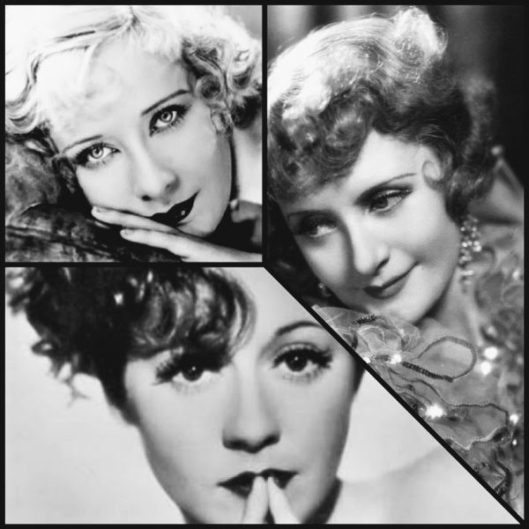 Given its close proximity to Los Angeles, it’s no surprise that Rockhaven housed several prominent performers and others closely linked to the Hollywood greats. Billie Burke had been the toast of Broadway in the early years of the twentieth century. After the death of her impresario husband, Flo Ziegfeld, she rebuilt her career in the movie capital, and is perhaps best-known today as Glinda in The Wizard of Oz. A former ‘Ziegfeld Girl’, Peggy Fears turned producer and founded a glitzy East Coast resort before retiring to Rockhaven.

Josephine Dillon was an acting teacher whose most famous student, Clark Gable, made her his first wife and would remember her in his will. Another resident, Lillian Bleck, was the sister of Gable’s fourth wife, Lady Sylvia Ashley: the glamorous, London-born siblings dedicated themselves to helping refugees during World War II, and while Lillian would outlive Sylvia by twenty years, they were both buried at the Hollywood Forever Cemetery.

Others largely forgotten today nonetheless made valuable contributions to the entertainment world. During the 1920s, violinist Babe Egan led a popular all-girl band, the Hollywood Redheads. She later became a wardrobe mistress for RKO. Local girl Marion Stadler, born in Glendale in 1911, formed a dance partnership with future husband Don Rose and appeared as a ‘Ragdoll Dancer’ in the early technicolor movie, King of Jazz (1930.) The couple toured the world and were married for fifty years. Ada Armstrong Jones, the mother of bandleader and comedian Spike Jones, was also a resident.

Actress Gwen Lee, whose striking blonde looks led to her being dubbed ‘the beautiful flapper’, was not so lucky. After being named a WAMPAS Baby Star by motion picture advertisers in 1928, she played supporting roles in several high-profile films at MGM. But after being briefly (and perhaps wrongly) committed to Rockhaven at her mother’s behest in 1932, Gwen’s career never recovered. 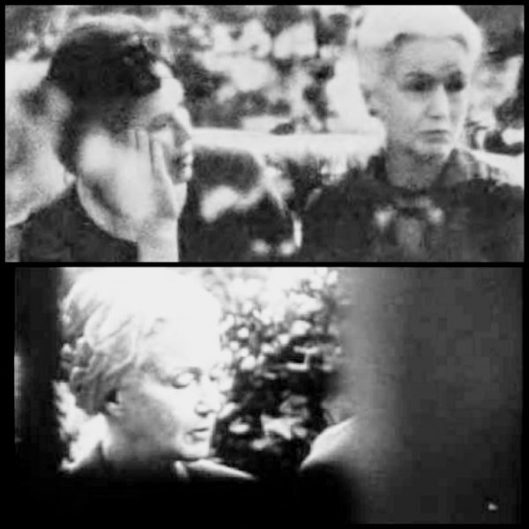 When she came to Rockhaven in 1953, Gladys Monroe was fifty years old and had spent much of her adult life in and out of psychiatric care. Diagnosed with paranoid schizophrenia in 1935, she suffered from religious delusions and persecution mania. Her youngest daughter, Marilyn Monroe, was one of the world’s biggest movie stars; but because of Gladys’ illness, they had never been close and it was Marilyn’s business manager, Inez Melson, who made the arrangements with Rockhaven.

In 1959, Melson would become Gladys’ conservator. Marilyn left her mother a $100,000 trust in her will, with $5,000 to be paid annually for her care. But after her tragic death in 1962, Monroe’s estate was embroiled with heavy taxes and creditors. Rockhaven agreed to waive Gladys’ fees, and in 1965, Marilyn’s attorney made the first back-payments. While Gladys’ response to losing her famous daughter was typically vague, more turmoil was to follow: she briefly escaped in 1963, and would attempt suicide in 1966. A year later, her eldest daughter Berniece Miracle (Marilyn’s half-sister) brought Gladys to live with her in Florida, where she passed away in 1984.

Bringing Gladys’ troubled life out of the shadows, this chapter is essential reading for Monroe fans. But Rockhaven was much more than a footnote to Hollywood history, and in tracing the stories of other, lesser-known residents, Elisa Jordan proves her worth as a local historian. Among the remarkable women featured are trailblazers such as Edith Keyser White, one of the first black teachers to work in Los Angeles’ desegregated school system; Betty Jane Fairley, the first female bus driver in the city’s school district; and M. Louise Jung, one of the first women to graduate from UCLA’s dental school.

Others were professional women of distinction, including Dorothy George Springer, a government photographer who created a pictorial record of Northern California’s Pit River Indians in the 1930s; Nedra Lucretia Salisbury, a former air stewardess who nursed the fallen at Pearl Harbour in 1941, and became a Red Cross volunteer; Franciszka Radziwon Clark, a Women’s Air Service Pilot turned newspaperwoman with a love for travel and fashion; Edith Van Buren, a restaurateur and bookstore manager; and Bernice Zurbach, a delegate for the United Nations Decade of Women during the 1970s.

There are also stories of migrants to California, including Anna Martin Rounds who made the journey from Maryland with her childhood sweetheart in 1930. One of the book’s most moving passages retells the life of Tamaye Ishida Shigematsu, a Los Angeles native who met her future husband while detained in an internment camp alongside her Japanese parents during World War II.

‘The Lady of Rockhaven’

Rockhaven was sold to a Los Angeles home-care company in 2001, when Patricia Traviss retired. It remained open for five more years, but the signature touches that made it so special were neglected. By 2006, it was considered too expensive to maintain and both residents and staff were left with their futures in doubt. Plans to raze the property outraged local people, and Rockhaven’s award-winning landscape gardener Ivan Jones – one of the few men among the long-term staff – came out of retirement to protest the new plans.

In 2008, the City of Glendale purchased Rockhaven for $8.25 million. However, the economic downturn meant that plans to repurpose Rockhaven as a park, community centre and public library were quietly abandoned. The property costs $50,000 a year to maintain, helped by the volunteer group Friends of Rockhaven, who also run guided tours of the grounds for members of the public.

In 2016, the City of Glendale accepted a developer’s proposal to turn Rockhaven into park space with space for retail boutiques, as well as nonprofits and a Crescenta Valley museum. Since publication, however, progress has stalled and the Friends of Rockhaven are once again campaigning to save this California landmark. Its high media visibility – including Elisa Jordan’s highly readable history, an Emmy award-winning documentary, articles in the national press, and an anthology published by Which Witch LA – confirms Rockhaven as a beacon of women’s history, and a place of natural beauty enriching the local community.