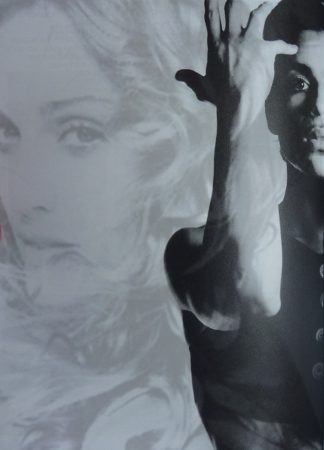 “Most people are born dead/But I was born alive,” Prince Rogers Nelson sang on one of his final cuts, ‘Way Back Home.’ In Art Decades: Volume 8 I pay tribute to Prince and explore his volatile relationship with fellow pop icon Madonna.

In a year dogged by horror and sadness, a rainbow background on the first page commemorates the victims of the recent mass shooting at the Pulse nightclub in Orlando, Florida. For this issue’s cover story, Jeremy Richey interviews German filmmaker Jörg Buttgereit. “Watching Nekromantik for the first time reminds me of the first time I heard The Slits,” Jeremy writes. “This was art that wasn’t driven by profit or sponsored by a corporation. This was the realisation that a DIY attitude and spirit didn’t have to just exist as a dream but could actually manifest itself into great art.”

A new retrospective of Buttgereit’s work, Sex, Murder, Art, has now been released as a Blu-Ray boxset by Cult Epics, whose owner Nico B has rescued Bettie Page’s peep-shows and early Nastassia Kinski films from obscurity. Elsewhere, a lavish visual spread glories in the retro-pulp heroines of graphic artist Justin Coffee, while Michael A. Gonzales depicts the travails of a hopeful young musician in 1970s New York with warmth and poignancy in his short story, Under the Influence of a Groove.

Regular contributor Heather Drain interviews musician and screenwriter Les Bohem in epistolary form, which is revealing on both sides. “Rock guys get the stage lights, the squeals, the glitz, grime and glory,” Heather observes. “Writers get anaemia, assorted complexes …”

Art Decades: Volume 8 is available now from Amazon (for £13.85 in the UK, or $18 in the US.) Direct subscriptions can be ordered here.