Harry Montagu Love was born in Portsmouth, Hampshire on March 15, 1880. His father was an estate agent. He became a newspaper illustrator during the Anglo-Boer War at the turn of the century. By 1911, he was a professional actor. He sailed to America in 1913, supporting the English actor, Cyril Maude, in Grumpy, which had a successful Broadway run followed by a nationwide tour. After returning to New York, he appeared in George Bernard Shaw’s Arms and the Man and Candida at the Garrick Theatre. One of Love’s first films, Hearts in Exile (1915), starred Clara Kimball Young.

On February 5, 1916, the New York Dramatic Mirror revealed producer Joseph Brooks’ plans to revive C. Haddon Chambers’ 1891 play, The Idler, at the Shubert Theatre on March 27. Brooks filled the main roles with some of the biggest names of the English stage: Phyllis Neilson Terry, Marie Tempest, Montagu Love, and Cynthia Brooke. At twenty-six, Jeanne Eagels was the only American in the cast.

Rehearsals for The Great Pursuit (the play’s new title) began on February 18. The Dramatic Mirror announced that it would open in Canada on March 13. On March 2, however, the Evening Telegram reported that after an enthusiastic reception in Toronto, Brooks had decided to bypass Montreal, and so The Great Pursuit came to New York earlier than expected, opening on March 20.

“The Herald’s statement that ‘the play is overburdened with dialogue’ coincides with the view of The Evening Sun’s that ‘it is just an English drawing room comedy-drama, 1916 pattern,’” Billboard summarised in its April 1 edition. “And this The Evening World echoes with emphatic ‘Amen—heaven help it!’ Added to these is the deeply-drawn sigh of the Tribune: ‘It is hopelessly aged dramatic material.’”

The public stayed away from The Great Pursuit, with box office receipts peaking at a paltry $500 to $600 per night. After only twenty-nine performances, Joseph Brooks abruptly closed the show on April 15, the same day he informed the press and cast.

It would be Love’s last Broadway role for five years, as he focused increasingly on film. Released in September 1916, Friday the 13th starred Robert Warwick. It was directed by French cinema pioneer Emile Chautard; boasted a screenplay by Frances Marion, one of the most influential women in early American film; and was distributed by the World Film Corporation, for whom Love would play the title role in Rasputin: The Black Monk (1917.)

On October 31, Jeanne Eagels signed a contract with World Pictures-Brady to film The Cross Bearer, opposite Montagu Love in the contemporary tale of Cardinal Mercier, who had protected his church and townspeople when the German army invaded the Belgian city of Leuven. Ten years younger than Love, Jeanne played the Cardinal’s young ward. It was directed by Emile Chautard’s protégé, George Archainbaud.

Before its official release in April 1918, The Cross Bearer was given a four-day run at Carnegie Hall to raise funds for the Red Cross. Tickets were priced at 50¢ to $1, with box seats at $10 each. The film was even endorsed by the King of Belgium. “An altogether exceptional, extraordinary picture,” the Hattiesburg American raved. “Love’s Cardinal is quite the best he has contributed to the screen and Jeanne Eagels is charming as Liane de Merode.” Sadly, The Cross Bearer is now believed lost. 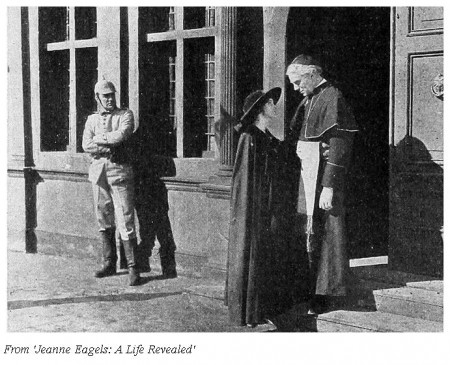 Jeanne Eagels With Montagu Love in ‘The Cross Bearer’ (1918)

Love’s final role for World Film was in The Steel King (1919.) The company ceased production in 1921. Five years later, Love appeared in The Son of the Sheik, starring Rudolph Valentine, and opposite John Barrymore in Don Juan. He often played villainous roles, as in The Haunted House, a 1928 comedy starring Thelma Todd, and the 1929 horror film, The Last Warning. He starred opposite Lillian Gish in The Wind (1928.)

In February 1928, Love divorced his wife of twenty years, marrying Marjorie Hollis in March 1929. In The Constant Wife, a 1929 adaptation of W. Somerset Maugham’s play, Love starred opposite Ruth Chatterton. Based on Jules Verne’s novel, The Mysterious Island (1929) was filmed at the MGM lot in Los Angeles. As the film industry moved West, Love followed, making sporadic appearances on Broadway until 1934.

Love’s clipped British accent complemented his overbearing appearance, and he made the transition to sound with ease. His first talking picture was Bulldog Drummond, starring Ronald Colman. Jeanne Eagels was among those who attended the May 5 premiere at New York’s Apollo Theatre. She died nearly five months later, aged thirty-nine.

His long association with Warner Brothers began in 1930. Many of his subsequent roles were glorified bit parts, adding prestige to each picture. His characterisations were now more sympathetic, and he was often cast as historical figures – such as Thomas Jefferson in Alexander Hamilton (1931), William Gladstone in Parnell (1937), and Henry VIII in The Prince and the Pauper (1937), alongside fellow Englishman George Arliss.

In 1932, Love appeared in a modern-day version of William Thackeray’s Vanity Fair (also known as Indecent), starring Myrna Loy. Limehouse Blues, a 1934 crime drama starring George Raft, was set in Love’s native England, while London by Night (1937) was a mystery set against the backdrop of the newspaper industry, where he had started his career.

As a new decade dawned, Love remained prolific, acting in films like The Sea Hawk, All This and Heaven Too, and The Mark of Zorro (1940.) He appeared in the 1941 comedy, The Devil and Miss Jones, and played George Washington in The Remarkable Andrew (1942.) His final role, as the Reverend Patrick Brontë in the literary biopic, Devotion (his 179th film), would not see the light of day until 1946.

One of Hollywood’s greatest character actors, Montagu Love died, aged sixty-six, at his Beverly Hills home on May 17, 1943.