Next up in the series profiling key figures in Jeanne Eagels: A Life Revealed is Fredric March. One of Hollywood’s most versatile actors, his career spanned six decades.

Ernest Frederick McIntyre Bickel was born in Racine, Wisconsin, on August 31, 1897. His mother was a schoolteacher, and his father a Presbyterian church elder. After studying at the University of Wisconsin, he became a banker, but an emergency appendectomy made him think again, and in 1924, he made his Broadway debut under the name of Fredric March. In 1927, he married actress Florence Eldridge, and they later adopted two children.

By the late 1920s, Fredric was a leading man at Paramount Pictures, romancing ‘It Girl’ Clara Bow in her first talkie, Dorothy Arzner’s The Wild Party (1929.) In April that year, he worked with the most celebrated actress of the stage, Jeanne Eagels, in her final film, Jealousy. He was a last-minute replacement for Anthony Bushell, after studio executives found the Englishman’s work unsatisfactory. 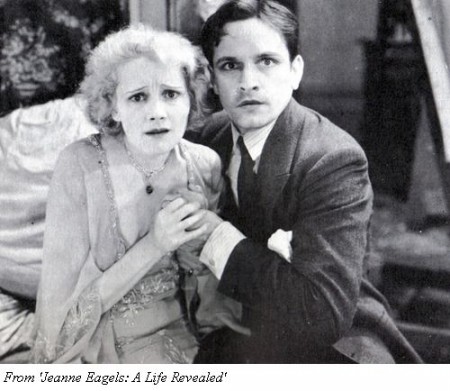 Jeanne Eagels with Fredric March in her final movie, ‘Jealousy’ (1929)

Jealousy was based on a play by Louis Verneuil, and had been staged at the Maxine Elliott Theatre in 1928, with Fay Bainter. In the movie, Jeanne Eagels played Valerie, a Parisian boutique owner and wife of Pierre, a poor and temperamental artist. Envious of Valerie’s warm relationship with former lover Rigaud, Pierre is furious when, in good faith, Rigaud lends Valerie money to open a dress shop. Discovering Valerie in Rigaud’s apartment, Pierre assumes the worst and kills his supposed rival. When another man is accused of the murder, Pierre does nothing. The truth is finally uncovered in an overwrought courtroom finale, with Pierre confessing his crime and accepting his fate.

Fredric March was cast as Pierre, with Halliwell Hobbes playing his rival. Jeanne became ill during filming, and found the film-making process exhausting. “Jeanne Eagels was great,” March recalled, “but the film we made together was a stinker.” Unfortunately, the movie is now believed lost.

Jealousy was released on September 16, 1929, to mediocre reviews. Paramount had heavily promoted the film with full-page advertisements, some in full colour, published in fan and industry publications. “Jeanne Eagels makes it more important than it really is,” was one critic’s verdict, but another cited Fredric March’s performance as “the more convincing of the two.” 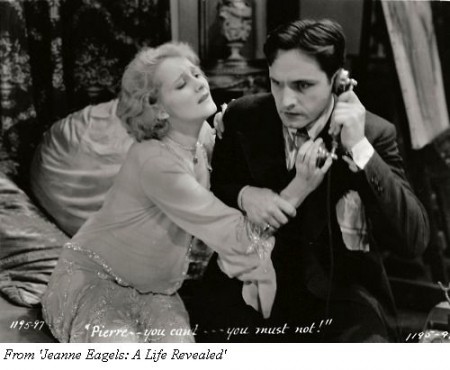 Eagels began making another film for Paramount, but had to be replaced due to poor health. On October 3, she died. While her body lay in state at Campbell Funeral Home at 66th Street and Broadway, across the street, business was quite brisk at the Loew’s Lincoln Square Theater, where large posters proclaimed “Jeanne Eagels in Jealousy, her latest all-talking motion picture!”

In 1930, Fredric won his first Oscar nomination for The Royal Family of Broadway, a comedy in which he played a character based on John Barrymore. He would win in 1932 for Dr Jekyll and Mr Hyde, sharing the honour with The Champ’s Wallace Beery.

One of the screen’s most versatile actors, Fredric proved equally adept as a leading man or in character parts, and resisted signing long-term contracts with any studio. He worked again with Hollywood’s only female director, Dorothy Arzner, in Merrily We Go to Hell (1932), and appeared in Ernst Lubitsch’s classic comedy, Design for Living (1933.) He played the poet Robert Browning in The Barretts of Wimpole Street (1934); Death, in 1934’s Death Takes a Holiday; Vronsky, in the 1935 adaptation Anna Karenina, with Greta Garbo; and Jean Valjean in Les Misérables (1935.)

In John Ford’s Mary of Scotland (1936), starring Katherine Hepburn as Mary and Fredric as the Earl of Bothwell, his wife, Florence Eldridge, played Queen Elizabeth I. In 1937, Fredric played Norman Maine in the first version of A Star is Born, and sparred with Carole Lombard in Nothing Sacred.

His career continued to flourish during World War II, as he co-starred with Veronica Lake in I Married a Witch (1942), and played the titular hero in The Adventures of Mark Twain (1944.) He won his second Oscar for The Best Years of Our Lives (1946.)

At the same time, he continued to work on the stage, playing Mr Antrobus in Thornton Wilder’s The Skin of Our Teeth (1942.) In 1947, he won a Tony award for Years Ago. Playwright Arthur Miller, who owned a Connecticut farm neighbouring Fredric’s, wanted him to play Willy Loman in Death of a Salesman. March declined, and the part went to Lee J. Cobb, but Fredric would star in the 1951 movie of Miller’s masterpiece.

That year, he also starred in Miller’s adaptation of the classic Henrik Ibsen play, An Enemy of the People. During the next decade, Fredric worked in television, and starred in movies including The Bridges of Toko-Ri (1953), and The Desperate Hours (1955), and Inherit the Wind (1960), as well as a Broadway revival of Eugene O’Neill’s Long Day’s Journey into Night, winning a second Tony award.

In 1961, Fredric March was cast as Reverend Davidson in a television remake of Rain, with Marilyn Monroe to follow in the footsteps of Jeanne Eagels in her greatest Broadway success, as Sadie Thompson. Unfortunately, the project never came to fruition. Fredric’s career continued apace in films such as Seven Days in May (1964), and Hombre (1967), a revisionist Western starring Paul Newman.

Fredric underwent surgery for prostrate cancer in 1970, but recovered well enough to play barman Harry Hope in his final movie, a 1973 adaptation of O’Neill’s The Iceman Cometh. He died from cancer on April 14, 1975, aged seventy-seven. His wife of almost fifty years, Florence Eldridge, passed away in 1988.