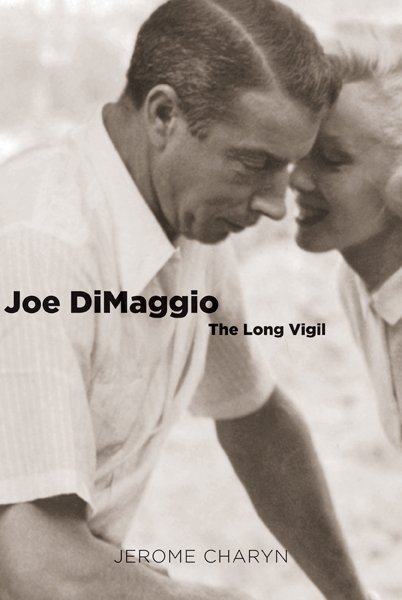 Last November, Morris Engelberg – former lawyer and executor of Joe DiMaggio’s estate – objected to a new biography of the baseball legend, or more precisely, its cover – a photo of DiMaggio with his second wife, Marilyn Monroe, taken by John Vachon in 1953.

‘It’s in poor taste with anybody who knows anything about Joe DiMaggio,’ Engelberg told the Yale Daily News. ‘It’s a cheap shot to sell books. I have no objection to what they use inside the book, but a cover of Joe and Marilyn is a cheap shot,’ Engelberg added. ‘There’s no class. It’s a lack of respect and just shows that the author has no knowledge of the real Joe DiMaggio.’

Professor Daniel J. Kevles – who specialises in intellectual property law – conceded, ‘I can understand [his] point because inside the book, the photo is simply Joe and Marilyn as just another feature or element in Joe’s life. One among many. To put it on the cover is to imply that Joe’s life was defined by his marriage to Marilyn.’

However, that photo only heightened interest in Jerome Charyn’s Joe DiMaggio: The Long Vigil, published in early 2011. It is part of Yale’s ‘Icons of America’ series, which includes works by film critic Molly Haskell on Gone With the Wind, and Gore Vidal’s take on the founding fathers, Inventing a Nation.

Jerome Charyn has published over fifty books in a variety of genres. His most recent works include Marilyn: The Last Goddess, an introduction to Monroe’s life and movies, published in 2008.

‘How can I ever explain the old Yankee Stadium to anyone who hasn’t grown up in the Bronx?’ Charyn asks. By recalling his youth as a baseball fan in DiMaggio’s heyday, he brings a personal touch to The Long Vigil. Born in 1914, Joseph Paul DiMaggio was the eighth of nine children born into an Italian immigrant family. His father was a fisherman at San Francisco Bay, and Joe ‘taught himself to bat with a broken oar’.

DiMaggio was one of those rare sportsmen who inspired devotion from his fans. Unlike Babe Ruth, who preceded him, Joe was deeply reserved. Young fans like Jerome, who waited for DiMaggio outside the stadium, were seldom granted so much as a wave.

Joe’s quiet dignity captured the mood of 1930s America, near the end of the Great Depression and on the brink of war. Married with a baby son, he was reluctant to enlist. His discomfort in the military was, in many ways, a dry run for the humiliating aimlessness of retirement.

Ernest Hemingway paid tribute to Joe in his 1952 novella, The Old Man and the Sea. ‘But I must have the confidence and I must be worthy of the great DiMaggio who does all things perfectly even with the pain of the bone spur in his heel,’ says the fisherman. Referring to DiMaggio’s struggle with injury, Charyn crowns him ‘our suffering hero.’

Like Marilyn, Joe seemed to epitomize the American Dream: a poor boy who had achieved greatness through natural talent. As with Marilyn, Joe’s humble origins were both praised and mocked. He was routinely described as a ‘Dago’ and a ‘Wop’. His own parents were among the millions of immigrants classified as ‘enemy aliens’ by the government after Japan’s attack on Pearl Harbour.

However, Joe’s experience of prejudice was slight in comparison to the many black baseball players who were excluded from the mainstream. Though Jackie Robinson is renowned as the first black player to join the Major League (in 1947), Joshua Gibson dominated the Negro Leagues from the late 1930s. As Charyn relates, Gibson’s career ended all too soon. After suffering a brain tumour in 1943, he died, aged 35, four years later. In his final months, Gibson was confined to a wheelchair and could often be heard muttering to himself, ‘Hey, Joe DiMaggio, it’s me, you know me. Why don’t you answer me?’

Even if he had been there to listen, it’s unlikely that the uncommunicative DiMaggio could have reassured Gibson. Charyn describes Joe as ‘a narrow man’, for whom life without baseball was unthinkable. DiMaggio spent much of his free time as a ‘magnificent hermit’ at Toots Shor’s Restaurant on 51st St West.

Marilyn met Joe in early 1952, on a ‘blind date’ arranged by a mutual friend in Los Angeles. DiMaggio, newly retired, was attempting a second career as a television pundit. Monroe – who, at 25, was twelve years his junior – was on the brink of stardom. Unimpressed by sportsmen, Marilyn had expected DiMaggio to be ‘flashy’. She was surprised to find him rather introspective, like herself. Though not a conventionally handsome man, Joe was smartly dressed and, Marilyn noted, physically imposing.

His attraction to Monroe was more than sexual. ‘Everyone talks about how beautiful Marilyn Monroe was – and she was,’ Joe told a friend, years later. ‘But people don’t remember my first wife, Dorothy Arnold. She was just as beautiful. I used to run around a lot when I was married to her.’ Hollywood pounced on the budding romance, but DiMaggio was reticent from the start. ‘America’s mythic couple’, as Charyn terms them, were rarely seen in public. They married in March 1954, while Marilyn was on suspension from her studio.

If Joe ever hoped to settle down, he was soon disappointed. Marilyn accompanied him on a visit to Japan, where they were mobbed. She then accepted an invitation to entertain U.S. troops in Korea, and left her hapless husband behind. Monroe revelled in the crowd’s adulation. ‘You never heard such cheering!’ she told Joe. ‘Yes I have,’ he replied. ‘And they can boo as loud as they cheer.’

While some biographers see this exchange as proof of Monroe’s immaturity, Charyn interprets it differently. ‘Marilyn’s words are a rueful reminder of what the Jolter had lost,’ he reflects. ‘But they’re also Marilyn’s subtle war cry, her coming-of-age in regard to Joe.’ The marriage lasted just nine months, but Joe couldn’t let her go. He dated a string of beauty queens, including one winner of a Marilyn Monroe lookalike contest. But none of these relationships ran the distance.

In 1961, Joe rescued Marilyn from a psychiatric hospital. They took a break together in Florida, and rumours of a reunion were rife until Monroe died in 1962. DiMaggio claimed Marilyn’s body and organized her funeral. For twenty years, he sent a dozen red roses to her grave three times weekly. He also bore grudges against those whom he felt he had hurt her – Frank Sinatra, Robert Kennedy.

Charyn subscribes to the theory that Marilyn and Joe were due to remarry, though the evidence is far from conclusive. However, he does not believe Morris Engleberg’s claim that DiMaggio’s dying words were ‘Now I’ll get to see Marilyn’.

‘He was the only man worthy of her,’ Charyn states. Their marriage, troubled from the outset, had collapsed amid defiance on Marilyn’s part, and perhaps violence on Joe’s. Nonetheless, Joe never betrayed his wife: after her death, he turned down countless offers to speak about their relationship. Personal papers, auctioned after Joe’s death, show that he never stopped missing Marilyn, and had tried his best to change – even seeing a psychiatrist. ‘It was a twentieth-century romance, foolish and full of heartbreak,’ Charyn concludes. ‘We remember the way he mourned her while he unraveled.’

Although perceptive about Monroe’s talent, his characterization  of her is closely modeled on that of fellow New York scribes, Norman Mailer and Joyce Carol Oates. He compares Marilyn to the ‘femme fatale’, Rose Loomis, a role she played in the 1953 thriller, Niagara.

‘It’s never the need of money that people do things for,’ DiMaggio told Morris Engelberg. ‘It’s the want of money.’ A shrewd businessman, Joe became the face of Mr. Coffee and a spokesman for the Bowery Savings Bank. However, some commentators felt that Joe’s financial pursuits tarnished his sporting legacy. Engleberg negotiated a bat-signing deal in 1993 that, in Charyn’s words, ‘robbed DiMaggio of that relentless grace he had on the field.’ But Joe’s obsession with money wasn’t a simple case of greed. Charyn suggests that DiMaggio’s enterprises may have helped to mask his essential loneliness and lack of purpose. Born into poverty, he was afraid of returning.

Not all of Joe’s projects were profit-based. He raised $4,000,000 for the Joe DiMaggio Children’s Hospital, which opened in 1992 in his new hometown of Hollywood, Florida.  Sadly, DiMaggio’s relationship with his son, Joe Jr, foundered. Marilyn had been especially close to him as a boy, and they had spoken on the night of her death. ‘She might have provided the glue to reconcile father and son,’ Charyn speculates. ‘Without her Joe was a lone wolf in the wasteland of wherever he happened to be.’

In 2001 – two years after Joe DiMaggio’s death, aged 85 – Richard Ben Cramer published The Hero’s Life, a highly critical biography that chipped away at the reputation of ‘baseball’s first saint’. Charyn declares his intent to restore Joe’s image, with some success – though, as there is little source material here that can’t be found elsewhere, it is largely a matter of interpretation. A wholly revisionist study of DiMaggio has yet to appear.

The ‘long vigil’ of the title refers to the intense focus which Joe gave to his passions: first baseball, then Marilyn. But it also reflects his place in American lore. ‘There was a lament for DiMaggio long before he died,’ Charyn observes, recalling Simon and Garfunkel’s lyric from ‘Mrs Robinson’:

‘Where have you gone, Joe DiMaggio?
A nation turns its lonely eyes to you.
What’s that you say, Mrs. Robinson,
Joltin’ Joe has left and gone away…’