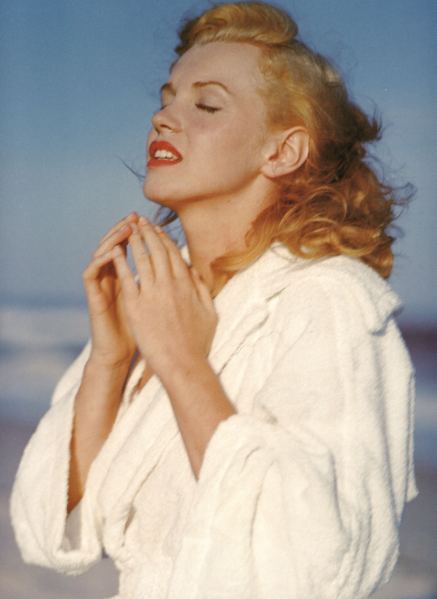 Wednesday, June 1st, marks what would be Marilyn Monroe’s 85th birthday. In her honour, I will be posting new articles daily.

This article is also published at Immortal Marilyn

As an adult, Marilyn Monroe was not particularly religious. But faith influenced her strongly during childhood. Rumour has it that she was baptised in the Foursquare Gospel Church by the flamboyant Aimee Semple McPherson.

For seven years, Norma Jeane was cared for by her grandmother’s neighbours, the Bolenders, in Hawthorne, a small town near Los Angeles. Theirs was a religious household, and as Marilyn later recalled, a pious one. “Nearly everybody I knew talked to me about God. They always warned me not to offend him…”

Speaking to J. Randy Taraborrelli, Nancy Bolender Jeffrey countered, “First of all, we were Baptists. Though I think along the way Mother did belong to a United Pentecostal Church. We went to Sunday school on Sunday mornings and then Wednesday night services. I don’t think that was too much…”

In 1933, Norma Jeane left the Bolender home to live with her mother, Gladys. Gladys’s state of mind was fragile, and biographer Donald Wolfe contends that she turned to Christian Science, “spending long hours at night reading her ‘science’ and the Bible.” Unfortunately, Gladys suffered a nervous breakdown and was committed to a psychiatric hospital. Norma Jeane spent several months in an orphanage while Grace McKee Goddard, a family friend, applied for legal guardianship. However, Grace also had a step-family to care for, and so Norma Jeane continued to move between foster homes. In 1938, shortly before her twelfth birthday, she went to live with Ana Lower, Grace’s 58 year-old aunt, in the nearby Los Angeles suburb of Sawtelle. 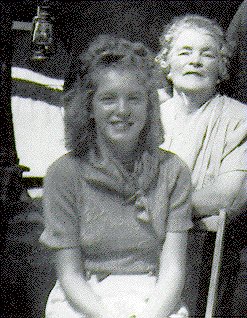 Long since divorced, ‘Aunt Ana’ was a devout Christian Scientist. She lived in one of several modest properties left to her by her former husband, and because she had no other job, was permitted to take fee-paying clients as one of the Church’s qualified ‘healing practitioners’.

“She was very religious,” Eleanor Goddard recalled, “but not a fanatic. In fact she was very sensible, compassionate and accepting of others. She looked severe and had an imposing carriage, but she was putty inside, not the domineering matron she was often made out to be.”

Christian Science was founded by Mary Baker Eddy in Boston, 1879. Her most influential book, Science and Health with Key to the Scriptures, was passed down by Ana to Norma Jeane. In Christian Science, sin, suffering and death are merely delusions which can be overcome through prayer. “Christian Science does not share American fundamentalism’s contempt for the world and the flesh,” Donald Spoto commented, adding, “recreation and entertainment are not forbidden, nor is the religion hostile to education, medical studies excepted.” This exception would prove difficult for Norma Jeane to live by as she began her teenage years. Severe menstrual cramps often left her in excruciating pain, and she would later be diagnosed with endometriosis.

While some of Marilyn’s youthful memories were bittersweet, she had nothing but praise for Ana. “There was real contact between us because she understood me somehow,” she told George Belmont in 1960. “She knew what it was like to be young. And I loved her dearly.” “Affectionate by nature and deprived of love for so long, Norma Jean responded to that creed’s ethic – Love as God and the underlying principle of the universe – with blind enthusiasm,” Fred Lawrence Guiles wrote in 1969. “She was to remain a faithful member of that church for over eight years, the only really solid religious connection of her life.”

However, Donald Spoto has argued that “Ana Lower gently but somewhat simplistically guided Norma Jeane to see that only what was in the mind was real, and the mind could be uplifted. But the girl had already long sought refuge from insecurity in unreal movie images…” In other words, Spoto believed that Christian Science led Marilyn to expect nothing less than perfection, of herself and others, and that the inevitable failure to match up to her own ideal would be too hard for her to bear.

Within two years, Ana had contracted heart disease and was unable to care for Norma Jeane. She returned to the Goddard house in nearby Van Nuys and bonded with Eleanor, who was close to her in age. Then in 1942, shortly after her sixteenth birthday, Norma Jeane married the ‘boy next door’, Jim Dougherty. Early in their marriage, the Doughertys attended the Sherman Oaks Christian Science Church.

Norma Jeane told her half-sister, Bernice Miracle, that she struggled with one aspect of her faith. “I take prescriptions, stuff for cramps. I did better when I lived with Aunt Ana before I married Jimmy. But she still helps me. I probably have too much on my mind now.” Ana’s guiding hand is evident in a letter sent to Norma Jeane, while visiting Berniece in 1944. “God does not cease to be because you board a train,” Ana wrote, referring to Norma Jeane’s travel sickness, “nor do you cease to be His perfect child because you take a car ride or a ship ride.”

Andre De Dienes, one of the first photographers to work with Norma Jeane, wrote of a discussion they had during a modelling assignment in 1945. “I was reading to her from a quotation book I had brought along with quotations about most everything that touches spiritual life. Norma Jeane listened attentively, and then she took from her handbag her Christian Science prayer book and she, too, read for me.”

As her first marriage came to an end, Norma Jeane moved back into Ana’s house. In 1946, shortly before signing her first movie contract as Marilyn Monroe, her mother, Gladys, re-entered her life. Gladys shared a room with Marilyn, but there were problems from the outset. She did not approve of her daughter’s career, and seemed “obsessed” with Christian Science. She wore a nurse’s uniform and wanted to heal people without medicine, but could barely take care of herself.

“Ana is immensely likable, nearly irresistible as a witness for the faith,” Bernice Miracle observed. “She doesn’t preach; she simply radiates good nature and optimism.” By accompanying Gladys to church services and in her studies, Ana slowly gained her trust. Ana also encouraged Marilyn to pursue her goals. “Aunt Ana was sure – surer than I am now – that I was right in my ambition to be an actress,” she told a friend later. However, Marilyn kept some details to herself. “I’m not ashamed,” she said to Bernice after posing nude for the first time. “But I don’t want Ana to know. She wouldn’t approve.” 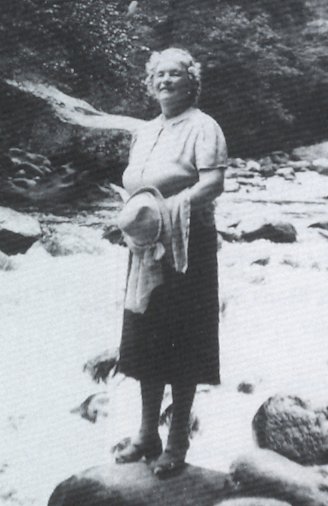 Ana’s death in 1948 was a terrible blow to Marilyn. “She was a wonderful human being,” she told Maurice Zolotow. “I once wrote a poem…about how I felt when she died. She was the only one who loved me and understood me. She showed me the path to the higher things of life…”

After losing Ana, Marilyn’s interest in Christian Science seemed to subside, but she soon developed an insatiable curiosity and desire to learn, through reading, method acting and psychoanalysis. Over time, however, Gladys’s religious fixation became a source of anxiety. In 1953, Marilyn arranged for her to live at the Rockhaven sanatorium in California. “Gladys has been officially diagnosed as a paranoid schizophrenic, one who suffers delusions of persecution,” Bernice Miracle stated. “The Christian Science precept against the use of medicines feeds Gladys’s paranoia: she believes the doctors are trying to poison the patients.”

“Marilyn’s mother was overly taken up with her religion, Christian Science,” claimed Inez Melson, Gladys’s legal guardian. “That was her area of disturbance. She figured she had done something wrong in her life, and was being punished for it.” This crippling sense of guilt was increasingly projected onto her daughter, now one of Hollywood’s most sought-after stars. On the same day that Gladys was transferred to Rockhaven, Marilyn accepted an award from Photoplay magazine as Best Newcomer.

The tight, gold lamé dress that she wore to the ceremony has become part of the Monroe legend. Barbara Leaming has speculated that Marilyn’s brazen public persona was, at heart, a kind of unconscious rebellion. “The rantings of her mother…had inculculated in her a core belief that sex was dirty and bad. Marilyn’s discovery of ‘the girl’ was fuelled by her own need to contend with that past and all it had taught her. It allowed her to proclaim that, far from being the doomed sinner Gladys branded her as, she was actually a sweet, innocent girl whom everyone should love.”

In years to come, as her life grew ever more troubled, Marilyn became addicted to painkillers, sleeping pills to combat her insomnia, and alcohol. Some biographers think that Christian Science could have ‘saved’ Marilyn, but this may be wishful thinking. “It is difficult to say whether the Church failed her or if she, in the end, could not bring to it the necessary belief,” Guiles has admitted. “When in the last decade of her life she most needed the relief Science is supposed to bring, she had long since abandoned it…What is regrettable is that Ana Lower’s Church could not have remained the anodyne for Marilyn, for in a very real sense, she was to be destroyed by her belief in and reliance upon drugs and medications.”

However, Aunt Ana’s teachings were seldom far from Marilyn’s mind, and Maurice Zolotow has suggested that it was because of her influence that Marilyn was able to develop the imaginative skills she needed in her chosen profession, and to cope with the harsh realities of life.

“To anybody for whom the ‘hysterical’ way of life has become the most practical method of surviving in a hostile environment, the tenets of Christian Science are, if not always efficient in curing disease, useful in other ways,” Zolotow wrote. “The ‘hysteric’ tends to think that external reality is what he makes it in his mind…An actress can manage without sensitivity, without beauty, without a commanding voice – but she cannot communicate imaginary experiences to us without the ‘hysterical’ gift.” (Zolotow added that by ‘hysterical’, he did not mean to imply that Marilyn was out of control.)

Fred Lawrence Guiles expanded upon this theory. “Perhaps the significant heritage of Norma Jean’s years with Science was her lifelong ability to seem innocent,” he judged, “to appear never to see evil in anything…This quality was basic to her screen image and, as we can see from its background, there was nothing false about it.”

After Marilyn’s death from an overdose in 1962, Gladys wrote to Inez Melson, “She is at peace and at rest now and may our God bless her and help her always. I wish you to know that I gave her (Norma) Christian Science treatments for approximately a year; wanted her to be happy and joyous.”