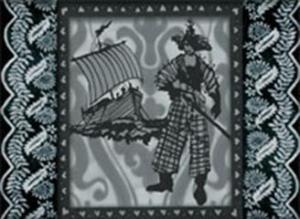 Grace O’Malley (Gráinne Ní Mháille) was born in Mayo circa 1530, daughter of a chieftain. She became Ireland’s most renowned sea-raider, and her battles with Sir Richard Bingham, the Governor of Connacht, are the stuff of legend. In 1593, when English colonisation was at its peak, Grace famously negotiated with Elizabeth I at Greenwich Palace. The life of Ireland’s ‘pirate queen’ has long been celebrated in folklore, literature and song. Most recently the poet Naomi Foyle has composed an ‘epic ballad’, Grace of the Gamblers: a Chantilly Chantey.

The ‘urban broadsheet’ ballads that Foyle evokes were an offshoot of print’s invention, and the growth of literacy during the 16th century. Printed on one side of a sheet of paper, and scrolled or folded into ‘chapbooks’, ballads sold well at markets and fairs. Popular subjects included love, religion, revelry, myths, crime, politics, war, disasters and miracles. Ballads were often set to music.

Grace of the Gamblers begins with a call to the ‘young ladies of Mayo’, and the intricate weavings of narrative seem to mimic the lacemaker’s craft. Of course, Grace O’Malley, while of noble blood, was far from a ‘lady’ by the conventions of her time, or indeed ours. As a young girl, she cropped her hair and sailed to Spain with her father. As a young widow and mother of three, she married again but separated from her second husband after giving him a son, and claimed his ancestral home at Rockfleet Castle, overlooking Clare Island, for her own.

But history has recognised ‘Grace’ (more likely known as ‘Grania’) as a revolutionary and a woman ahead of her time. Unafraid of lone combat, O’Malley was a supreme commander of men and her long career, while undoubtedly fought against the odds, was unhindered by mutiny. If some of Grania’s exploits have been spun into fable, the facts of her life are quite well-documented. In the last decade alone, two new biographies have been published (one by Anne Chambers, and another by Judith Cook.)

This epic ballad can be read in one sitting, but its fierce beauty will inspire a second glance. By using Irish slang and dialect, Naomi Foyle ensures that we don’t just sense the past vicariously, but truly feel the spirit of O’Malley’s wild times as she lived them. Foyle is a Brighton-based poet and tarot reader, currently studying towards a doctorate in Creative Writing. Previous collections include The Night Pavilion (2008), and a third book, The World Cup, will be released in June. She is published by Waterloo Press, and all titles can be ordered direct through their website.

Grace of the Gamblers includes a number of stark, detailed ink drawings by Peter Griffiths. In March 2010, Foyle performed her epic ballad at the Iambic Arts Theatre, accompanied by fellow authors Bernadette Cremin and Bridget Whelan, and with music from Aughisky and The Celtic Tigrrs. Boasting a compelling story and heroine, with singsong rhymes and rousing, lusty refrains, Grace of the Gamblers is a vital, exhilarating work, befitting a woman’s adventure that demands to be retold.