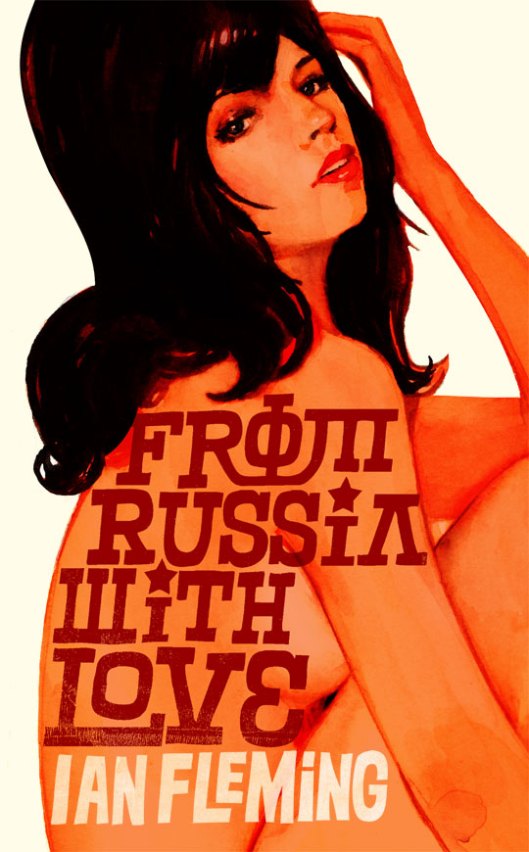 ‘City Reads’ is an annual event in Brighton and Hove, beginning on World Book Day in March and concluding during the Brighton Festival in May. Each year one book is chosen, to be read and discussed by the whole community over three months. Since 2005, a variety of texts from Lewis Carroll’s classic fantasy, Alice in Wonderland, to contemporary novels such as The Book Thief by Marcus Zusack have been selected.

This year’s read is From Russia With Love, the fifth of Ian Fleming’s thrillers featuring the dashing secret agent, James Bond. First published in 1957, it became the second Bond novel to reach the silver screen in 1963, with Sean Connery in the lead role. Personally, I’ve never been much of a Bond fan – his brand of escapism always seemed too ‘macho’ for my taste.

However, From Russia With Love grabbed me instantly. As Wicked Baby, my novella about the Profumo Affair shows, I’ve long been fascinated by the Cold War era and the cultural revolution in British society during the 1950s and 60s. Also, I’m quite a fan of Eastern European literature and history – even living in Prague for a while during the late 1990s. Finally, I had never read anything by Ian Fleming, one of the spy genre’s masters.

The first hundred pages are devoted to the ‘Russian’ characters (including a torturer, Rosa Klebb, and Northern Irish defector and assassin, ‘Red’ Grant.) It’s a risky strategy, as none of these protagonists are remotely sympathetic, except for Tatiana Romanovna, the young woman planted as a ‘honeytrap’ for Bond.

When Bond finally appears, and boards the Orient Express with Tatiana, the fun really begins. Before that, there’s a brief sojourn in Istanbul where Bond befriends another agent, the ludicrously named Darko Kerim. Fleming’s class and racial stereotyping is hardly subtle; Turks are portrayed as lusty and violent, Soviets cold and ruthless (apart from Tatiana, of course, whose surname implies an imperial heritage), while the Brits are, largely, honourable and intelligent.

Modern readers will also notice Fleming’s rather Neanderthal attitudes to women – in Kerim’s view, all women want to be ravished, and while Bond is more gallant, he more than once describes Tatiana as ‘silly’. The two female protagonists, Tatiana and Rosa, are polar opposites – Tatiana is sweet and pliant, while Rosa Klebb, head executioner, is a monstrous parody.

Fortunately, Fleming’s skilful, punchy prose ensures that for all its dubious overtones, From Russia With Love is nonetheless a highly entertaining read. In fact, one does not need to agree with Fleming’s prejudices to appreciate how well he captures the reader’s imagination. It is an artful work in many ways but it should not be taken too seriously, and its flaws reflect the time in which it was written. (The novels were praised by John F. Kennedy, further increasing their popularity.)

Of all the Bond films, From Russia, With Love is, to my mind, the best by far – and I especially liked Lotte Lenya’s performance as the diabolical Rosa Klebb. Additionally, I greatly admire British crooner Matt Monro’s version of the title song, written by Lionel Bart and arranged by the accomplished John Barry. In 1997, another Bond composer, David Arnold, produced Shaken and Stirred, an album of reworked Bond themes, including a cover of ‘From Russia, With Love’ by Natacha Atlas.

My copy of the novel was reissued by Penguin in 2009, with a seductive cover illustration by Michael Gillette. He evokes the ‘pulp fiction’ aesthetic and seamy allure of the Bond series wonderfully. It is just the latest of many interpretations – the artwork from a 2002 edition shows ‘Tatiana’ in black stockings and not much else, as she appeared in her first encounter with Bond.

This year’s ‘City Reads’ is now well underway, and upcoming events include ‘Spies on Screen’, a series of free films to be shown at Brighton’s Jubilee Library, and a screening of From Russia With Love at the Duke of York’s Cinema; a ‘Write a Thriller in a Day’ workshop with novelist Sue Walker; ‘Sex, Snobbery and Sadism’, a discussion of the Bond controversies at Waterstone’s, by the Clocktower; readings, book club sessions and a quiz; talks by contemporary spy authors, including Christopher Andrew (Defence of the Realm) and Sir Christopher Meyer, former British ambassador to Washington, at the Corn Exchange.