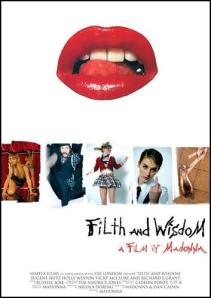 Originally conceived as a short film, Filth and Wisdom was extended into a long feature and first shown at the Berlin Film Festival in 2008. Since then it has had a limited theatrical release, and is now available on DVD in Europe and America (though not, as yet, in the UK) as well as being issued on-demand via cable providers.

It’s unlikely that this low-budget, indie film would have been noticed at all had it not been directed by Madonna. Her star power has proved to be a mixed blessing, generating media interest but also critical scorn. Madonna’s acting career has been chequered, ranging from her award-winning turn in Evita to box-office flops like Swept Away.

By the mid-2000s, Madonna had largely given up on acting. ‘To me,’ the self-confessed ‘control freak’ has reflected, ‘the whole process of being a brush stroke in someone else’s painting is a little difficult.’ Her ex-husband, director Guy Ritchie, also commented, ‘She’s perfectly good…I just don’t think people can get her persona out of the way.’

While her musical evolution is seemingly unstoppable, Madonna’s ventures into other areas – movies, books, and even her charity work – have often been derided, and Filth and Wisdom was no exception. Though many reviews have been negative, her directorial debut has garnered modest praise in some quarters. 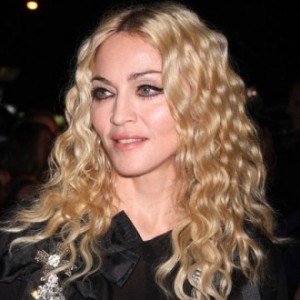 Madonna at the NYC preview of 'Filth and Wisdom', 2008

As well as directing, Madonna co-wrote and produced the film. Therefore it is of interest to longterm fans who accept that her ambitions lie beyond the next album or tour. Certainly it can be called a vanity project but it is also a very personal work.

Set in London where Madonna lived with Guy Ritchie for most of the last decade, the story nonetheless bears many parallels to her days as an aspiring singer and dancer in New York from the late 1970s to the early 80s. It follows three flatmates as they struggle to find a reality to match their dreams.

The star, and narrator, is Eugene Hutz, the charismatic lead singer of Ukrainian gypsy-punk band Gogol Bordello. Though his philosophical asides can be grating, Hutz is a confident, often funny main protagonist.  Fans of Hutz will probably enjoy the film for his performance alone, and Madonna’s decision to use a fiery personality from the music industry – not unlike herself, albeit more underground than mainstream – is a wise choice. 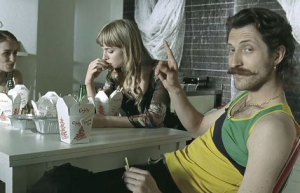 Eugene Hutz in a scene from 'Filth and Wisdom'

Hutz, or ‘A.K.’, works as a male prostitute while waiting for his big break. The beautiful Holly Weston (a model, in her acting debut) plays a ballerina forced to take up pole-dancing to make ends meet. And Juliette (Vicky McClure) has rejected her well-off background to work as a pharmacist, stealing medicines to take to Africa.

Each character seems to represent an aspect of Madonna’s own life, but the comparisons are not too laboured. Richard E. Grant, the best-known of the cast, plays a blind professor suffering from writers’ block. His name, ‘Christopher Flynn’, is also the name of Madonna’s first dancing teacher and mentor.

Music is intrinsic to the film, and Madonna uses it to good effect. Two of her own tracks, ‘Erotica’ and ‘Secret Garden’, feature in the strip club scenes, as well as Britney Spears’ chart-topper, ‘Hit Me Baby One More Time’. The dance sequences are well-choreographed, and Madonna doesn’t dwell on the seediness of her milieu. The club’s owner, played by Stephen Graham, is comically ineffectual – it is Francesca Kingdon, a more experienced pole-dancer, who guides Holly to accept her situation without losing her dignity.

Much is made of life’s ‘duality’, and at times it seems the viewer has unwittingly been enrolled on Kabbalah 101. Without filth, Hutz explains, there is no wisdom – in other words, you cannot reach enlightenment without suffering, and perhaps the two states are not so different after all.

Fortunately, Madonna strikes a balance of making her thematic statement clear while retaining a light touch throughout. Some of the photography is self-consciously ‘arty’, and at times the dialogue is pretentious, but there is also an honesty and good-natured humour about this film which, for the most part, overrides its more obvious flaws.

1 thought on “Filth and Wisdom”