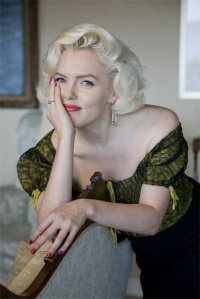 Based on a real-life encounter between Monroe and Fitzgerald, Marilyn And Ella began as a radio play by Bonnie Greer. Exploring issues of racism, sexism and fame, it is essentially a two-hander with music made popular by the respective stars during the swing era. Marilyn is played by Suzie Kennedy and Ella by Hope Augustus.

Meanwhile at the Leicester Square Theatre, Marilyn: Forever Blonde is showing until November 18th. This is a one-woman show starring Sunny Thompson as Monroe near the end of her life, and also includes music. The play is based on Marilyn’s own words and has won several awards during its long international run. Here in Britain, Sunny has garnered rave reviews from the Loving Marilyn website and blogger Mrs Trefusis.

I previously reviewed Marilyn And Ella in 2008, but I understand that it has undergone a few changes since then. Suzie Kennedy is a gifted impersonator and also stars in the forthcoming film, Io E Marilyn.  I am confident that she can do justice to Marilyn’s memory, and will add reviews of the new production as they appear, right here.