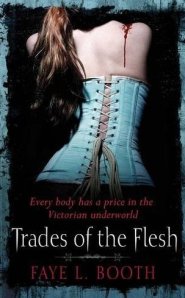 Trades Of The Flesh is Faye L. Booth’s second novel – her first, Cover The Mirrors, was published in 2007. Both books are set in late 19th century Preston, and feature young, working-class women thriving in unconventional ways. Cover The Mirrors’ Molly Pinner worked as a medium, and Trades’ Lydia Ketch is a prostitute. Booth allows readers to reconsider existing views of Victorian morality, and shows how ordinary women negotiated degrees of independence in unlikely settings.

A prologue captures Lydia’s early life and the death of her mother, which left her and a younger sister penniless and led to her employment in an ‘introduction house’. Orphanhood is a staple of that era’s fiction, but Nell’s death scene is more gritty than tragic.  ‘Nell had never been one for sentimentality, nor had Lydia,’ Booth observes, and this sets the tone for her narrative. Lydia is tough and pragmatic, a survivor. Her emotions are revealed less in speech than through her actions.

Preston is Booth’s hometown, and she evokes its past with flair. At the time of the Industrial Revolution, Preston was famous for its textile trade. Dickens’ Hard Times was set in a northern city modelled on Preston, and he used it as a setting for the exploitation of factory workers. But Lydia’s profession is a very different one, on the fringes of respectable society. Institutions like the hospital and workhouse loom threateningly, while neighbouring Lancaster is known mainly for its notorious jail.

For Lydia, prostitution is not a disgrace but a matter of expedience. Streetwalkers operated in more hazardous conditions than in-house whores, and there were few other ways for Lydia to make a living, all precarious. Booth mentions that Lydia had previously sold bootlaces at the railway station, and also describes the dangerous work of mudlarks. Just beyond the comfort of Lydia’s house is the rough life of the town.

As a heroine, Lydia is quick-witted and determined. The other prostitutes are teenage girls like herself, and candid shoptalk brings their world to life. Kathleen Tanner, the ‘abbess’ of the house, is a kind of mother figure, albeit a peculiar one. ‘The abbess was a formidable woman, afraid of no one and ruling her house like a queen,’ Booth writes, ‘but as she sat with the girls in the empty parlour, munching bubble-and-squeak and refilling their cups again and again with coffee, it occurred to Lydia that she had no memories of anything like this with her mother Nell.’

Lydia’s sister, Annabel, chooses a different path – that of education, and a job as governess in a ‘quality’ household. But this does not bring the security she craves. Annabel lacks Lydia’s resilience and her story reflects a sadder aspect of working women’s lives. Booth writes about the supporting characters so well that they almost deserve a book of their own, though ultimately it is Lydia’s restless energy that drives the story.

Prostitution is neither celebrated nor condemned here, but shown for what it really is – work, as routine and monotonous as any other trade. For all her experience, Lydia initially has little notion of sex as pleasure; it is chiefly a means to an end. Booth uses period slang effectively, and adds concrete details like the contraceptive sponges, washed and shared among the girls. ‘Lydia was well-versed in ignoring the men on top of her, underneath her and inside her,’ Booth comments. ‘Having mastered the act, she understood why moneyed folk often compared actresses to whores.’

Lydia’s body is a tool of the trade and perhaps little more until she befriends Henry Shadwell, a young surgeon. Their relationship is not a romantic one in any traditional sense, but it changes Lydia’s life. ‘Nell Ketch would have called him a dandy,’ Booth writes of Henry. ‘This was a man who paid lip service to respectability to heighten the joy of flouting it…’

Although Henry is middle-class, he has a secret life which is anything but bourgeois. He first asks Lydia to pose for nude photographs, then later persuades her to help him and a group of medical students to steal and dissect a corpse. This is shocking even to Lydia. ‘I cut the living for their own good, and the dead for the good of the rest of us,’ Henry explains. ‘How do you think we develop the techniques and cures that heal people and save lives?’ He talks of the barbers and apothecaries he trains to operate illegally, so that the poor who cannot afford doctors can also be treated. Like Lydia, he works outside the law – and arguably, Lydia’s trade is also a necessary evil.

‘I am of the opinion that the female body is certainly capable of receiving pleasure as well as giving it,’ Henry tells Lydia, ‘and that is what I set out to prove.’ The very idea that women could enjoy sex as much as men did was still controversial, and prostitution muddied the waters even further. Whores were believed to be afflicted with ‘an abnormally high carnal urge’, a theory Lydia pours scorn on. But as a consequence of Henry’s ‘experiment’, she enjoys sex on her own terms.

However, Henry is not a straightforward hero, and he readily complies with the hypocrisy of the times. His engagement to a girl from his own class reflects his social aspirations, and he views his sex life with Lydia as entirely separate. Lydia is the more adventurous of the two because she rejects the safety of marriage.  ‘I’m not content, Henry,’ she admits, ‘and I won’t say that I don’t care for you – more than I’d like to, ’specially now. But I don’t think I know how to be a wife.’

One of the most powerful moments in the novel occurs when Lydia learns of Henry’s engagement, and is taken aback by the strength of her feelings. Booth shows Lydia’s agony as she breaks down in public:

‘Her feet were blistered by the time she reached the railway station. As she withdrew from her reverie, the pain in her feet was joined by other sensations – the ragged, blood-flavoured breath of one on the verge of exhaustion, the scratching of the cheap widows’ weeds, and above all, a strange humming all over her body – a threat of an all-consuming pain that threatened to swallow her whole. She sagged against the wall of the railway bridge and spat onto the tracks below. Pulling her purse from her pocket, she wrenched the mourning dress from her shoulders, sending a confetti of little buttons pattering onto the frozen ground. Letting the dress pool at her feet, she stepped out of it and limped down Fishergate, with her cloak pulled tightly around her and her purse clutched in her hand.’

1 thought on “Trades Of The Flesh”