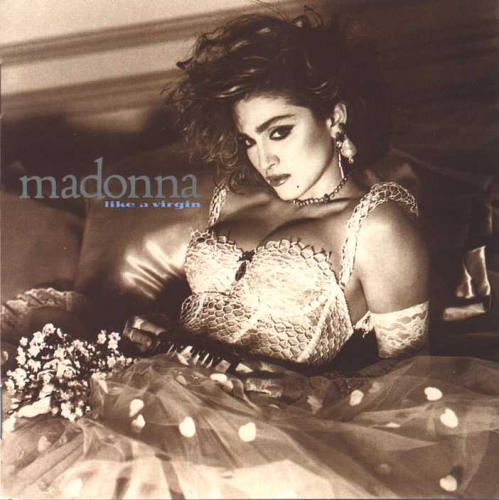 The cover makes it clear – Madonna isn’t just another singer. Steven Meisel’s lush, sepia photography, and the icy stare of his muse, dressed like a punk bride complete with ‘Boy Toy’ belt, suggest an ambitious starlet making a stab at immortality. The inside sleeve shows Madonna in the same white wedding dress, admiring herself in a dressing-room mirror, while the back cover strips her down to just a black slip, sipping coffee on the edge of an unmade bed. 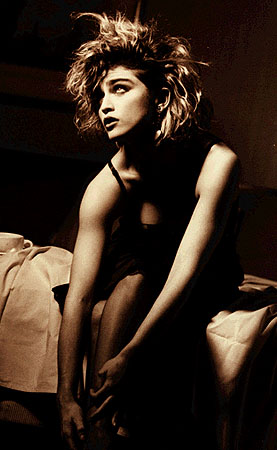 For her second album, Madonna left her dance-diva roots behind and headed straight for the top. She chose a hot-shot producer, Nile Rodgers (ex of Chic, who had recently engineered David Bowie’s comeback with Let’s Dance.) 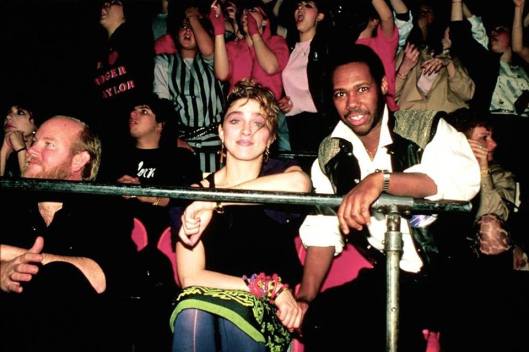 With producer Nile Rodgers at a Duran Duran concert, 1984

From the outset, their collaboration is pure pop. With her squeaky, Betty Boop vocals, Madonna has never sounded more sugary and processed. Her opening gambit, ‘Material Girl’, sung over a military beat, is a tongue-in-cheek ode to the eternal gold-digger. 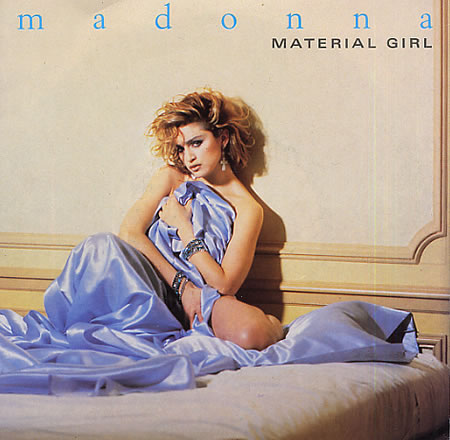 The video, directed by Mary Lambert, recreated Marilyn Monroe’s ‘Diamonds Are A Girl’s Best Friend’ number from the 1953 musical, Gentlemen Prefer Blondes. Madonna aimed to be as famous as her predecessor, but their auras could not be more different. While Monroe had a shimmering, ethereal presence, Madonna’s is hard and glittering – befitting the times perfectly.

While Madonna is still frequently referred to as the Material Girl, the song has been revived infrequently – the last performance was during her 2004 Reinvention Tour.

‘Angel‘, written by Madonna and her college pal, Steve Bray, is a sweet, uplifting love song. Having been performed live only once, it is one of her more neglected hits. The lyrics are simple but beautiful – ‘Walking down a crowded avenue/All the faces seem like nothing next to you/And I can’t hear the traffic rushing by/Just the pounding of my heart and that’s why’. The track fades out with the euphoric phrase, ‘Clouds just disappear…’ 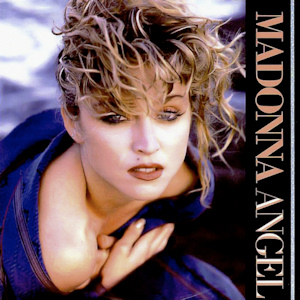 ‘Like A Virgin’, the lead single, follows. Madonna performed it at the first MTV awards ceremony, bursting out of a wedding cake. The song is one big tease, its risque lyrics provoking teen hysteria and parental outrage. It works because Madonna’s delivery is at once bold and childish, speaking directly to a predominantly young audience. She had learned to turn controversy to her advantage, a skill she would never lose. 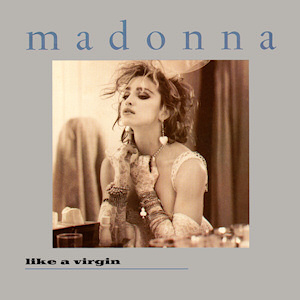 Shot by Mary Lambert in Venice, the video presented Madonna as a ‘knowing virgin’, and showed that she could rival Michael Jackson in spectacle. When performing it during her Virgin Tour in 1985, Madonna asked the audience, ‘Will you marry me?’ Later in the song, she broke into a verse of Jackson’s ‘Billie Jean.’ 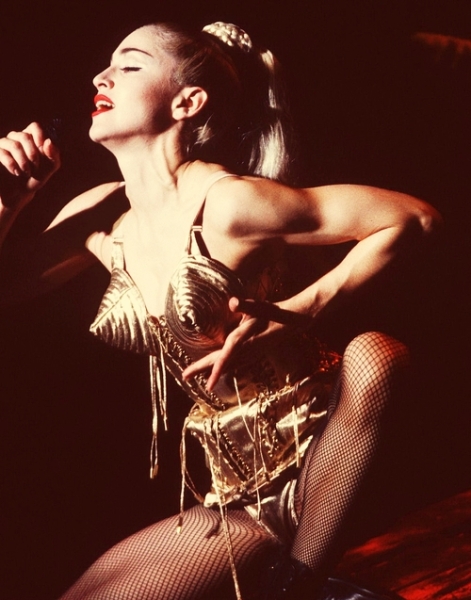 In The Girlie Show (1993), Madonna wore a tuxedo for a Cabaret-style interpretation; ten years later, she performed the song as part of an MTV Awards medley, with Britney Spears playing the bride to her groom. Their Sapphic kiss made headlines throughout the world. For her Confessions Tour in 2006, Madonna sang ‘Like a Virgin’ while riding a carousel horse. And in 2012, she performed a burlesque version of the song for her MDNA Tour.

The cultural impact of ‘Like a Virgin’ was reflected in the opening scene of Quentin Tarantino’s 1992 debut, Reservoir Dogs, in which a criminal gang argues about the song’s meaning. The irony came full circle in 2014, when ‘Like a Virgin’ was recorded by an Italian nun, Sister Cristina, with a video shot in Venice.

‘Over And Over‘ is a light, catchy dance tune, its assertive lyric placing it firmly within the go-getting heyday of the mid-1980s – ‘Got past my first mistake/I’ll only give as much as I can take.’ The album as a whole epitomises that decade which Madonna made her own.

‘Love Don’t Live Here Anymore’ is a cover of a Rose Royce ballad from 1978 (the year Madonna first arrived in New York.) Its theme of rejection and abandonment is one that would often surface in Madonna’s later, more personal work. But the low-key charm of the original does not suit the form of a power ballad, and Madonna seems to be trying too hard to show off her vocal range. A remixed version was released in 1995, to promote her collection of ballads, Something to Remember. 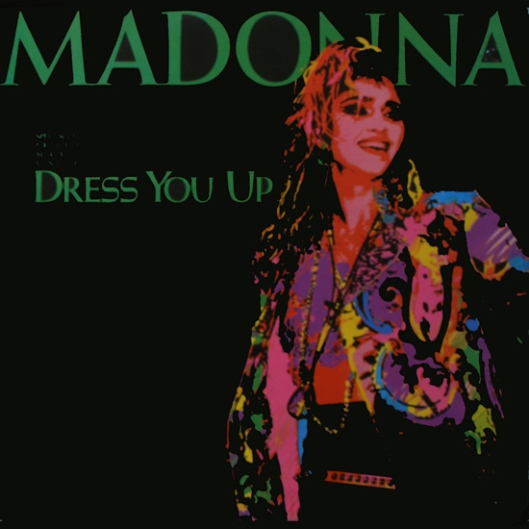 ‘Dress You Up‘ brings back the party mood, and is one of Madonna’s more underrated hits. Like ‘Like A Virgin’ and ‘Material Girl’ it was written by someone else, but looking back, it’s hard to imagine anyone else singing it. It touches on two of Madonna’s favourite things – fashion, and sex. The lyrics are fun and suggestive – ‘Feel the silky touch of my caresses/They will keep you looking so brand new’, taking the raunch of Prince and Girlschool and somehow rendering it wholesome. Madonna revived the song with a guitar-led version of the song on the second leg of her Sticky & Sweet Tour in 2009. 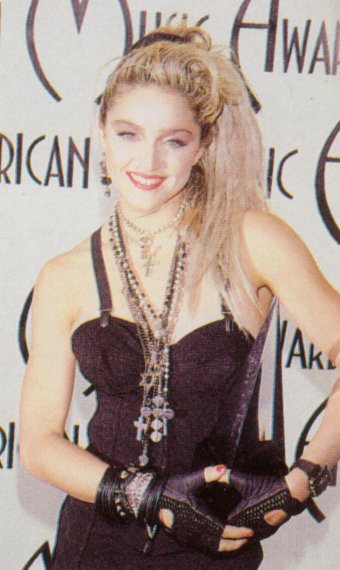 ‘Shoo-Bee-Doo‘ is another ballad, and rather forgettable, but Madonna’s vocals are strong. Once again she shows a softer, romantic side. Then comes ‘Pretender‘, where she explicitly appeals to her female fans: ‘I know that I should take my friends’ advice/But if it happens once, you know it happens twice’. Every schoolgirl will be familiar with her tale of a no-show boyfriend.

The closer, ‘Stay‘, goes one better. It is one of the first songs Madonna wrote, and a demo from 1981, recorded with Steve Bray was included on his (very unofficial) Pre-Madonna album, released in 1997. In 1984, Madonna would follow her stark, obsessive plea, ‘But if you go I’d rather think of dying instead/I never want you to leave’, with a frothy scat fade-out, ‘Then we can sco-sco-sco sco-dely-be-bop, yeah…’ 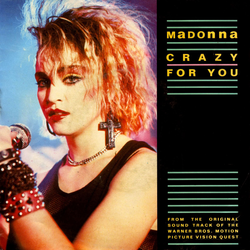 Within months of Like a Virgin‘s release, Madonna became a global phenomenon. In March 1985, her first major movie, Desperately Seeking Susan, was released; in April, she embarked on a two-month American tour; in July, she performed at Live Aid, and married actor Sean Penn. In addition to Like a Virgin‘s success, she released a ballad, ‘Crazy for You‘, and the self-penned ‘Gambler‘, both taken from the soundtrack of teen movie Vision Quest.

Like a Virgin would eventually sell twenty-one million copies, becoming one of the best-selling albums of all time. Madonna would go on to make even better albums, but Like a Virgin marked her ascension to the pop throne – a title she has retained. A remastered version, containing Jellybean’s original 12-inch remixes of the title track and ‘Material Girl’, was released in 2001. 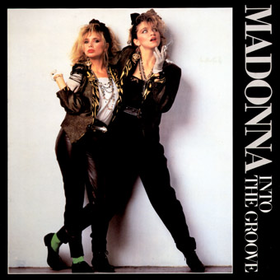 Some later European editions of the album contain an extra track, ‘Into The Groove’. Written and produced by Madonna and Steve Bray, it featured on the soundtrack of her breakthrough movie, Desperately Seeking Susan. The song plays as Madonna mingles at the Danceteria, one of her real-life old haunts. A case of art imitating life, removing the bubblegum veneer that pervades most of Like A Virgin.

An insistent hook and flirtatious, beseeching lyric appeal both to lonely teens and nightclub veterans – ‘Only when I’m dancing can I feel this free/At night I lock the door where no one else can see/I’m tired of dancing here all by myself/Tonight I wanna dance with someone else’. ‘Into The Groove’ became an instant dancefloor classic, and remains so to this day.