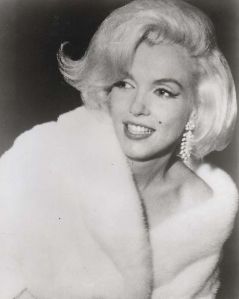 Marilyn Monroe, styled by Kenneth for her appearance at the JFK birthday gala in 1962

Kenneth Battelle, who was dubbed ‘hairdresser to the stars’ during the 1950s, died at home in Wappinger Falls, New York, on May 12th,  2013. END_OF_DOCUMENT_TOKEN_TO_BE_REPLACED

Are You a Jackie or a Marilyn?, Jackie Kennedy, Mad About Marilyn, Marilyn Monroe, Pamela Keogh

My review of Pamela Keogh’s Are You a Jackie or a Marilyn? (first posted here) is reprinted in the latest issue of Mad About Marilyn magazine. Also featured are photographer Bill Carroll; a short story by Michael Williams; a vintage Photoplay article, ‘Orphan in Ermine’, a look back at Marilyn’s ‘night at the circus’ in 1955; and a review of John Vachon’s Lost Look Photos.

If you would like to join the Mad About Marilyn Fan Club, please email Emma: emmadowning@blueyonder.co.uk 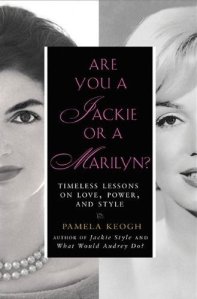 ‘Are you a Jackie or a Marilyn?’ is the question posed in ‘Maidenform’, Season 2, Episode 6 of AMC’s Mad Men. First broadcast in 2008, and set in 1961, the storyline concerns on a proposed advertising campaign for Playtex brassieres. On a drunken night out, the ad-men divide the female characters into two categories: ‘Jackies’ after America’s First Lady, Jacqueline Bouvier Kennedy (later Onassis); and ‘Marilyns’, after Marilyn Monroe.

This episode was the inspiration behind Pamela Keogh’s new book, Are You a Jackie or a Marilyn? Timeless Lessons on Love, Power and Style. Keogh has previously covered other icons of the past, including Elvis Presley and Audrey Hepburn. She has also written about Kennedy in Jackie Style (2001), but this is her first full-length work on Monroe. END_OF_DOCUMENT_TOKEN_TO_BE_REPLACED