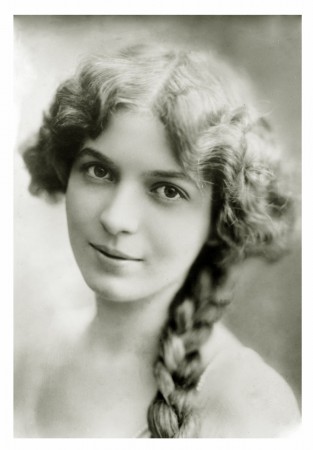 Of Irish descent, Ina Fagan was born in Washington on October 15, 1893. She never knew her father, who had died in a car accident four months previously. With no family breadwinner, Ina and her mother went to live in a boarding-house. From an early age, Ina had a talent for impersonations, and made her vaudeville debut in 1909 as ‘the dainty mimic’, under her mother’s maiden name of Ina Claire.

Her first Broadway appearance was in the chorus of Our Miss Gibbs, running from August-October 1910. She then won a featured role as Molly Pebbleford, the ‘ingénue’ in Jumping Jupiter, a musical comedy starring Richard Carle, which had opened in Chicago in August. From October onwards, the play enjoyed a successful four-month tour of the Midwest, before reaching Broadway in March 1911.

Among Ina’s friends in the chorus was Jeanne Eagels, making her Broadway début. At twenty, Jeanne was three years older than Ina, and had left the Dubinsky Brothers troupe to join the chorus of Jumping Jupiter.

Unfortunately, New Yorkers were less enamoured of the show than provincial audiences, and it closed after just twenty-four performances. While Jeanne was left without a job, Ina Claire had already been offered the lead in another musical, The Quaker Girl, which ran for over a year.

One of Ina’s first fans was a young F. Scott Fitzgerald, who confessed to a ‘melancholy love’ for her. From 1915-16, she performed in Ziegfeld’s Follies, and made her movie debut in Cecil B. DeMille’s The Wild Goose Chase. Then in 1917, Broadway producer David Belasco cast her in a hit comedy, Polly With a Past. She would reprise her role in a 1920 film.

Fund-raising efforts within the theatrical community had increased ten-fold since the United States entered World War I in April 1917. On October 5, nearly 7,000 people gathered at an open-air theatre on Long Island. A series of giant tableaux celebrated great historical achievements of the Allied nations. The French honorarium told the story of Joan of Arc in three scenes. Jeanne appeared as a supporting character when Joan (Ina Claire) was permitted by King Charles (Guy Faviéres) to lead the French army.

A photograph taken during the week of September 23 at the Hippodrome Theatre shows the cast rehearsing in street clothes. The one-night performance was also filmed, and shown in movie theaters around the country. Entitled The National Red Cross Pageant, the film raised thousands of dollars to send overseas. It is now lost, with only a handful of photographs capturing the spectacle.

“This was perhaps the most attractive episode,” Moving Picture World commented in its October 27 review. “The court group was most picturesque, this scene requiring a group of horses, which gave greater realism to the whole. Here were a larger number of talented people than in any other scene.” 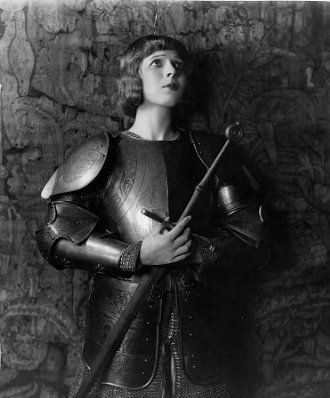 Ina Claire as Joan of Arc

In June 1918, Jeanne joined Belasco’s roster in another hit comedy, Daddies. In October 1919, while starring in another Belasco production, The Gold Diggers, Ina appeared in the All-Star Testimonial Performance, mounted by the Actors Fidelity League at the Century Theatre. Jeanne was among her co-stars. That year, Ina married for the first time, to James Whittaker. They divorced in 1925.

Over the next decade, Ina starred in a series of acclaimed comedies penned by some of the leading playwrights of the era. Bluebeard’s Eighth Wife would be filmed in 1923, with Gloria Swanson taking Ina’s role, and remade by Ernst Lubitsch in 1938. The Awful Truth would also be adapted for the screen, and The Last of Mrs. Cheyney was later remade with Joan Crawford.

In November 1922, Jeanne Eagels began a phenomenal four-year run as Sadie Thompson in Rain, based on W. Somerset Maugham’s short story. Gloria Swanson played the role in a 1928 film, followed by Joan Crawford in 1932. While Jeanne became an overnight sensation, Ina continued to shine in sophisticated comedies, including Maugham’s Our Betters. In January 1923, they performed together in a skit entitled ‘Nothing But Hits’, part of the 41st Annual Actors Fund Benefit at the Century Theatre.

In 1929, Ina reprised her role in The Awful Truth, one of the first sound pictures. Unfortunately, like many early talkies, it was rather static and has been overshadowed by the 1937 remake starring Irene Dunne. Jeanne made her first sound movie, another Maugham vehicle – The Letter. Although William Wyler’s 1940 remake was generally more accomplished, many believe Eagels’ dramatic performance surpassed even that of her successor, Bette Davis.

On October 3rd, a few days after Ina graced the cover of Time magazine, Jeanne died. Earlier that year, Ina had married John Gilbert, Eagels’ leading man in the 1927 film, Man, Woman And Sin. They divorced in 1931.

Like Jeanne, Ina preferred working in the theatre to movies, which she judged ‘a director’s medium.’ She played to her comedic strengths in three successful plays by S.N. Behrman, as well as an adaptation of Anthony Trollope’s Barchester Towers.

But like many of her theatrical peers, Ina also made her mark in Hollywood. In The Royal Family of Broadway (1930), she played a character based on Ethel Barrymore. Her imitation was so deft and funny, in fact, that Barrymore threatened to sue Paramount. In The Greeks Have a Word for Them (1932), an adaptation of Zoe Akins’ play, Ina starred alongside Joan Blondell and Madge Evans. Perhaps her best-known screen role is a rather unsympathetic one, as the Grand Duchess Swana – who vies with a beautiful Russian communist (played by Greta Garbo) for the affections of Count Leon (Melvyn Douglas) – in Lubitsch’s classic 1939 comedy, Ninotchka.

Ina married for the third time that year, to William Rose Wallace Jr. In her final film, Claudia (1943), she played the mother of a young bride (Dorothy McGuire.) She also made a cameo appearance in Stage Door Canteen. She returned to the stage sporadically, playing her last role in T.S. Eliot’s The Confidential Clerk (1954.) In 1960, she was awarded a star on the Hollywood Walk of Fame.

Her husband passed away in 1976, after a marriage lasting nearly forty years. On February 21, 1985, Ina Claire died of a heart attack in San Francisco, aged 92. She was interred at Mount Olivet Cemetery, Salt Lake City.