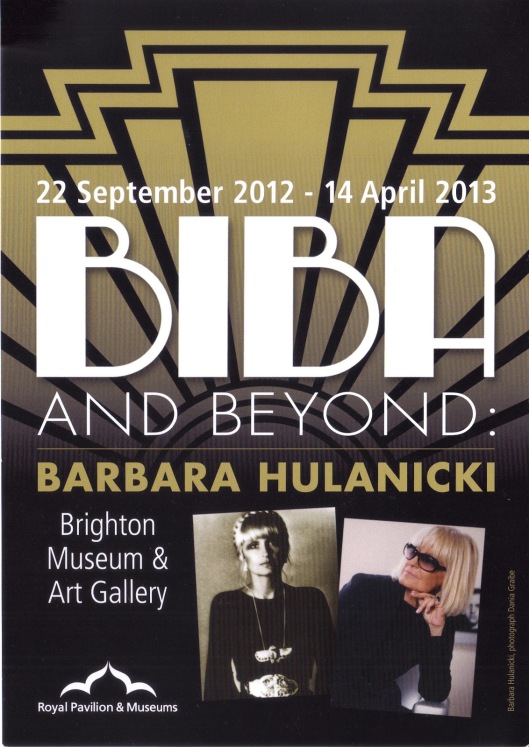 Barbara Hulanicki, the fashion designer who founded Biba, the iconic 60s boutique, spent her formative years in Brighton. She is now the subject of a major retrospective, Biba and Beyond: Barbara Hulanicki, at Brighton Museum and Gallery in the Pavilion Gardens until April 14th.

The exhibition covers three rooms: one focuses on Barbara’s background and influences, a second on the Biba years and finally, her later career. It also includes a number of interactive features.

Barbara was born in Warsaw in 1936. She was living with her parents and younger sister in Palestine when her father, a Polish diplomat, was assassinated, by a Zionist group called the Stern Gang, in Jerusalem, 1948. The Hulanickis moved to England, settling in the Brighton home of Barbara’s aunt, Sophie Gassner. She was a dominant personality and exerted ‘economic and emotional control’ over the family. Nonetheless, Barbara was inspired by Aunt Sophie’s ‘sense of colour, her love of colour, her nostalgia for her glorious youth – if only she had allowed a little freedom of thought!’

Brighton in the 1950s is evoked using family photographs, and colour footage of holidaymakers at the beach, provided by Screen Archive South East. Barbara recalls seeing teenagers dressed flamboyantly in ‘colours that rocked the grey pavements’. After leaving school, Barbara studied fashion illustration at Brighton College of Art. One teacher remembers that her elegant attire contrasted with the beatnik style of her fellow students.

In 1957, Barbara’s beachwear design won an Evening Standard competition, and she moved to London. She was influenced by the film stars of the day, especially Audrey Hepburn. Years later, she met the actress, whom she described as ‘like a fashion drawing brought to life.’ Her gouache sketch of Hepburn, made in 1986, is also displayed. 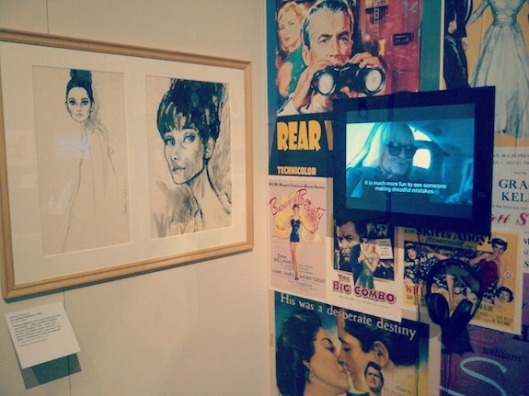 Barbara married Stephen Fitz-Simon in 1961. An account executive, he worked alongside Barbara as her business partner until his death in 1997.

In May 1964, one of Barbara’s designs – a pink, A-line gingham dress with matching scarf, available by mail-order catalogue – was featured in Felicity Green’s fashion page in the Daily Mirror.

The dress sold 17,000 copies, enabling Barbara to open her first shop in Abingdon Road, Kensington. She later added a Brighton branch, at 21 Queen’s Road, near the main railway station, but this was short-lived: the landlady, Barbara explains, was ‘a mobsters’ moll who entertained half the Brighton underworld’.

The ‘Biba’ look was comprised of skinny-fit, sludgy ‘Auntie’ colours – plum, mulberry, green, brown and black. A beauty range soon followed, and Barbara’s black lipstick would be adopted by later generations of punks and goths.

Barbara used models like Maddy Smith, Stephanie Farrow, and Ingrid Boulting, who embodied the ‘Biba dolly’ of her drawings. ‘As time went by, my Biba girl became more dreamy and untouchable,’ Barbara reflects. ‘She was so young and fresh that all of those Auntie colours I had hated when I was younger looked new on her.’ Of the Biba dolly, she observed, ‘Her face was a perfect oval; her lids were heavy with long spiky lashes. She looked sweet but was hard as nails.’

Soon, Biba was frequented by celebrities like Mick Jagger and Marianne Faithfull. Former customers donated their Biba originals for the exhibition, and one room includes a large stage filled by mannequins. Among the many stunning creations are a fake leopard-skin, hooded cloak, as modelled by Twiggy; a dress with a purple, banana-leaf print, inspired by a Victorian pattern book; and my own favourite, a black satin nightdress, worn as an evening gown.

As well as filmed interviews with Barbara, there are also several audio clips of customers and employees recalling Biba in its heyday. This oral history project can be read in full in a series of booklets and ‘memory albums’. The period is also evoked with a Glam Rock soundtrack featuring David Bowie and Roxy Music, as well as older standards like Marilyn Monroe’s ‘I’m Through With Love’.

In 1974, Biba moved into a seven-storey, former Derry & Toms department store on Kensington High Street.  ‘Big Biba’ now offered menswear, toys, home furnishings, and even a food hall with branded tins of baked beans. However, within a year of its opening, Barbara had decided to leave Biba behind. She continued to work in the fashion industry, at one point launching her own label. In 1991, she moved to Miami and restored the Marlin Hotel to its former glory, contributing to the ‘South Beach revival’.

In recent years, Barbara has designed for George at Asda and Top Shop. Supermodel Kate Moss has cited her as ‘my inspiration’, while Twiggy claims, ‘She changed fashion in England single-handedly.’

‘Illustration was the beginning of my career and is the foundation of being able to communicate my ideas,’ Barbara says. ‘So here I am, back to where I started, worrying about all those crooked seams and wobbly hems!’

Biba-inspired designs, created by students at Brighton City College under the ‘Marka’ label, have been produced and sold, with all profits donated to a young person’s charity, Right Here.

The exhibition is accompanied by a range of merchandise, including a graphic novel, In Biba.

3 thoughts on “Biba and Beyond”