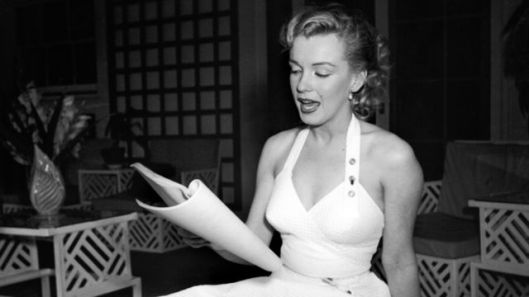 The 50th anniversary of Marilyn Monroe’s death falls this weekend. In tribute, I have reviewed a recent radio documentary, celebrating her beauty, talent and intelligence.

Archive on 4: The Smart Dumb Blonde

Maureen Dowd is a columnist for the New York Times. In a 2010 article, ‘Making Ignorance Chic’, she contrasted Marilyn Monroe’s lifelong quest for self-improvement to Republican politician Sarah Palin’s stubborn anti-intellectualism. Now, as the 50th anniversary of Monroe’s death approaches, Dowd has presented a documentary about her for BBC Radio 4, ‘The Smart Dumb Blonde’. This is part of a long-standing series, Archive on 4, combining library recordings with up-to-date research to bring a unique focus on unexplored areas of politics, entertainment and everyday life.

During her heyday, Marilyn Monroe played the ‘dumb blonde’ better than anyone. In private, however, she read and studied avidly, and longed to be recognised as a great actress. Blondeness has long been a symbol of youth, beauty and fertility. The Virgin Mary and Mary Magdalene have both been painted as blondes, while Elizabeth I is said to have worn a blonde wig while making her famous Tilbury speech. In more recent times, says historian Marina Warner, blondes were favoured by photographers and film-makers because of how well they captured the light (especially in black-and-white cinema.)

Speaking in the 1970s, the critic Charles Marowitz examined the appeal of the dumb blonde. Her naïveté made her more in tune with her animal sensuality, he claimed. An assertive, educated woman could never match her helpless allure to men. In many ways, this comment epitomises the chauvinistic male stance. Another blonde bombshell, Jayne Mansfield, though far from dim-witted, was happy to play along. ‘You’d be smart to take some dumb blonde roles,’ she remarked, ‘but others you can turn down.’

In 1955, Eve Arnold photographed Marilyn Monroe reading James Joyce’s Ulysses. Leon Wieseltier, literary editor of The New Republic, described it as ‘a heartbreaking picture’, adding that ‘the men in her life made her feel that unless she was smart, she wasn’t good enough.’ But Simon Curtis, director of a recent bio-pic, My Week With Marilyn, believes that Monroe’s desire to learn was genuine, and not something imposed on her by others.

She formed an independent production company, and proved herself a fine character actress in Bus Stop (1956) – a performance which Dowd argues deserved an Oscar. In Let’s Make Love (1960), Marilyn plays a showgirl who studies at nightschool. ‘I got tired of being ignorant,’ she tells an admirer. ‘I never knew what people were referring to.’

Monroe’s characters are rarely as dumb as they appear. In The Prince and the Showgirl (1956) she rebuffs the clumsy advances of Sir Laurence Olivier, only to fall for – and seduce – him when his vulnerability is revealed. In Some Like it Hot (1959) Marilyn confides, ‘Men who wear glasses are so much more gentle and sweet and helpless, don’t you think?’ Co-star Jack Lemmon respected her as a ‘gifted comedienne.’

Her acting coach, Lee Strasberg, believed that Monroe was ideally suited to the role of Grushenka in The Brothers Karamazov – a notion much-ridiculed at the time. Arthur Gelb, former editor of the New York Times, met Marilyn at Sardi’s restaurant. ‘She was uncanny when she talked about Dostoyevsky,’ he recalls. He also enjoyed her humour. But he thought that Monroe would never be perceived as a great actress, and this was her tragedy. Fellow Method actress Carroll Baker, the glamorous blonde star of Baby Doll, derided Marilyn’s attempts to change her image, remarking that ‘She wasn’t about to give up being Marilyn Monroe.’

In After the Fall, a play staged in 1964 (two years after Marilyn died), Arthur Miller portrayed their four-year marriage in a less than flattering light. ‘I should have agreed she was a joke,’ he wrote. ‘A beautiful piece trying to take herself seriously. Why did I lie to her?’ Photographer Lawrence Schiller counters that ‘Marilyn was forced to submerge herself in her own myth. She had a big voice and a little voice, but she only ever used her little voice in public. I was of one of those who heard her big voice.’

Actor Alec Baldwin admires the Hollywood women who combined brains with beauty. ‘Women in the 1950s were on the cusp of something,’ he says, speculating that Monroe and her peers were precursors to Jane Fonda and the Women’s Liberation movement of the Sixties. Monroe was confident in her sexuality. ‘We are all born sexual creatures, thank God,’ she told journalist Richard Meryman in her last interview. ‘But it’s a pity so many people despise and crush this natural gift. Art, real art, comes from it, everything.’

‘Blonde hair may not be the craze that it was,’ Maureen Dowd states, ‘but women are still in thrall to the standards of beauty set by the celebrities on their screens.’ She also feels that some of the gains made by women in the past are now at risk, in an age when cosmetic surgery is commonplace among women in the public eye.

‘There were a lot of pretty girls who went by the wayside,’ said director George Cukor, recalling Hollywood’s golden era. Another director, Joshua Logan, described Marilyn as ‘one of a kind.’ When Monroe died, Dame Sybil Thorndike remembered her as ‘not a typical film star…a lovely, innocent person.’ Her death marked the passing of an era, she predicted.

Neuroscientist Susan Greenfield agrees that Monroe’s style ‘was highly individual, and she had a face like no other.’ Many of today’s famous women, like Paris Hilton and Kim Kardashian, are ‘missing the aspirational quality that Marilyn had,’ Dowd laments. She fears that women like Sarah Palin are ‘taking us back to the Eisenhower era,’ pointing to the ongoing debate on birth control. She cites William F. Buckley, who founded the political magazine National Review in 1955, as an example of a more enlightened conservativism.

Despite the many changes in our society, Marilyn Monroe remains one of the world’s most celebrated women. Some of her poems, published for the first time in Fragments (2010) are read by actress Isabel Keating. A recent TV series, Smash, focused on an attempt to stage a Broadway musical based on her life. Some alleged tributes are rather shallow, such as plans to present Monroe onstage as an all- singing, all-dancing hologram, and a mooted TV show called Finding Marilyn. Dowd notes the irony of trying to duplicate a woman widely regarded as inimitable.

But Harvey Weinstein, producer of My Week With Marilyn, praises Monroe’s curious mind, describing her as ‘the kind of girl that I want my daughters to grow up to be.’ Perhaps, then, Marilyn’s enduring appeal is not simply the legacy of a dumb blonde, but a belated understanding that, after all, she had so much more to offer.

The Meaning of Marilyn