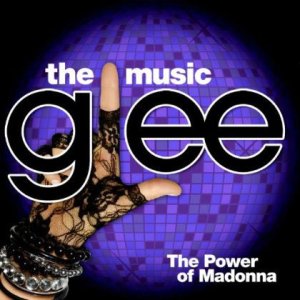 ‘Power of Madonna’ is the 15th episode in the Fox TV series, Glee, featuring a show choir or ‘glee club’ in a fictional Ohio high school. The choir tends to attract the quirkier, less popular students, encouraged by their Spanish teacher, Will Schuester (Matthew Morrison), and their rivals, a cheerleading team led by Will’s arch nemesis, P.E. instructor Sue Sylvester (Jane Lynch.)

Media buzz was generated last autumn when Madonna granted the Glee team full rights to her musical catalogue. Since Celebration, her definitive hits collection, was released to a warm reception that September, Madonna has reached out to a new generation of ‘wannabees’ with various offshoots including a ‘Material Girl’ fashion line for Macy’s department store.

Glee was not a show that appealed to me initially, but the combination of my all-time favourite pop star and Jane Lynch, one of the best character actresses around, proved irresistible. As a youngster I was a huge fan of Fame, another ‘high school musical’ sensation. Shortly before Madonna’s first album was released in 1982, she had auditioned (unsuccessfully) for the spin-off TV series.

‘Power of Madonna’ begins with a journal entry from the formidable Sue, confessing her idolatry for the Queen of Pop. She decides that her team of ‘Cheerios’ would benefit from Madonna’s empowering presence, and demands that La Ciccone’s music be blasted across the school building.

Later, Will overhears the Glee girls bemoaning their fraught relationships with the opposite sex.  ‘Guys don’t care about our feelings’, they tell him. Inspired by a cheerleader dance to ‘Ray of Light’, Will, along with guidance counsellor Emma, vow to ‘save one girl at a time’ with Madonna’s uplifting messages of strength, independence, and equality.

Standout numbers include a ‘Borderline’/’Open Your Heart’ mash-up, a duet between Rachel (Lea Michele) and Finn (Cory Monteith), and a montage performance of ‘Like a Virgin’, switching between three couples preparing to make love for the first time. The emotional consequences are handled with taste and sensitivity.

The highlight of the show, however, is Jane Lynch’s frame-by-frame remake of Madonna’s ‘Vogue’. Later on the Glee boys, initially threatened by Madonna’s aggressive sexuality, perform an acoustic ‘What It Feels Like For A Girl’, while the girls take on ‘Express Yourself’. Led by Sue Sylvester, the Cheerios produce a militaristic ‘4 Minutes’, and finally ‘Like a Prayer’, with the full cast accompanied by a gospel choir.

Just before ‘Power of Madonna’ screened, Madonna spoke to US Weekly, describing the episode as ‘brilliant on every level. The dialogue and the entire script was genius…’ Reports indicate that a second ‘Madonna episode’ may be in the works, possibly featuring a star cameo. Furthermore, the Glee cast’s ‘Power of Madonna’ EP is now topping charts worldwide, and has boosted sales of both Celebration and Madonna’s latest live CD/DVD, Sticky and Sweet. 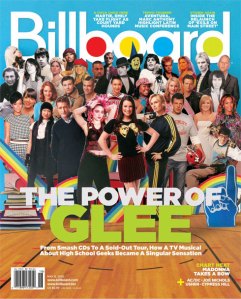